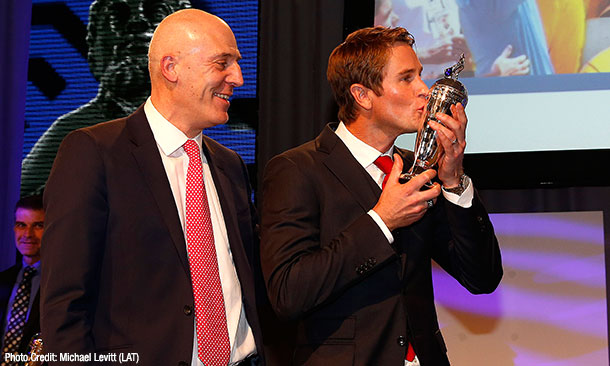 Ryan Hunter-Reay envisioned the perfect location for his "Baby Borg" before winning the 98th Indianapolis 500 Mile Race in May 2014. Preparation always has been key for the 34-year-old Verizon IndyCar Series driver from Fort Lauderdale, Fla., who earned the series drivers' title in 2012.

"It's (going) front and center on a shelf by itself in my office at home. That and the championship trophy go together, but the Indy 500 is the one I'm most proud of," said Hunter-Reay, who was presented the BorgWarner Championship Driver's Trophy by BorgWarner CEO James Verrier during a dinner Jan. 14 as part of the Automotive News World Congress.

"I think seeing the likeness on the Borg-Warner Trophy in early December really brought it home to me," said Hunter-Reay, whose wife Beccy is expecting the couple's second child in early March. "I remember so many years going into that museum and staring in awe at the faces on that trophy.

"Winning the Indy 500 is a dream come true, and just to have my name on the Borg-Warner Trophy amongst all the legends of the sport means the most to me. To finally bring something home now is great."

The first recipient of the BorgWarner Championship Driver's Trophy was Rick Mears, winner of the 1988 Indianapolis 500.

Hunter-Reay held off three-time Indianapolis 500 winner Helio Castroneves by 0.600 of a second – the second-closest finish in race history – following a six-lap duel to the checkered flag as hundreds of thousands of spectators and millions of TV viewers stood and cheered.

"If I made a pass one lap earlier or a lap later, or if Helio would have passed me two corners earlier, the rhythm of how it finished would have been thrown off and I might not have been the guy crossing the bricks first," said Hunter-Reay, who led a field-high 56 laps and averaged 186.563 mph in the No. 28 DHL Honda. "Luckily, there was no strategy to it; it was just go for it."

"I'd say this one was really special in a lot of ways," Andretti said. "One is it was with Ryan, who has become part of the family, and it was the first time as Andretti Autosport. Then the way we won it. Those last six laps were some of the most exciting in Indianapolis 500 history.

"I wasn't fortunate to win the race as a driver, but to have three wins as a team owner is really special. It says that we've done a good job as a team over the years. It's the most special race in the world and when you win it stays with you the rest of your life."

BorgWarner, which began its association with the Indianapolis 500 in 1936, supplies the engineered for racing twin turbochargers for Chevrolet's and Honda' 2.2-liter, V6 engines used in the Verizon IndyCar Series.

"The Borg-Warner Trophy was created as a symbol of technology and innovation in racing, and it has become not just the most prestigious trophy in racing but the greatest trophy in all of sport," Verrier said. IndyCar.com