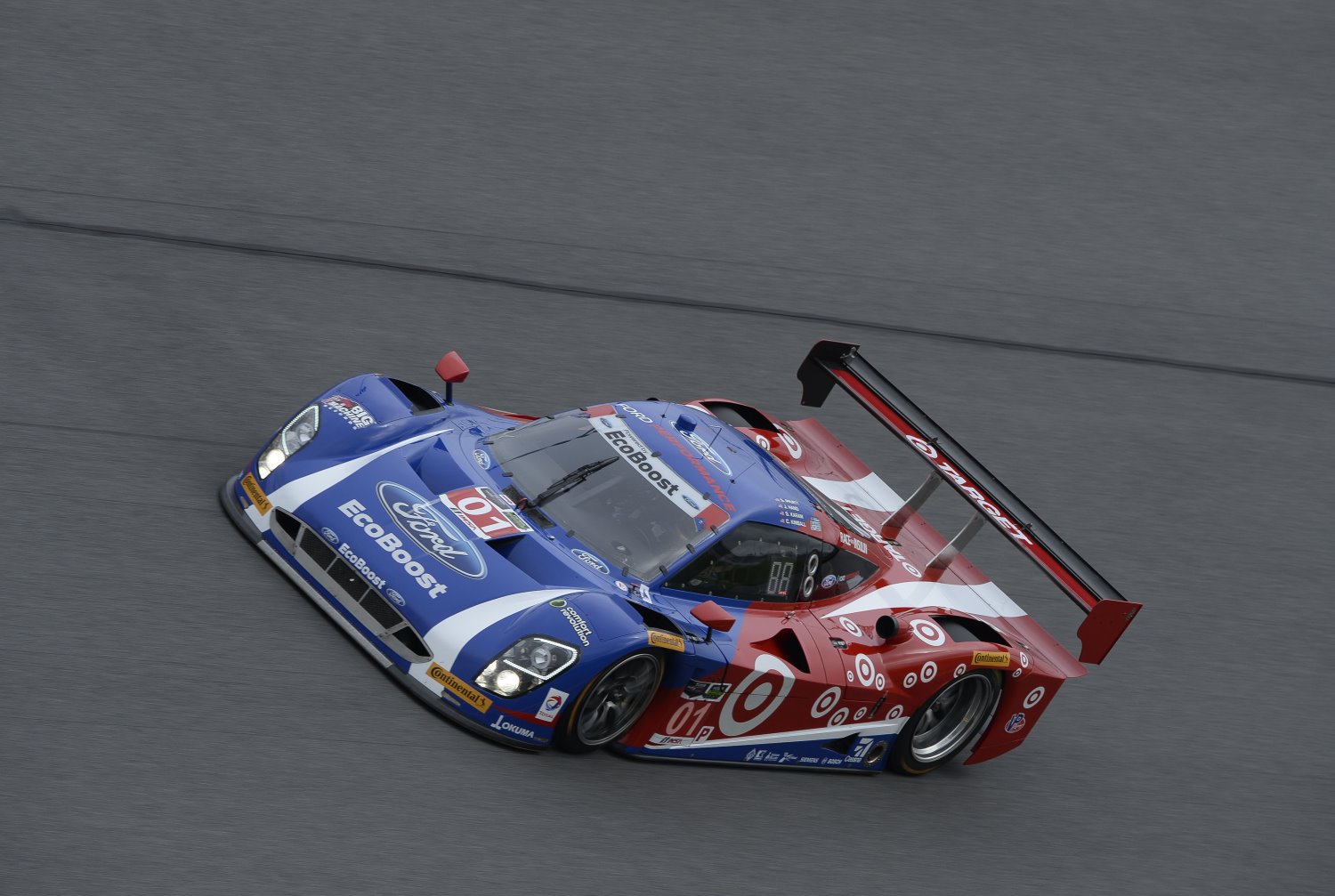 Taking steps toward a record sixth overall victory in the Rolex 24 At Daytona, Chip Ganassi Racing with Felix Sabates ran 1-2 in Friday's opening day of the Roar Before The Rolex 24, a three-day test at Daytona International Speedway to open the 2015 TUDOR United SportsCar Championship season, as well as the Tequila Patron North American Endurance Cup.

Joey Hand recorded the fastest lap of the day, running one minute, 39.397 seconds in the No. 01 Ford EcoBoost/Riley co-driven by Scott Pruett, Charlie Kimball and Sage Karam. Scott Dixon was second fastest, turning a lap of 1:39.406 in the No. 02 Target Ford EcoBoost/Riley shared by fellow Indianapolis 500 winner Tony Kanaan and NASCAR Sprint Cup Series regulars Jamie McMurray and Kyle Larson.

While Porsche North America led the way in GT Le Mans (GTLM) in the afternoon session, it was Lamy's lap of 1:44.414 in the No. 98 Aston Martin Racing Aston Martin Vantage that was fastest on the day. Porsche North America also is off to a strong start in its quest to win a second straight Rolex 24, with Nick Tandy second on the day with a lap of 1:44.486 in the No. 911 Porsche 911 RSR.

A pair of Prototypes made their official Daytona International Speedway debuts Friday with Tequila PatrÂ¢n ESM shaking down its No. 2 HPD ARX-04b/Honda and Michael Shank Racing with Curb-Agajanian and Krohn Racing turning laps with their new Ligier JS P2s. Of the new entries, Michael Shank Racing was third on the day with Ozz Negri's lap of 1:39.517 in the No. 60 Honda-powered Ligier JS P2. Tequila PatrÂ¢n ESM just took delivery of its No. 1 HPD ARX-04b/Honda Friday and the team hopes to have that car on track by the end of the weekend.

Starworks Motorsport came roaring out of the gate on Day 1 in the Prototype Challenge (PC) class. Renger van der Zande's lap of 1:42.360 in the No. 8 ORECA FLM09 was 0.339 seconds quicker than runner-up Bruno Junqueira in the No. 11 AutoMaxUSA ORECA FLM09.

"It's exciting for me to be involved with Ford, period, no matter what we do. Putting them back in victory lane at Sebring overall was magical. If we could get to victory lane here with Ford, it would, again, recreate that magic that's there."

"It's been a real pleasure to join the Corvette Racing team, and it's great to be part of the Team Chevy family. The Corvette C7.R is a beautiful car – really a super-cool race car. It's very close to what I feel in a single-seater. I have to get used to the brakes and how it feels with the weight compared to an IndyCar."

"The Honda coupe ran flawlessly all day. It is difficult for us at the moment because we're trying to finish the second car in the garage. Today we ran six drivers in the one car. Our focus was cycling through the drivers, getting laps and being comfortable in the car. The Roar Before the 24 is deceiving because you always think you have a lot of time here and that's not the case. Before we know it, we're qualifying and racing the Rolex 24. It is important that every Tequila PatrÂ¢n ESM driver gets laps during this three-day test. We've worked through a few things. I think everyone is pleased so far and we'll make changes overnight."

"This is my first day in the DeltaWing. It's a very unique feeling, because I'm driving one of the most revolutionary cars in the history of motor racing. But as unique as it looks, it drives really well. Most drivers, including myself before I drove it, think ‘how does it turn?' I can tell you – it turns very well. We were third quickest and I had a quick lap. But this is just the first test. There's a lot of work to do. I'm really happy working with all the crew, with Tim Keene, who I know very well, and with (race engineer) Alan Mugglestone."

"The team did a lot of development work last year with the car which is carrying over into this year. We tested here in November, showed some good pace here, and we are just working on a comfortable car, which we have right now. That consistency in the car is really the only thing we need to be working on. That's what you need here, on the long runs, the double stints; you need to have a comfortable car that is easy to manage through traffic.

"We're still sorting out some problems with the car, so there's more to come. Last year, we had 27 fastest laps (in the Rolex 24), so our speed here is very good – which we showed again today."