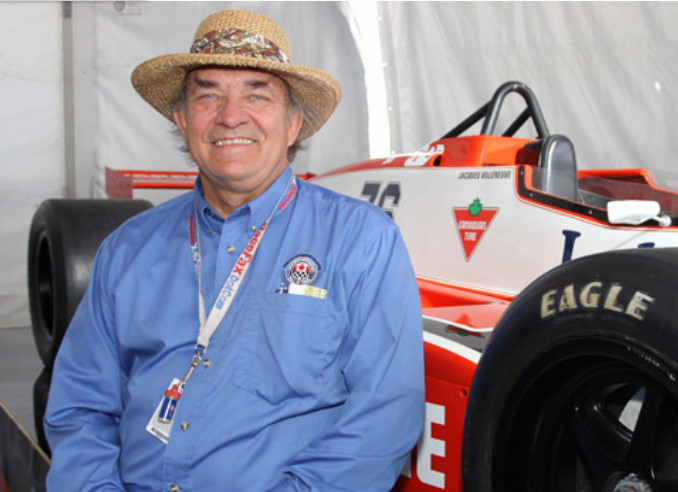 Gary Grant reported in last Saturday's Toronto Star Wheels the passing of Paul Bryan, a long-time volunteer marshal who was a friend and mentor to many of the marshals working to keep racers and racing safe these days.

Now the motorsport community has lost another giant with the news that George Daszkowski died at the weekend following a lengthy battle with cancer.

When I think of George and racing, I think of passion. He was passionate about the past and the present. He was not too optimistic about the future, though, but we'll come back to that.

The passion that I speak of centered around the Canadian Motorsport Hall of Fame, particularly the archives. Although he was a walking encyclopedia of racing knowledge, he believed strongly in the storing, filing and indexing/cross-referencing of photographs and documents in order to create and maintain a historical record of the sport.

"You watch," he told me once when we met for dinner at Snug Harbor, a restaurant in his beloved Port Credit. "If the archives are not nurtured and preserved, they will be lost. People can say not to worry about it but if there isn't constant attention, things can go missing. When something's gone, that's it: it's gone."

It bothered him that not all associated with the Hall shared his vision.

I used to tell George that I was jealous of him.

"Because how many guys can say they were Jackie Stewart's driver?"

It's true. Jackie Stewart, three-time world driving champion, didn't like to drive on the streets of Canada, so every time he came to this country, George Daszkowski was his chauffeur.

Hey, it can't get any better than that, can it?

As you can imagine, the tributes have been flowing in recent days.

John R. Wright of Kitchener sent me this:

Rod Campbell of California had thoughts:

"He was a good friend of mine and a font of information about Canadian motorsport. I will miss him. He was the key person to get me, Maurice McCaig and Daniel Thompson involved in the effort to rebuild the Canadian Motorsport Hall of Fame."

Allan De La Plante is the finest motorsport photographer in Canada and he posted this tribute to Facebook:

"In 1994, I had the hair-brained idea that I wanted to re-issue my 1982 book on Gilles Villeneuve. I let it be known that I was looking for anything that had been missed during the first production. In 1982 there was no Internet, so communication was a problem. In 1994 I was just recently connected to the 'Net and excited by some of the connections I could make.

"One day I woke to an email from some guy who called himself 'George the Car.' It turned out to be one George Daszkowski. George and I became good friends. I found that every time I needed a question answered, George was there. He was hyper-connected. He found a designer. He counseled me on the CD-ROM I wanted to put with the book. He test drove the CD-ROM in its final stages. He read drafts of my text. I had lost contact with Jackie Stewart over the years and he put us back together.

"When the title of the book was wandering around in my head, George came up with ‘Villeneuve: A Racing Legend.' He was a constant source of anything I needed and then some. George always thought outside the box. Some could not understand what he was up to, but George's expert communication skills and sense of humor would always win over anyone sitting on the fence.

"I know George spent a lot of time and probably his own money with the Canadian Motorsport Hall of Fame. His dream and passion will one day become a reality when the Hall has a permanent home.

"The last time I saw George was while shooting an Indy race in Toronto. I was not excited about going to see him as I did not know what to expect. His spirit was strong and lively even though he must have been in great pain. His sense of humor was very much intact and when the subject of racing came up his spirits soared and his opinions flew in all directions."

I mentioned earlier that George was not exactly bullish on the future of racing and that was why he was so adamant about preserving anything and everything having to do with the sport.

We had a chat once about his pessimism and he compared auto racing of today to air racing of yesteryear.

"At one time, air racing was immensely popular," he said. "It was fast and it was dangerous and it gave everybody a thrill. But after awhile, the casual fan turned away because it was just the same thing, over and over.

"I think auto racing is reaching that point, if it hasn't already. Yes, those of us who can't get enough of it will always follow it and love it but the average spectator will start to drift off and I think, eventually, just like air racing, auto racing will peter out."

Did George know what he was talking about? The answer might be found in declining TV ratings and the fact that speedways everywhere, from Indianapolis to Daytona, are taking out seats and eliminating grandstands rather than adding them.

George Daszkowski was one of the toughest and most determined people I ever knew. I'm talking about his battle with cancer here. It is such a wicked and perplexing disease and no two people seem to handle it the same way, so comparisons are unfair.

But be that as it may, they pretty much told George four or five years ago that he didn't have long to live and so he set about settling his affairs. He sold his Port Credit-area house and did all the other things one does in preparation – but then he didn't die. In fact, he moved back into an apartment and away from death.

But the fight – as it always does, it seems – simply got to be too much. He made the decision awhile ago to stop treatment and let nature take its course and he made it to 2015 but that was about all.

As Allan De La Plante said in his tribute:

"This is my second venture into the final lap of a friend with the death just last week of Paul Bryan, also an anchor in Canadian motorsport. It is the likes of both of these men, who I gladly call friend, that give our sport the deep texture and color that we all enjoy. I suspect Paul has already handed George a beer and they are anxiously awaiting the new season of racing."

I suggest there's a real party going on somewhere, because Jim Paulson and Gary Dolson and a host of others who've left us way too early will all have bellied up to the bar as well.