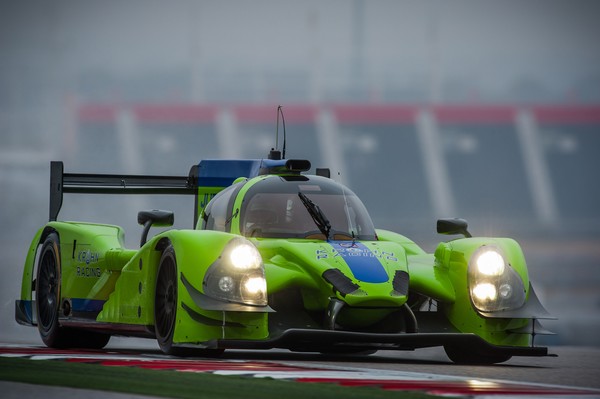 The Krohn Racing team is eager to return to the high banks of Daytona International Speedway for the Roar Before the 24 test days, January 9-11, 2015, in preparation for the Rolex 24 At Daytona later this month.

The team, owned by Tracy W. Krohn of Houston, Texas, will pair with his long-time teammate, Swede Nic Jonsson for their 11th consecutive Daytona effort. They have added Onroak drivers Olivier Pla and Alex Brundle to the Krohn team for the Roar and 53rd running of the Rolex 24 At Daytona, round one of the 2015 IMSA TUDOR United SportsCar Championship.

Frenchman Olivier Pla competed in the 2014 running of the Rolex 24 with Oak Racing in the Morgan LMP2 Nissan to an eighth place finish. Alex Brundle drove with Muscle Milk in the Oreca Nissan to a fifth-place finish, both competing in the P class.

Krohn Racing received delivery of their new LMP2-class Onroak Automotive-built Ligier JSP2 race car in late November and immediately began an extensive testing program, which totals eight days prior to this weekend's Roar Before the 24 test days. Pla worked with the team at their shakedown in Estoril, Portugal in November 2014 and Brundle joined Krohn and Jonsson at a private test at Daytona in December.

GARY HOLLAND, Krohn Racing, Team Manager: Tell us about Krohn Racing's driver line-up for the Roar and Rolex 24 At Daytona for 2015.

"We are pleased and excited to have Alex and Olivier joining Tracy and Nic as part of our team for the ROAR and Rolex Daytona 24 hours. The IMSA TUDOR championship is entering its second year and we believe will be even more competitive than 2014.With Krohn Racing stepping up to the "P" class with our Ligier – Judd, we want Daytona to be a statement of intent for the year and think that our driver line up shows this. The team has worked tirelessly to ensure that we are as prepared as we can be for the huge challenge that Daytona will be. We firmly believe that this is the correct time to be stepping up to the "P" class with IMSA making great strides towards ensuring there was parity between LMP2 and DP cars at the end of last season; we have confidence that this will continue in the right direction in 2015.

Of course, it is very difficult to have a 24-hour race as the first race of the season, let alone do it with a new car and engine combination; however, with our partners at ONROAK and Judd, we believe we can come away from Daytona with a strong result."

"We had a lot of discussion concerning the driver lineup for the 24 Hours of Daytona. There are so many excellent drivers with loads of experience and proven records, so it was a quality problem trying to determine who would be best for this race. All that said, we decided that we would be best served by relying on proven drivers with the most time in the Ligier chassis. We think that with Olivier Pla and Alex Brundle we have met all of those specs and more. They are both proven champions and have done much of the development work on the Ligier chassis and Judd engine combination. We couldn't be more pleased."

On his commitment to sports car racing with the recent purchase of the Ligier JS P2, pairing with Onroak and Judd for the car and engine development, an extensive testing program since receipt of the car and now hiring top-notch drivers for the first race at Daytona:

"The primary goal is to get back to a winning combination of car/engine and driver. That will make it easier to attract sponsorship and interest in our team. We had a lot of success in the past with Daytona prototypes and different engine combinations. We do expect more from this Ligier/Judd LMP2 in the way of performance.

While I enjoyed driving GT class, it was time to get back to a higher downforce chassis. It is a real challenge, but at the same time it is a truly sophisticated and elegant machine that any driver would appreciate. Testing has gone pretty well and we have already incorporated many of the things that we have learned from those different tests as well as having gained overall knowledge of the performance of the Ligier/Judd car at different tracks.

Overall, this is a fantastic car that is both predictable and very physical for the drivers. It's really a great ride!"

NIC JONSSON, Krohn Racing, Driver: YWhat do you think Olivier and Alex will be able to add to the team for your inaugural race?

"With both Olivier and Alex being the two guys who have been doing most of the development work on the Ligier JSP2 car over the last season, I believe it invaluable what they bring to the table. Besides having the most experience of the Ligier car, they also are two world-class drivers and team players that we are going to enjoy and benefit from at Krohn Racing for the Daytona 24."

How much does being a test driver with a new car count when it comes down to racing?

"I think that every time you can have a test driver of a car in your driver line up, it's a great value since they know for the most part what works and not, along with understanding the cars strength and weaknesses, so we can take care of the car in the best possible way and have a solid car for the duration of the 24 hours."

You and Tracy have had a who's who of co-drivers at Daytona over the years. Olivier and Alex are no exception. How are you able to draw such stellar drivers to join the small independent Krohn Racing team?

"Even though Krohn Racing is an independent team, it's a first class team and operation with world-class people working there, which makes the team an attractive team to drive for. Krohn Racing has always had top-notch equipment and been able to attract excellent drivers that has helped to put Krohn Racing on the global map of racing with very good results, such as podium finishes at Le Mans, as well as victories at Sebring 12 Hours, Petit Le Mans and others. Every top driver wants to be associated with good and first class operations such as Krohn Racing. And this year is no exception."

"I'm really happy to come back to the U.S. with Krohn Racing, joining Tracy and Nic in their new Ligier JSP2 Judd-powered. I have done all the testing and development with Alex with Onroak so we know the car perfectly. I had the chance to meet the whole Krohn Racing team when they tested the new Ligier for the first time at Estoril and the way they operated make me feel we have a very strong package all together and with all the extensive testing the team has been doing I just can't wait for the 24 Hours of Daytona!"

"I am delighted to be joining Krohn Racing for the Roar test and the 2015 Daytona 24 Hours, supporting their efforts in debuting their new Ligier JSP2 Judd, which has undergone extensive and successful testing in the lead up to its debut at this prestigious 24-hour classic.

"Having been a part of the development team, alongside very talented engineers and designers from Onroak Automotive, it will be particularly satisfying for me to be part of the car's debut at the Daytona 24 hours. know how tough this race is from previous experience on the high banks, so I look forward to bringing my full focus, as always, to do the best possible job for Tracy and the team. I would like to thank them for the opportunity to continue and expand my career in the TUDOR United SportsCar Series."