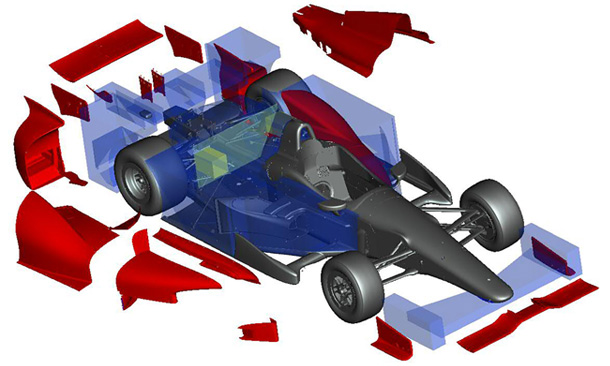 IndyCar aerodynamic development chief Tino Belli says there will be "many differences" between rival aero kits produced for the 2015 season.

Chevrolet and Honda are manufacturing and supplying kits – to be fitted to the standard Dallara chassis – for speedways and road and street course/short oval events.

One road and street course/short oval kit is due to be delivered to each entrant by March 1, with the speedway kit following on April 1.

"Differences between the 2014 Dallara chassis and the 2015 aero kits and between the Chevy and Honda aero kits will be quite easily spotted by an interested fan," explained Belli.

"Especially to someone who is interested in technology, they'll see many differences between the cars. At speed and with different color schemes, it might be more difficult to see the differences.

"It's certainly not going to be a spec car, and it's not spec even within the Chevrolet or Honda environments.

"The Chevy might not always run in exactly the same configuration between a Penske and Ganassi car, and the same with Honda between, say, an Andretti and Schmidt Peterson Motorsports car because teams will have options."

"The engine cover, sidepods and rear wheel guards are common between the speedway and road/street course/short oval packages. On the speedways, the manufacturers can do a new front wing main plane, rear wing end plates, front wing end plates. Teams are allowed use optional components that fit to the sidepods, engine cover and rear wheel guards such as winglets and flicks.

"The teams will have quite a lot of things they can play with if they decide that they can come up with a better solution for their particular requirements and their driver or car set-up. The car set-up is not only going to be a downforce level like a wing angle, springs, shocks, toe and camber. If a particular type of mechanical set-up needs an aerodynamic solution, they can try what they like.

"We believe there will be a reasonable number of components that the manufacturers will homologate as optional that a team could investigate to see what could give it a better solution on a particular racetrack. An example is the Indy road course, which because of the length of the straights is a low-drag racetrack. You can image teams coming up with a hybrid speedway/road course solution. They can't put on a speedway front wing on a road course, but they could perhaps use speedway sidepod options.

"Another thing we're allowing is all of these optional components can now be changed between qualifying and the race. A team could decide to go for a super low drag qualifying set-up and use the newness of the tires to try to get the speed and then revert to a more high-downforce race set-up, which could mean a change in some of the components on the sidepods, wheel guards and engine cover. For a long time, we had what you qualified with is what you raced.

"The same will be true for the Indy 500 with the optional components. In qualifying for Indy you might put on all your lowest drag optional components or choose to emit components, and then for the race you might decide there is some sidepod winglet that might give you better handling characteristics or is more efficient.

"On the road course in addition to the sidepods, engine cover and rear wheel guards is the front wing flaps and end plates, and the rear wing end plates. The rear wing is a standard Dallara main plane for all events except for the Indy 500, during which teams can choose between the Dallara or their manufacturer's main plane. The engine air intake will be different from the Dallara chassis, too."

Official track testing of prototype components began in early October and will conclude on January 18, the same date as homologation.