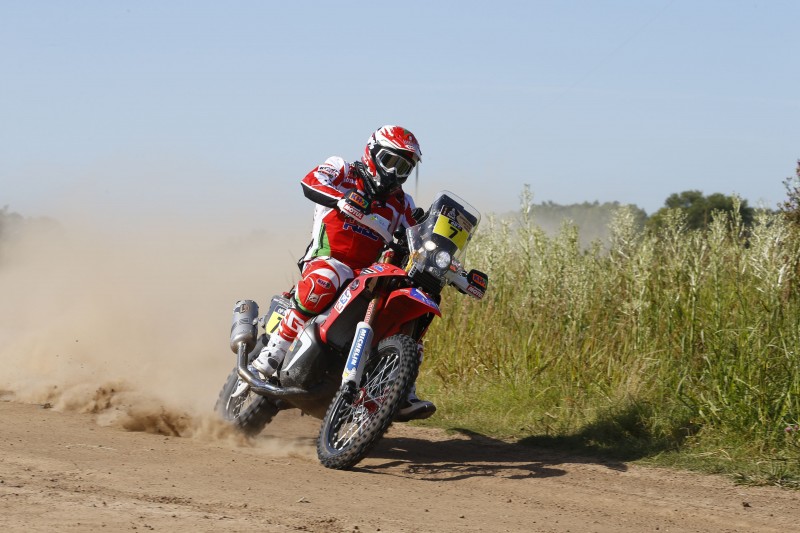 Countdown. Revs up. Clutch out. And with a roar the Dakar Rally exploded into life today. With three riders finishing the special in the top six, the race for Team HRC is most definitely underway.

Yesterday, was a chance for the riders to lap up a warm welcome from the thousands of fans gathered along the streets of Buenos Aires. Today, an altogether harsher greeting awaited as the first stage took to the track. Team HRC's five riders all finished in the first seventeen positions.

The first of the Dakar's specials, at only 175 kilometers, was barely enough to unfold any significant differences, but already the pecking order is beginning to establish itself. Paulo Goncalves rode a cracking pace aboard the Honda CRF450 RALLY, to finish in second, just five seconds behind the specials winner.

Joan Barreda, after setting off in the special at Baradero from second place, put in a fairly effortless and prudent performance. The Spaniard claimed fourth spot, 1:41 off Sunderland.

Jeremias Israel stormed his way to a final sixth place, tucked in behind the leaders, and Laia Sanz got acquainted with the track, riding a trouble-free special to finish in seventeenth.

The squad arrived at the bivouac in Villa Carlos Paz after a lengthy liaison section of around 500 kilometers, where preparations for the second stage are already underway. The stage will be disputed tomorrow between Villa Carlos Paz and San Juan. The first dunes of the Rally Dakar 2015 will be there to welcome the participants. The longest stage
Any rest will be short-lived, because before reaching San Juan, the competitors will have a particularly busy schedule: quite simply the longest special stage in the rally, which is varied enough to unsettle even the most experienced of drivers. Hard terrain at the start of the race will be followed by dusty sections in the middle of the day and a sandy stretch to finish. This is the first real test, which can only be successfully overcome through constant vigilance.

Paulo Goncalves 2ND + 00'05
The first special served as a good warm-up. 175 kilometers and 700 liaison. It went well, with a second place, which was great. But it's a very long and hard rally. You must have great team-work, be very focused, not make any mistakes and keep the mechanical and physical aspect in as good shape as possible, as this is not only a very long race, but a very tough one too.

Joan Barreda 4TH + 1'41
A very quick stage, we got up to some high speeds, and it was difficult, as there was some damaged track due to the rain of the last couple of days. I caught up with Marc, but I stayed behind, taking it calmly. Let's see how the next few stages go.

Jeremias Israel 4TH + 2'16
It was a good, relaxed stage. We had to do 1000 kilometers, but the track was very fast and we had to accelerate to not lose time. I picked up quite a bit of dust from the other riders, and that brought down the pace, so I was able to take it easier and not take any chances. I think that it's a good position to tackle tomorrow's stage from.

Helder Rodrigues 12th + 3'32
The first day has been very fast for everyone. There are a lot of riders in a short space of time, and we shouldn't forget that the race has just started. Everyone has pushed hard. Me too. In the second half of the special I tried out the top speed and it was incredible! Maybe I didn't start out as well as I could have, but I'm not that far behind first place, and it's wide open.

Laia Sanz 17TH + 4'46
It was a quick stage, but with a lot of hazards, some of which were dangerous. I'm pleased that it went very well. I had to eat a lot of dust that came from Chavo Salvatierra, but I was able to get past him and I picked up the pace later. It was important, not only not taking risks, but not remaining too far behind, so as to be in a good start-position for tomorrow.

Javier Pizzolito 16TH + 4'32
The arrival today has been a good one as some of the candidates are already out of the race. It was a fast stage with hard track that put the mechanics under strain. We will be in a nice position, a very good one, to not pick up too much dust from the riders who are up ahead.