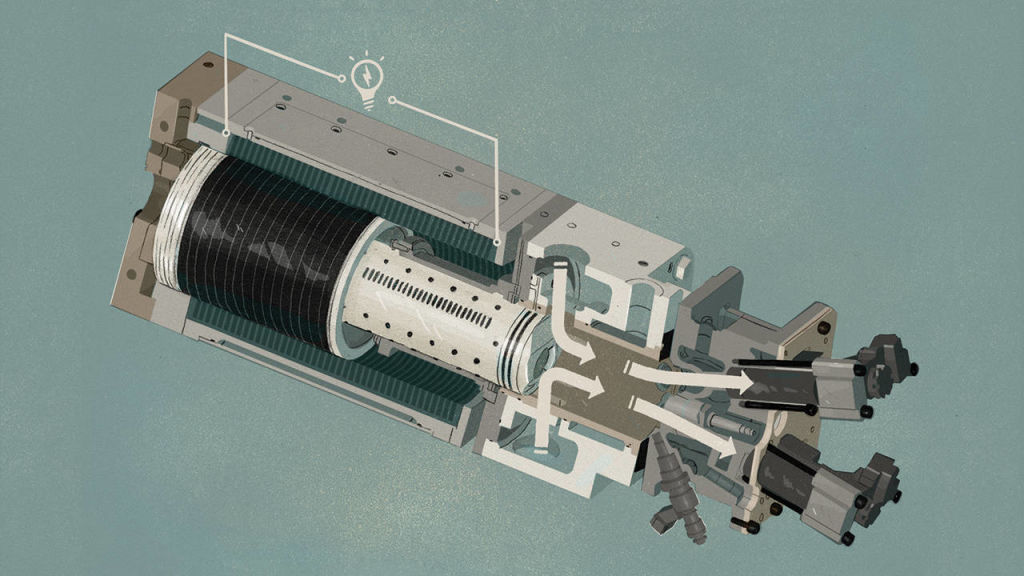 UPDATE Added video of how the engine works

12/12/14 Let's get one thing straight: The variable-valve-timing, direct-injection, turbo-wonderful powerplant in your new car is not cutting-edge. Despite the complexity of the modern engine, the fundamentals haven't changed since Grover Cleveland was in office. Pistons turn a crankshaft that eventually spins your car's wheels.
Yawn.

Electrically driven cars are the future. But until we have cheap, 1000-mile batteries, we still need range-extending fossil-fuel engines. Those devices don't need to turn wheels, just generate juice. The simple solution is to strap a generator to a piston engine, as BMW did with the two-cylinder range extender in its i3 EV. But if the engine never turns a wheel, there's no need for it to rotate anything. Why not cut out the middleman and use the piston's reciprocating motion to generate electricity? That obviates camshafts and most other rotating parts, too.

Toyota recently showed a prototype engine that does just that. It's called the Free Piston Engine Linear Generator (FPEG). "Free" refers to the fact that the piston isn't attached to a crankshaft; instead, as the piston is forced downward during its power stroke, it passes through windings in the cylinder to generate a burst of three-phase AC electricity. The FPEG operates like a two-stroke engine but adds direct gasoline injection and electrically operated valves. It can also be run like a diesel, using compression rather than a spark plug to ignite its fuel mixture.

Toyota says this mechanically simple engine achieves a claimed thermal-efficiency rating of 42 percent in continuous use. Only the best, most complicated, and most expensive of today's gas engines can come close to that number, and only in specific circumstances. Even better, a two-cylinder FPEG is inherently balanced and would measure roughly 8 inches around and 2 feet long. An engine of that size and type could generate 15 hp, enough to move a compact electric vehicle at highway speed after its main drive battery has been depleted. That's the future. Road & Track