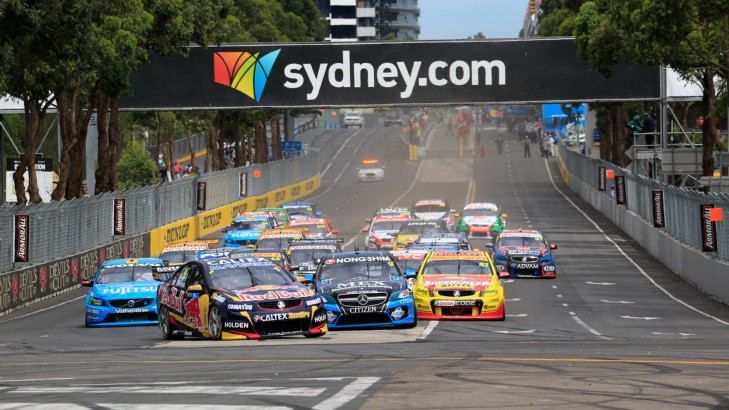 A fierce Sydney storm failed to halt the relentless march of all-time V8 Supercar Champion Jamie Whincup as he increased his already spectacular margin on a crazy day at Sydney Olympic Park.

The Sydney NRMA 500 was hammered by a massive downpour in the second of the two Saturday races – Whincup won the first – and the race was red flagged, the second time that has happened this year after the extraordinary scenes at the Supercheap Auto Bathurst 1000.

Whincup was superlative as the jet black clouds closed in and as always his team made the perfect call for wet tires moments before it bucketed down. With the track flooding, race control made the call soon after to stop the race.

They resumed under safety car but it was simply too dangerous to continue and officials ended the race with Whincup winning from Kiwi duo Shane Van Gisbergen and Scott McLaughlin.

"That was pretty loose out there, we weren't sure what was going to happen, I was thinking they were going to try and do a one lap dash at the end which would have been carnage," Whincup said.

"There's not enough dollars up pit lane to be tearing cars up. So, at the end of the day, race control did the right thing, there were big rivers going across the track."

"Everyone got wet and everyone will be walking around for the next five hours damp but it's much better than spending all night fixing a car."

"That's all I was concerned about. There's fifteen blokes in each team that will need to hang around all night at the end of the year so I was just thinking of them."

Despite the stoppages and shortened race the drivers received full points meaning Van Gisbergen jumped Craig Lowndes into third with the Kiwi now in with a shot to peg back Mark Winterbottom over the 250km final race of the season tomorrow.

"It's up to the other guys for me to move up, so I've just got to get the best results I can and them to make mistakes," said Van Gisbergen.

"I must be close to Lowndes now, I don't know what the gap is. It makes tomorrow's race pretty good, that'll be exciting we've just got to race those two guys and do the best we can. It's exciting to fight the top three in the championship."

It was a Sydney NRMA 500 double for Whincup who jumped out of the blocks with no signs of ambling around and collecting the Championship tomorrow, taking the first win of the weekend in race one.

The Red Bull racer started from the front row for the day's first race, and while he was jumped by Supercheap Auto Racing's Tim Slade as the compulsory pit stops played out, a lunge on lap 26 of 37 saw the points leader sail away to an eventual 3.1sec lead.

"Good times – there's plenty of pride on the line we want to round the year off in the best possible way," Whincup said. "Great battle with Timmy Slade, he got us in the pits, a bit of confusion with the safety car and I was probably a bit over-cautious … got leap frogged, had a great battle, that's what it's all about."

Second-placed Slade recorded his best result of the year, holding off David Reynolds in the Bottle-O Falcon, who also finished on the podium.

"The car's been really speedy all weekend," Slade said.

"I thought we were on there after the pit stop… but I don't know what Jamie was on, once he got by he was straight away."

The battle for second in the Championship turned on its head in the opener.

Lowndes had a huge crash in qualifying, his Commodore in doubt for the race. But the Red Bull crew pulled together and got the car out there – he came home 13th.

The red flag Lowndes caused, ending qualifying, meant Van Gisbergen was stuck starting 19th – but he climbed up through the field to finish sixth.

Man of the moment Marcos Ambrose finished 20th and 22nd, while his DJR stablemate Scott Pye ran into trouble, as did pole-sitter Will Davison, who suffered from a power steering issue.