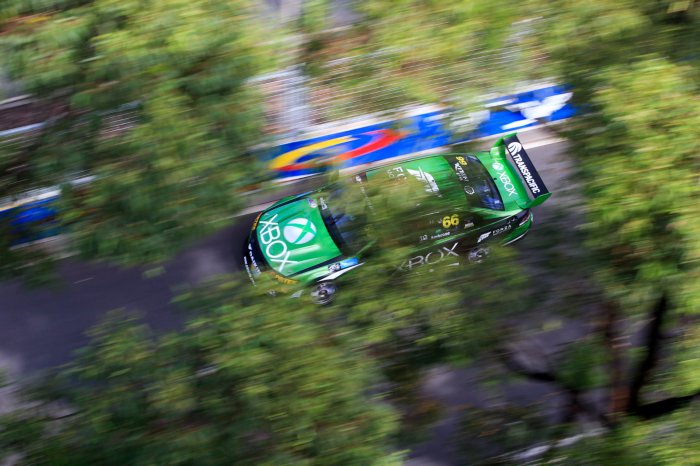 Marcos Ambrose says he has work to do ‘cleaning up bad habits from NASCAR' after a low-key first day back in the V8 Supercars saddle at Sydney Olympic Park.

Although Ambrose was classified in 24th in the final practice run, he is hopeful of capitalizing on the set-up of fellow DJR driver Scott Pye, who was fourth fastest.

The results were also affected by the age of the new rubber allocated to Ambrose due to his status as a wildcard entry.

Ambrose and his DJR-led crew that is filled with Team Penske personnel methodically ticked off a pre-planned work sheet through the three 20-minute practice sessions.

The #66 Falcon was 23rd and 22nd fastest in the opening two sessions respectively and had been at the bottom of the Practice 3 order before a late improvement after the checkered flag.

The 2003 and 2004 V8 Supercars champion declared that he needs to find more from himself, citing braking zone accuracy as a key area to address.

"I've got to improve my braking zones and clean my act up behind the wheel and when I can do that and I'm feeling comfortable the speed will come," Ambrose told Speedcafe.com

"Here, at this street track, there is no room for error and I'm trying to creep up on the brakes but it's kind of hard to here because the corners are hard to see.

"I don't know the limits. I haven't raced here to know as the track gets better, my brakes aren't keeping up with it.

"I've just got to get that feel and once I do I will be fine.

"I feel more consistent and better following that last practice after the spring changes so I will sleep well on that one and look forward to tomorrow."

Ambrose said tomorrow will prove the true gauge as to his progress against the rest of the field.

"We'll find out where we stack up tomorrow when everyone puts on the same tires," he said.

"We are not on as good a quality tires we could be just because the tires are allocated.

"I hope to be a bit more competitive than today.

"I'm enjoying it and I feel much better than I did at the start of the day.

"I'm going to use this time to really dig deep and just work on some technique and clean up some bad habits from NASCAR.

"Hopefully by Sunday afternoon we will be competitive." speedcafe