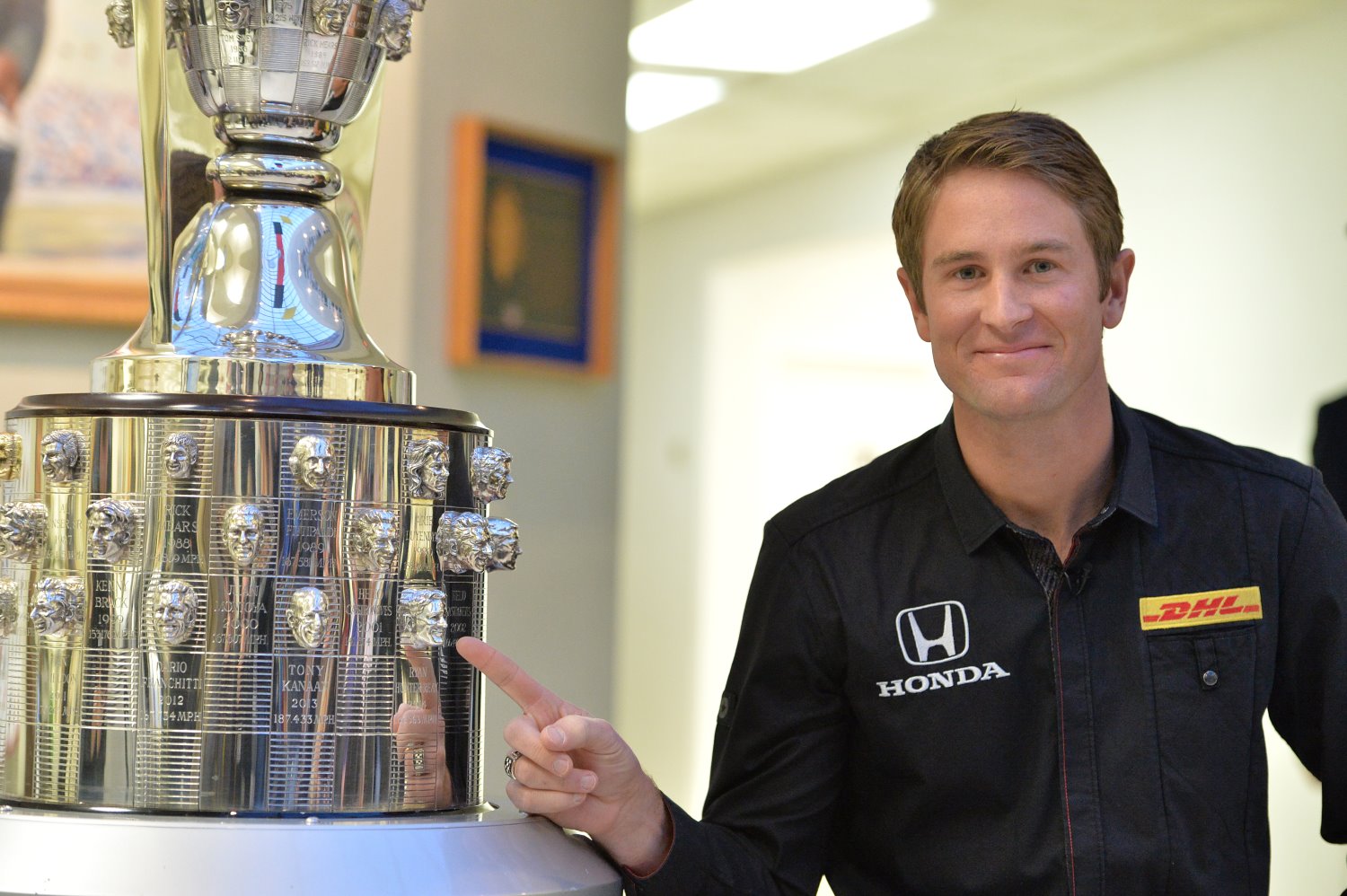 Ryan Hunter-Reay experienced one of the greatest spoils of victory for winning the 2014 Indianapolis 500 by seeing his likeness on the famed Borg-Warner Trophy during an unveiling ceremony today at the Indianapolis Motor Speedway Hall of Fame Museum.

Hunter-Reay drove his No. 28 Andretti Autosport DHL Honda to a narrow victory over three-time "500" winner Helio Castroneves by only .0600 of a second — the second-closest margin of victory in the history of the event – in capturing his first Indianapolis 500 on Sunday, May 25. Hunter-Reay, a resident of Fort Lauderdale, Florida, took the lead for good from Castroneves on Lap 199 to become the first American to win "The Greatest Spectacle in Racing" since Sam Hornish Jr. in 2006.

The Borg-Warner Trophy, which features the three-dimensional sterling silver image of every Indianapolis 500 winner dating to Ray Harroun in 1911, stays on permanent display at the Indianapolis Motor Speedway Hall of Fame Museum. To provide the winner with a personal keepsake, BorgWarner established the BorgWarner Championship Driver's Trophy (also known as the "Baby Borg") in 1988, which includes a duplicate image of the winner. The BorgWarner Team Owner's Trophy was established in 1998. Both sterling silver replicas of the Borg-Warner Trophy will be presented during the Automotive News World Congress in Detroit on Jan. 14, 2015.

"It is a lifelong dream come true to see my face accompany those of racing's greatest drivers on the Borg-Warner Trophy," said Hunter-Reay. "Being one of the 101 faces on the trophy is quite humbling. It will always be part of history and a moment I will remember forever. Now that I am part of the permanent trophy, the next exciting step is to receive my Baby Borg in January. I can't wait to receive it and take it back to Florida to share with Beccy and Ryden!"

Hunter-Reay won the Indianapolis 500 in his seventh career start after posting his previous best third-place finish in 2013.

"Ryan Hunter-Reay won the 2014 Indianapolis 500 in thrilling fashion, with the second-closest margin of victory in the event's history," said J. Douglas Boles, Indianapolis Motor Speedway president. "Ryan is a great competitor and a fantastic driver, so it's wonderful that his face will be immortalized on the Borg-Warner Trophy for winning 'The Greatest Spectacle in Racing.' He also now holds a unique piece of '500' history in being the first of our next hundred honored on the Trophy."

Among the 101 bas-relief images adorning the Borg-Warner Trophy, all are drivers, except for one. In tribute to his rejuvenation of the track and Indianapolis 500 following World War II, a 24-karat gold likeness of late Speedway Owner and President Anton "Tony" Hulman, Jr., was also added in 1988. In 1924 and 1941, two drivers shared the victory and a spot on the trophy, one for starting the race and the other for finishing it. Two bases have been added to the original trophy, providing added capacity for more winners until 2034.