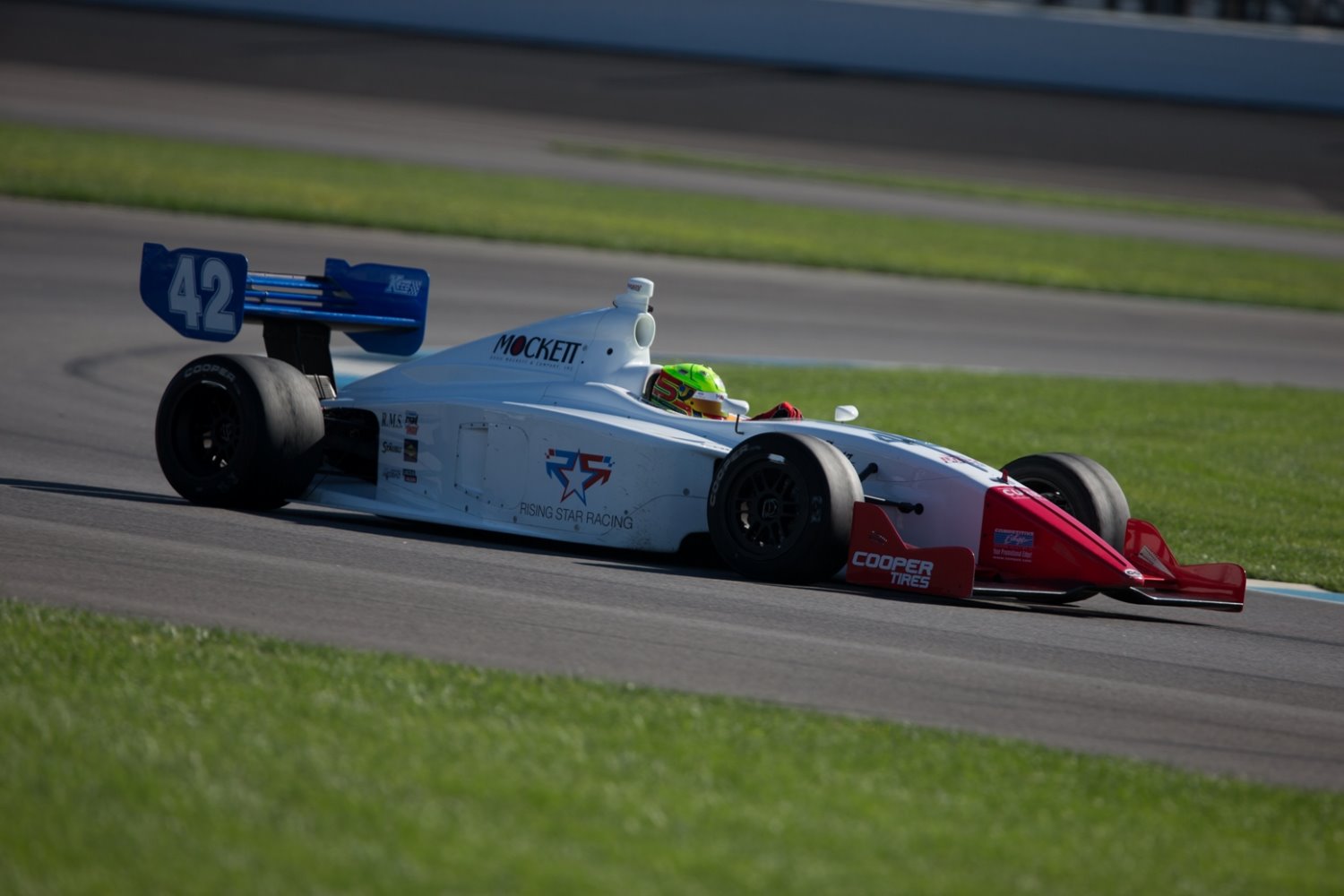 Indianapolis, Ind. (16 September 2014) – The 2014 race season may be over, but that didn’t mean it was time for Rising Star Racing drivers Josef Newgarden, Spencer Pigot and Neil Alberico to hang up their helmets just yet. Just a few weeks after the end to a stellar season for all three drivers, including a Pro Mazda Championship title for Pigot, the three were back in race mode over the weekend testing at the Indianapolis Motor Speedway.

At the Chris Griffis Memorial Test which saw cars take to the infield road course of the famous Indianapolis Motor Speedway, Pigot got the opportunity to put in laps in an Indy Lights car with Schmidt Peterson Motorsports with Curb-Agajanian. He quickly proved himself capable in the Indy Lights machinery as he topped all four practice sessions foreshadowing what he hopes to be a successful Indy Lights season.

“It was fun being in the Indy Lights car around the Indianapolis Motor Speedway," said Pigot after hopping out of the car. “The car was quick! A lot quicker than I am used to, so that was really cool. It seemed to handle really well as well. It was fun working with the guys, we made some good changes. It is nice to be in an Indy Lights car so soon after the end of the season. The car is quite a bit different and obviously faster and the brakes are different and it is also more aerodynamic. So it is a bit to get used to but so far it feels pretty good. It’s also nice to get the opportunity to run again so soon because I’m still fresh from the Pro Mazda season and haven’t had much of a break."

Alberico also had the opportunity to put in some more off-season laps in a Pro Mazda as he was tabbed to run with Andretti Autosport and topped the charts in his very first session on track. After taking third in the championship in his rookie Pro Mazda season, Alberico was excited to get to continue his momentum.

“It was a lot of fun," said an excited Alberico, of running the Andretti Autosport Pro Mazda machine. “Working with these guys was great so a big thanks to everyone at Andretti for giving me the opportunity. It is a good feeling to not have a long break and to get to be back in a car so quickly. Everyone thinks they aren’t going to get to do any driving until the season starts and here we are just about two weeks after the end of the season and I’m back in a car. So again, a massive thanks to Andretti for reaching out. We had an awesome season this year with Cape Motorsports. Those guys got me through a lot of tough races and we came out third in the championship as a rookie so I’m going to try and come up two steps bigger next year."

Mentor and fellow Rising Star Racing driver Josef Newgarden was on hand as well and got to have a bit of fun as he started the test weekend off by taking some laps in the new IL-15.

“I definitely had a fun first go driving the new car," said Newgarden. “I’ve heard so many things about the new Indy Lights car and obviously a bunch of the other guys have driven it already and done the brunt of the development work, but I think it is awesome. I thought it was super fun. It is definitely a great step for the feeder series to IndyCar. To me it felt much more like the DW12 feels which is great, because that is exactly what it needs to do, train the young drivers for the IndyCar series. Maybe even one day you will see drivers in both an IndyCar and an Indy Lights car in one weekend. As for my fellow Rising Star Racing guys, I am so excited for both Neil and Spencer and that they are both here this weekend as well. They both did a phenomenal job this whole season. There are always ups and downs in racing and they had their moments here and there and it’s really cool to see Spencer get an opportunity now in Indy Lights and it’s going to be fun seeing what Neil can do next year. They are both very talented and I think Spencer is going to really like this car and it’s just going to be exciting to watch them both next year."