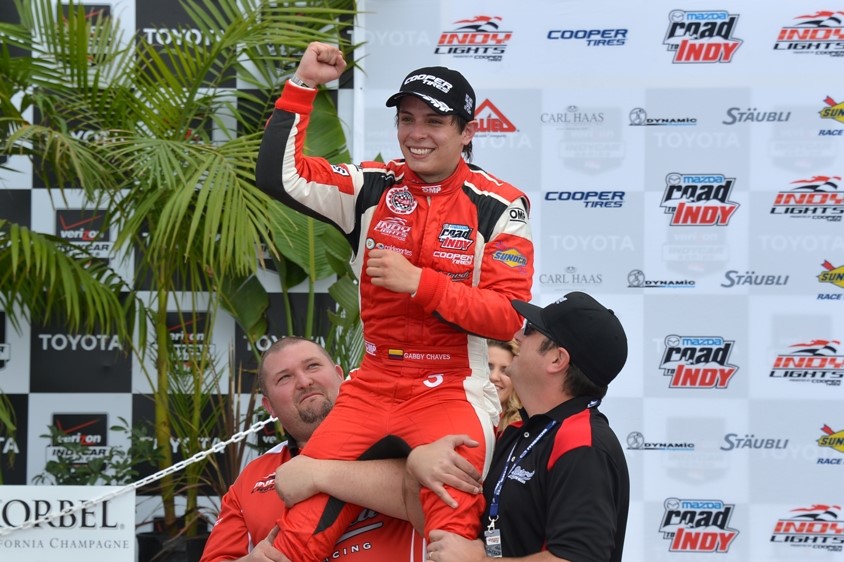 Newly-crowned Indy Lights champion Gabby Chaves is optimistic that he can capitalize on his title success with an IndyCar program next season reports Autosport.

Chaves beat Jack Harvey to the Lights title on a countback of second places following last weekend's finale at Sonoma.

While the Lights championship has long been accompanied by a substantial scholarship toward an IndyCar deal, Chaves is the first driver to benefit from a relaxation in restrictions over how that money can be used.

Previously, a driver was only granted their prize if it formed part of a budget for a full IndyCar season; a rule that prevented 2010 series champion Jean-Karl Vernay from ever making an IndyCar start.

The payout for winning the Lights title is now smaller but it can be used toward a part-program rather than a full one, and Chaves said that he intends to make the most of the opportunity.

"For sure I'll be doing the Indy 500," Chaves said. "The scholarship is there; you just have to figure out how to use it.

"Fortunately the scholarship is better than in previous years, so if you can start the season with the scholarship and get to the Indy 500, it's pretty likely that you're going to get some other help along the way.

"That's the approach I have to take when I am trying to make that jump." Autosport.com