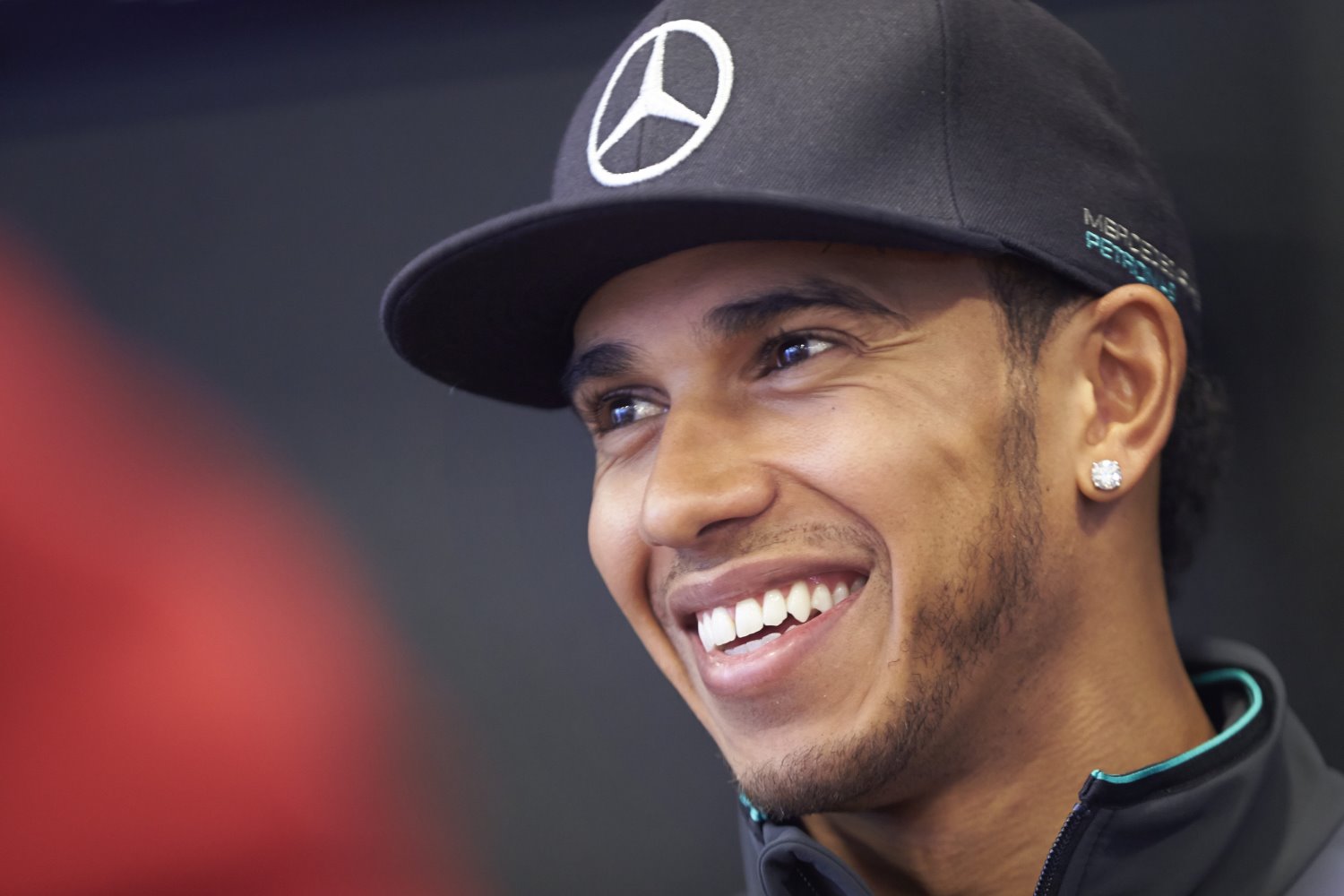 Lewis Hamilton spoke to the press to explain his views about his lap-two clash with Nico Rosberg, what happened in their heated race debrief, and if he can trust his team-mate anymore.

From your point of view, can you sum up what happened with Nico on the second lap?
Lewis Hamilton: "I don't really have a reaction, I think. This year, the team have allowed us to race and we've been good at racing wheel-to-wheel closely. I think I heard someone say it was inevitable we were going to crash one day; I don't feel today was that inevitability.

"I took the inside line, I had the corner. We braked very deep into the corner because if I'd braked early, he would have come down the outside, which would have meant he was alongside me through that section. We went in very deep but I still made the corner [with] the same normal line as I would do normally. And then I just got a big thud. And he was in my blind spot – well, I could see quite far behind me, I knew that he was behind so I continued my line…I thought for sure there'd be an investigation.

"I'm mostly disappointed for the team – and of course for myself because I lose points and that makes my championship a lot harder – but I'm really convinced this weekend that the team said ‘Okay, now we'll allow you'. I don't know why they suggested that – we already were racing hard with each other – but they said ‘Now we want you to be able to race'. And I don't know how literally he took that. Because for me the priority was still for the team to finish."

There's a fundamental issue isn't there, because someone was saying ‘Oh if Lewis had opened it up a little bit because he knew Nico was there'. And you think ‘Hang on, at what point does the guy in the lead have to start worrying about how much room the guy behind has got?' Because you can always back out of it if you're the guy behind, can't you?
LH: "It looked quite clear to me. We've just had a meeting and he basically said he did it on purpose. He said he did it on purpose. He said he could have avoided it. He said ‘I did it a prove a point'. He basically said ‘I did it to prove a point'. And you don't have to just rely on me, go and ask Toto [Wolff] or Paddy [Lowe] or those guys, who are not happy with him as well."

Niki said something about him provoking you?
LH: "There was no provoking, no. We were racing."

No. He did it because he wanted to provoke you…
LH: "I don't think he did it deliberately to provoke me. But if it was the other way round, we know – and you can ask Fernando [Alonso], you can ask all the drivers – when a car is less than half a car length alongside you and you're on the inside, it's your racing line. It's not your job to go massively out your way to leave extra, extra room. And it's not as though there's a wall; look at Sebastian [Vettel] the lap before. He was actually further up. And he knew he wasn't going to go up the outside, he was sensible about it.

"I was gobsmacked when I was just in that meeting."

Can you trust each other now?
LH: "Well I asked that question because I'd been told our job and what we'd been told to do is finish for the team. The team is the priority, always – even if they say we can race, the team is the priority. It doesn't mean we can go out there and crash into each other. I thought today was going to be a good day, either way. When I started second, I knew that I was on a different strategy to him, that we've had in the previous races, so I knew I'd be on my prime in the middle stint, so I knew I had a chance – if I didn't get him at the start then I'd have a chance later. I knew that if I overtook him at the start, it would swap and he would have that chance. So I knew that it would be a long race, a hard race, and I thought we'd have a good one. But to be out already at the first corner when it was avoidable…"

Will you trust him anymore?
LH: "Well, when you're out there you have to trust the people to think with their heads and don't do things deliberately.

"I don't really know how to approach the next race, but all I know is that I've got to push, I've got a long way to come back from it. What was great this weekend is the support that I've had from the fans; on the parade lap, when we went round, so many British flags were here, caps and team tops. I'm gutted that I wasn't able to get a result for them this weekend."

In the meeting, you said he said he apologized?
LH: "No, no he didn't. He said it was my fault and that he could have avoided it. But he didn't want to."

Toto said there might have to be team orders from now on. Can you enlighten us in any way?
LH: "I can't imagine what the team would do now because I came into this weekend with a really positive mind thought and I was really excited. I've got eight races and we're close, there's only 11 points in it. It's going to be good for all of us, good racing and I thought that this would be a track as well that would be more exciting.

"And it was interesting because we had that meeting on the Thursday and Nico literally expressed how angry he was. And I was thinking, ‘It's been three weeks, you've been lingering?' He literally sat there and said how angry he was at Toto and Paddy, but I thought we should be good. After that and then this result, it's interesting."

He said ‘I learnt something' and it may have been a reaction from that last race? And as it's happened, it's come out. Has your opinion changed? That it was pre-meditated?
LH: "I'm not going to be into that. It's damaging for me, this weekend. I don't know how I'm going to get back those 30 points but what I do know is that I've got a great group of people behind me. The guys on my side of the garage have had quite a lot of bad races but I know that with their support, and the fans, we've got a great car, a great team, we should be finishing one-two. And I really hope that I can bring them some good points and good results moving forwards. Whatever the case, I will always put the team first and I won't take anything into my own hands."

If you go into the chicane at Monza, wheel-to-wheel, are you going to trust him?
LH: "I'll just make sure we're not wheel-to-wheel."