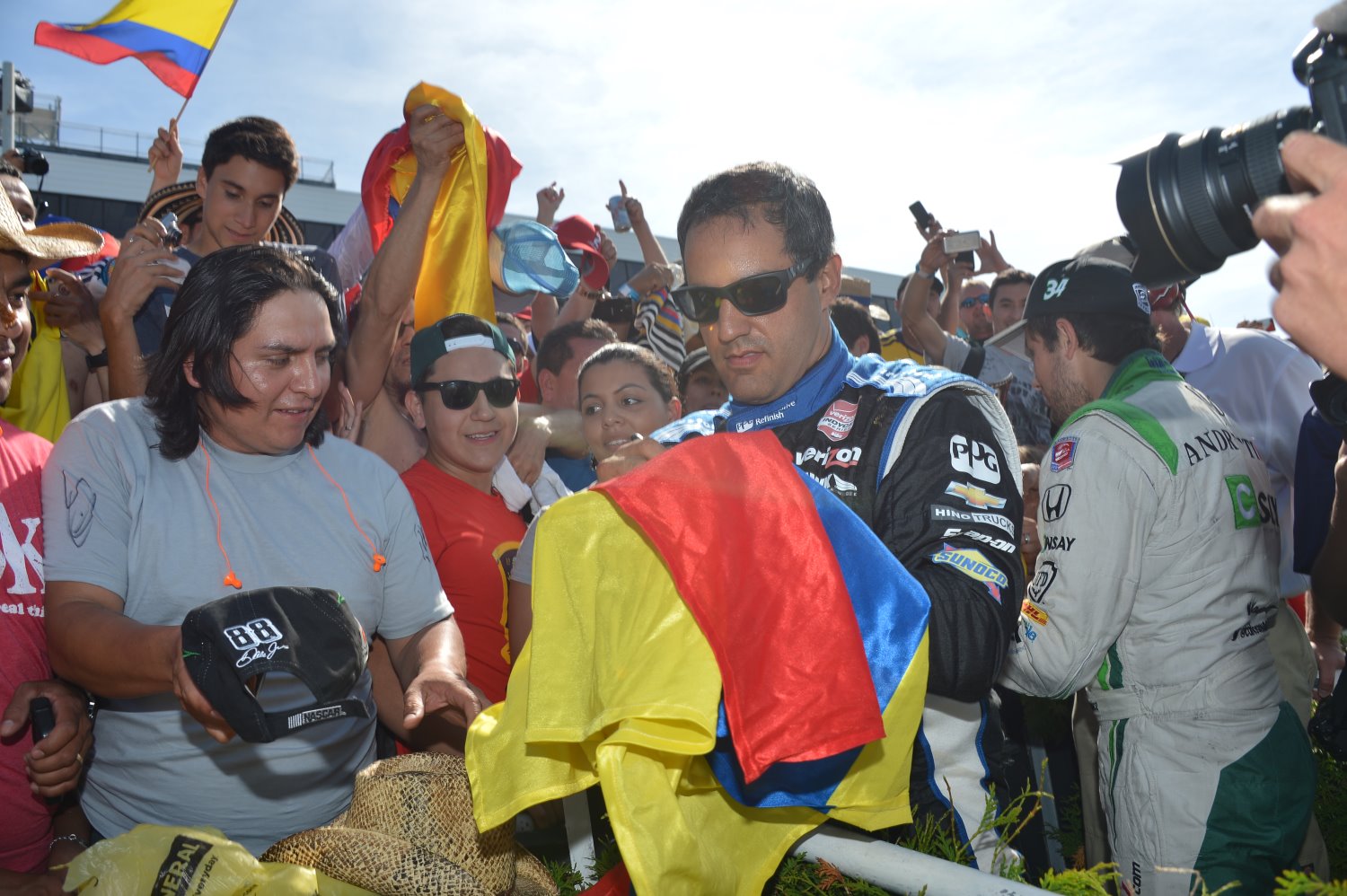 Quite a few years and even more gray hairs ago, Juan Pablo Montoya came to the Milwaukee Mile and made racing history.

It was 2000. He had won the championship in the CART Indy-car series as a rookie the season before, and he was fresh off dominating the Indianapolis 500 when on a chilly Monday morning in June he gave Toyota its first victory at one of the highest levels of American racing.

Three years later, the Japanese giant would win the Indianapolis 500 and pile up open-wheel wins and championships before putting all its efforts into NASCAR.

"It was pretty special," said Montoya, whose memory of further details has been wiped out by some 150,000 racing miles since.

Now Montoya has come around after six years in Formula One and seven in stock cars, a reborn Indy-car driver trying to win a title in his first season back.

It turns out the Milwaukee Mile could play a key role in that, too.

The ABC Supply Wisconsin 250 on Sunday starts a three-weekend, three-race push to the championship that runs through this short oval, a road course in Sonoma, Calif., and a superspeedway in Fontana, Calif.

From fifth place, Montoya has 98 points to go to pass Will Power, the Verizon IndyCar Series leader and a teammate. To do so, Montoya needs three good weekends and a lot of help.

"I agree 100% with you," Montoya said in a telephone interview before coming to Milwaukee. "You never know, but coming into this weekend, honestly I feel really strong about it, I have a really good feeling about the weekend.

"If we run anywhere like we were at the test (in June) and we were in Iowa (another short oval), we run a smart race there's a really good chance we can win the race.

With Power on top and Castroneves second, Team Penske has three drivers in the top five heading into qualifying Saturday and the race at 2:45 p.m. Sunday.

Montoya, 38, isn't the same driver he was when he won one-quarter of his starts in the old CART series.

Driving lightweight, high-powered cars in the cutthroat world of F1 and then transitioning to heavy stockers on big ovals — winning in both — has broadened his knowledge base for racing, and a wife and three children have brought wisdom.

"With the time you become wiser and you understand when to take risks and when not," Montoya said. "You get a little more cautious. But one thing is being smart about it, the other thing is being overcautious.

"I started the year being over-cautious, and as the year has been going on I feel like I've been getting a little more cocky with the car, a little more comfortable pushing the car a little harder, getting more out of the car."

In his 11th race back, Montoya scored his first victory on the big triangular Pocono Raceway in Pennsylvania.

"I'm surprised I'm even in a position to win a championship…because of the way we started the season and the way things started out, I knew it was going to be a slow start and it was going to take time," Montoya said. "We've come an awful long way since then."

Montoya spent a day testing at the Mile in June, and that was an eye-opener.

He had been to the track a couple of times in a Sprint Cup car, whose handling characteristics have almost nothing in common with what he drives today, and the last time Montoya raced at the Mile, the Indy-car rules package was considerably different.

"When I drove back in the day, we had the small wings," he recalled. "We were braking and downshifting, and now all of a sudden you're seeing how close to wide open you can run.

"The wow factor came in."

So this weekend is like a different lifetime for Montoya compared with when he won at the Mile. He's won seven Formula One races and three in NASCAR in two divisions; the cars and even the series are different; he's with Penske, not his two-time home of Chip Ganassi Racing; and Toyota's long gone.

Only his expectations are the same.