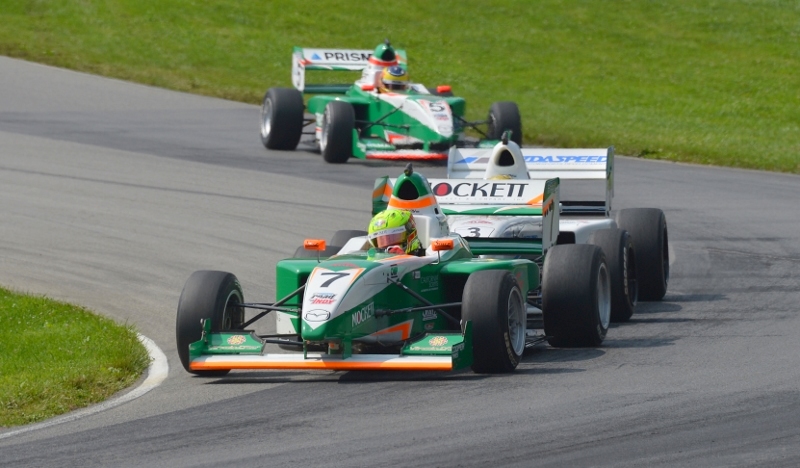 The weekend began well with Pigot showing good speed during both the Thursday test day and the first official practice session on Friday morning. He was fast, too, in the early part of the lone qualifying session. Unfortunately, his team's strategy failed to play out when an on-track incident caused the session to be red-flagged and Pigot was unable to put together a clean lap in the final few minutes. He had to be content with an unrepresentative eighth on the grid for Saturday's first race.

A good start saw Pigot gain two places at the first corner. He then took advantage of a miscue by Garett Grist and a technical glitch for Juncos Racing teammate Kyle Kaiser to move the #7 Doug Mockett & Company/Rising Star Racing/Vitamin-DPro App/California Scents/OMP car into fourth place, where he remained to the end, finishing just over one second behind the race winner.

"The first race went pretty well considering where we started," related Pigot. "We were looking really good in qualifying, fastest for most of the session, but when I came in for new tires I had a lot of traffic and then a red flag ended the session early so we didn't get a chance to put a lap in. I just concentrated on keeping my nose clean and making up as many spots as I could."

Pigot started fifth on the grid for Race Two on Sunday morning, based upon each driver's second fastest laps from qualifying, and once more made a good start to gain one position at the first corner. He maintained that place for three laps before running wide at the exit of the ultra-fast Turn One. The incident cost him three places. Undeterred, Pigot overtook Kaiser and then latched onto the back of Rising Star Racing teammate Neil Alberico before being obliged to settle for a sixth-place finish.

"Race two was a little disappointing," he said. "I was up to fourth on the start but made a mistake in Turn One and went off. It's so hard to pass at Mid-Ohio I was only able to make it back to sixth. Overall we didn't lose many points so that was nice. I'm excited to go to Milwaukee and fight for another win.

"I have to thank everyone at Juncos Racing for their hard work," continued Pigot who will return to action at the historic Milwaukee Mile oval on August 16 for Round 12 of the Pro Mazda Championship Presented by Cooper Tires. "Also my supporters Doug Mockett & Company, Vitamin-DPro App, Rising Star Racing, California Scents, The Stutz, OMP America and RaceLite Protection. We extended our points lead which we hope to build on at Mid-Ohio in August."