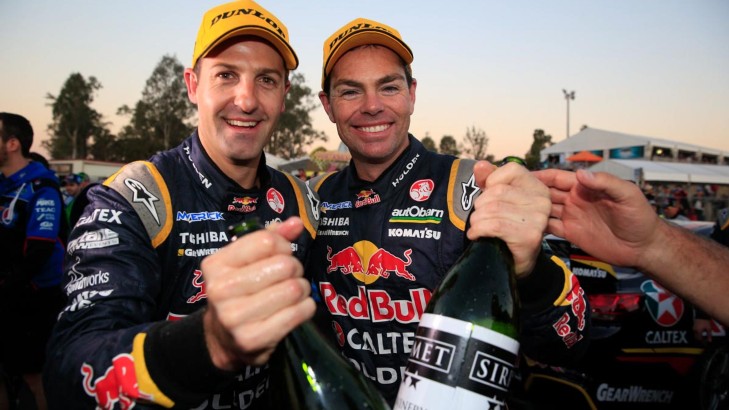 Sheer devastation for Nissan's Michael Caruso has inadvertently helped Jamie Whincup's surge further towards the V8 Supercars Championship lead after a race he never looked like winning, but somehow did.

Caruso was shattered by a late race penalty for punching into the side of Scott McLaughlin's Volvo while making a lunge for the lead, forcing a drive-through penalty that lost a race he looked almost certain to win. He also took out McLaughlin who never recovered from the contact.

While the Nissan heartbreak of going so close to victory prevented what should have been victory for all five manufacturers in 2014, it ended with the Red Bull Racing Australia team celebrating its second straight 1-2 result on the day.

Caruso drove his Norton Hornets Altima to the limit in what was a battle between, believe it or not, Nissan and Volvo from the start. Caruso had started alongside the Valvoline Racing GRM S60 and pushed McLaughlin in the mid part of the race before taking a lunge that spun his rival.

It seemed virtually certain that at some point Caruso was going to pass McLaughlin; and that both had the measure of Whincup and Lowndes.

To his credit, the moment that McLaughlin came back into the pits post-race Caruso went straight to his rival's garage and apologized to the young Kiwi.

"I had a chat with Scotty afterwards and apologized to him. Obviously, the incident was not intentional," said Caruso, one of the most popular drivers in the paddock.

"I don't blame the guy for having a go, just one of those things," said McLaughlin.

"I am pissed off but at the end of the day everyone makes mistakes. You move on, we have got tomorrow and you enjoy it. I am good mates with Michael, it makes it a bit awkward, but we are grown men having a go out there."

The back story of the day though was Whincup further punching into the lead of Mark Winterbottom, cutting the deficit from 96 points to 48 in the day.

Winterbottom's again made the most of poor Saturday qualifying to hang in but there was little he could do to catch the Red Bulls. He will now need to rely on his strong Sunday form in 2014 continuing tomorrow.

A reserved Whincup would realize the significance of being in the rear view mirror of Winterbottom, as much as he did not admit it.

"We feel confident that we've made some gains from the start of the year which is what it's all about. I don't like to talk Championship, not this early," Whincup said.

"This part of the year is about going hard and winning as many races as you can. I feel like we are in contention but we will see where we are after Gold Coast."

Whincup and Lowndes had it all their own way in the opening race, reminiscent of a battle earlier this year in Tasmanian that didn't end so well for Lowndes.

Back in March at Symmons Plains an aggressive Whincup's passing attempt ended with Lowndes' Holden Commodore VF off the road and the two drivers meeting in the team transporter post-race for a heated discussion including team boss Roland Dane.

This time Whincup took the lead on lap 22 when Lowndes bobbled coming on to the Queensland Raceway's main straight, Lowndes reasserted himself at turn two and then Whincup out-braked him into turn three and bolted to a 4.5 sec win.

"There's no team orders, we raced hard and fair and I hope people enjoyed it," the defending Champion said. "He had an issue coming on to the straight, then I run a bit deep into one, he got me back and then I had a lunge back into three …. happy days.

"It was hard and fair, Tassie is well and truly behind us. We want to race."

Lowndes has sprung up the Championship table from sixth to third, overtaking Fabian Coulthard, with Shane van Gisbergen ahead of James Courtney and McLaughlin.

The final race of the Coates Hire Ipswich 400 runs tomorrow, with qualifying at 12.55pm AEST to determine the starting grid for the 200km race.