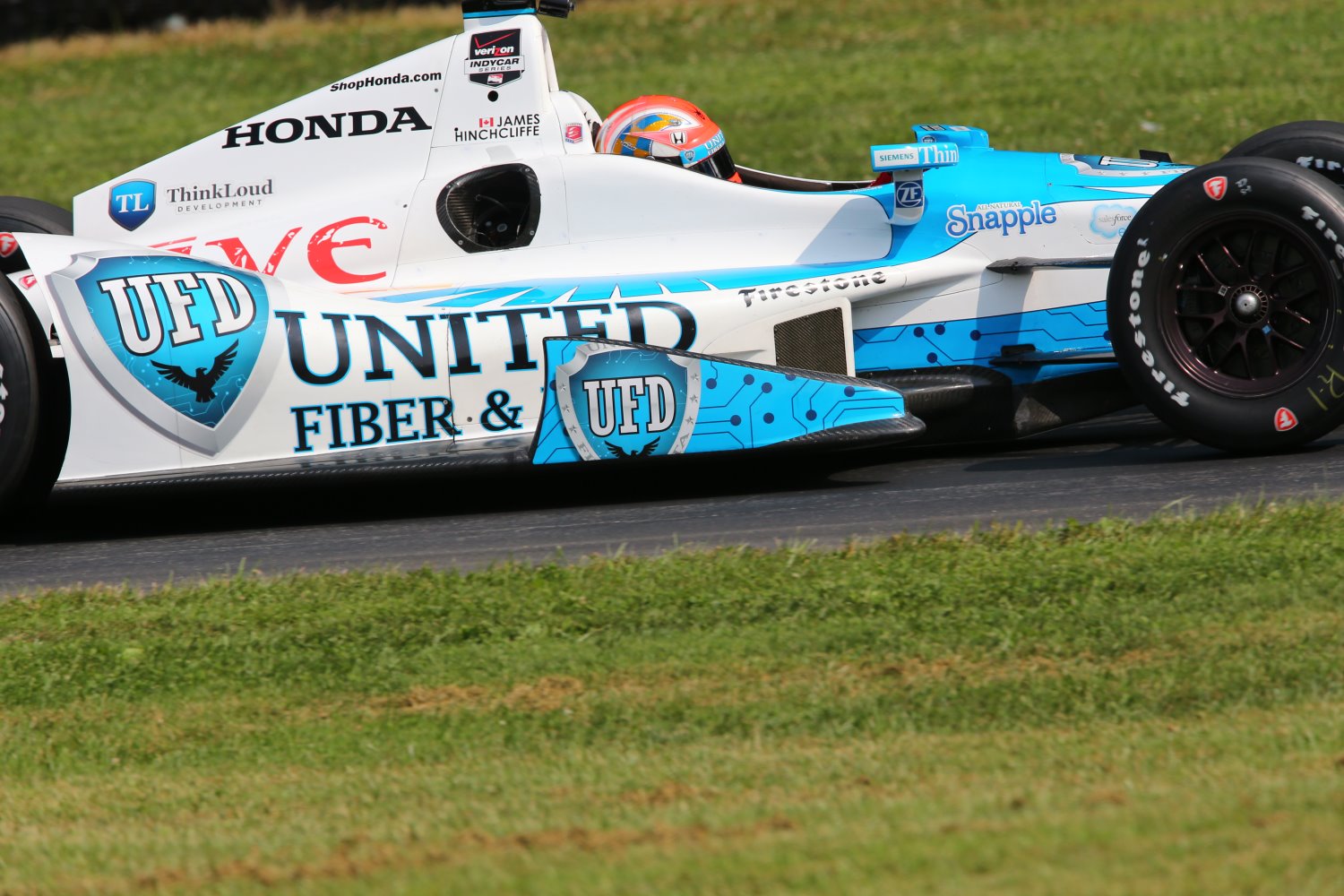 JAMES HINCHCLIFFE (No. 27 United Fiber & Data Honda): "We didn't get enough laps on the tires on that last set we ran. It's taking a couple laps for the tires to come up to temperature and they're a bit slippery until then, so I don't think 12th (in the second session) is representative of where the car really is. I think there's a chunk of speed in the United Fiber & Data Honda and we saw some of it this morning. Luckily we have another practice session in the morning to know exactly where we are before qualifying."

MARCO ANDRETTI (No. 25 Snapple Honda): "Practice 1 was fine for us today. We didn't change anything (between sessions), but went so loose in Practice 2 and we didn't get a lap on new tires. The traffic made it tough, cars kept backing up before the line and there were a couple of flags. I don't think the car is bad, we just need more of a chance to get out there and run."

RYAN HUNTER-REAY (No. 28 DHL Honda): "It was a good start to the day. We were quickest in the morning with the DHL car. Because of the stoppages in the second session, we never got moving the way we wanted to. I think the cars are good, but we do need to work at it overnight and go for pole tomorrow. Coming down to the final race and a championship on the line, we need to win. It's amazing to think that we've won three races and Helio (Castroneves) has won one, but he's that far out in the lead in points. But that's the way the points system is right now, we need to win races because we are in the position we are. But it's doable still and we'll keep at it."

CARLOS MUNOZ (No. 34 Cinsay AndrettiTV.com HVM Honda): "Mid-Ohio is kind of a strange track. You have to readjust to the track in every session, and you aren't sure what changes to make because the track is still improving every lap. The first session was similar to this afternoon. We waited for a long time, and the last lap ended up being the fastest time. It's hard to judge where you are after second practice. We have another practice tomorrow, and I think we're going to struggle a bit as we wait for the track to come in. I think the Cinsay car is pretty strong. Now we have to think about tomorrow and see what the weather does. If it rains tonight, the track is going to be completely different again tomorrow."

JOSEF NEWGARDEN (No. 67 Hartman Oil/Sarah Fisher Hartman Racing Honda): "We did some experimenting today and a lot of it didn't work. With this type of schedule you have a little more flexibility to be aggressive with changes and try some different directions and that's what we did today. I think we have a good base to go back to. We had strong test here last week and have a good idea what we want from the car. I feel like we'll be good to go tomorrow, we just had a tough day today with some of the experiments we were doing."

TAKUMA SATO (No. 14 ABC Supply A.J. Foyt Racing Honda): "Today the track condition was very slippery, low grip, felt a little greasy compared to the test day last week, which, by the way, we had a very productive test and we learned a lot and that showed in the result today. The ABC car is working really well under the tricky conditions. Tomorrow will be tricky weather-wise but by Sunday for sure, the whole track will grip up and it will be a different scenario. We have been struggling a little bit on the lower grip condition on the road courses but now we are in a very good position and we're very pleased. We're working to continue the speed for tomorrow."

GRAHAM RAHAL (No. 15 National Guard Honda): "After the morning session we tried a couple of different things and I think we lost a little bit of our competitiveness. We need to take a step back. I think we know what direction we need to head now, but we only have one practice session left until it counts in qualifying. Some guys ran new tires at the end of the session and we didn't so we're probably a top-10 car, but we need to be ahead of that. The car is just sliding around too much. If I get the rear of the car comfortable then the front of the car is poor. Then if I get the front comfortable to where it really grips (the track), then the rear is poor. The question is how to get them both to work together. We have some work to do overnight."

RYAN BRISCOE (No. 8 NTT DATA Chip Ganassi Racing Chevrolet): "We had a really good first day of practice here at Mid-Ohio. The car felt really good in both sessions, but we were able to find some more speed in the second session. I love running at this track, and I think it's a great start to the weekend for the No. 8 NTT DATA Chevrolet to finish in the top 10 in both sessions. We'll work on a few more things tomorrow in the last practice and then get ready for qualifying tomorrow afternoon."

CHARLIE KIMBALL (No. 83 NovoLog FlexPen Chevrolet): "It was a good solid day of practice as far as changes went. We tried a lot of different things on the car going from the first to the second practice. With the track heating up and the support series rubber going down, the conditions and the driveability of the car changed quite a bit this afternoon. We made a few changes that really didn't work, but now we know which way we need to go to fix those for tomorrow morning's practice and qualifying. I have a lot of confidence that the No. 83 NovoLog FlexPen Chevrolet will be in better shape for the first practice and ready to go for qualifying."

SCOTT DIXON (No. 9 Target Chip Ganassi Racing Chevrolet): "We were really good in testing here last week and that speed continued over today, so we were happy. The Target team has had a lot of success here recently, and actually through the years with I think around 9 or 10 wins overall. We're just focused on doing what we need to do here and trying to close out the season with some wins."

TONY KANAAN (No. 10 Glad Chevrolet): "Obviously, we have a lot of good data from this track. It's no secret that we're kind of struggling a little bit this year. Every track we've been to this year hasn't been the same as past results. We're trying to be extremely realistic. We came and tested here last week. I think the Glad car is pretty good. This morning we only did five laps because of the requirement to keep the set of tires we have. We don't have enough tires this weekend from the allotment to run every session. It is what it is, but we'll make the best of it. I think we're strong. Obviously Toronto was a good weekend for us. We're still looking to bring the first win to Target Chip Ganassi Racing this season. Coming to the track that they've won the last five races, it's always a positive sign."

JUSTIN WILSON (No. 19 Dale Coyne Racing Honda): "It went okay today. We didn't end up quickest, but we ended up fourth this afternoon. This morning we were quick when we stopped running, but we stopped a little early. I think it went okay. We still have a little bit more to find. Everything seems to be a bit of a trade-off. You can improve one corner and make another corner worse, and then you improve that corner and then you make another one worse. So it's about trying to find the right combination that's going to help everywhere. Generally I'm pretty pleased but it's going to be tight tomorrow. I hope we're going to be up there fighting for the pole. That's my goal but it's going to be very competitive. All it takes is one mistake or one piece of bad luck and you don't make it through the first round of qualifying."

MIKE CONWAY (No. 20 Fuzzy's Vodka/Ed Carpenter Racing Chevrolet): "It's always a little strange here at Mid-Ohio. We were fast at the test last week here. But then that chassis setup wouldn't work this morning or this afternoon. I'm not sure if it is the rubber from the different series that causes it. We found a little better direction with the car later in the afternoon session. But usually you get quicker in the afternoon, but that is not the case today. The track surface felt slippery. You are playing a game with the track to find the best setup for the car. It's very strange and frustrating, to be honest. I hope the direction we found this afternoon will translate on Saturday for us."