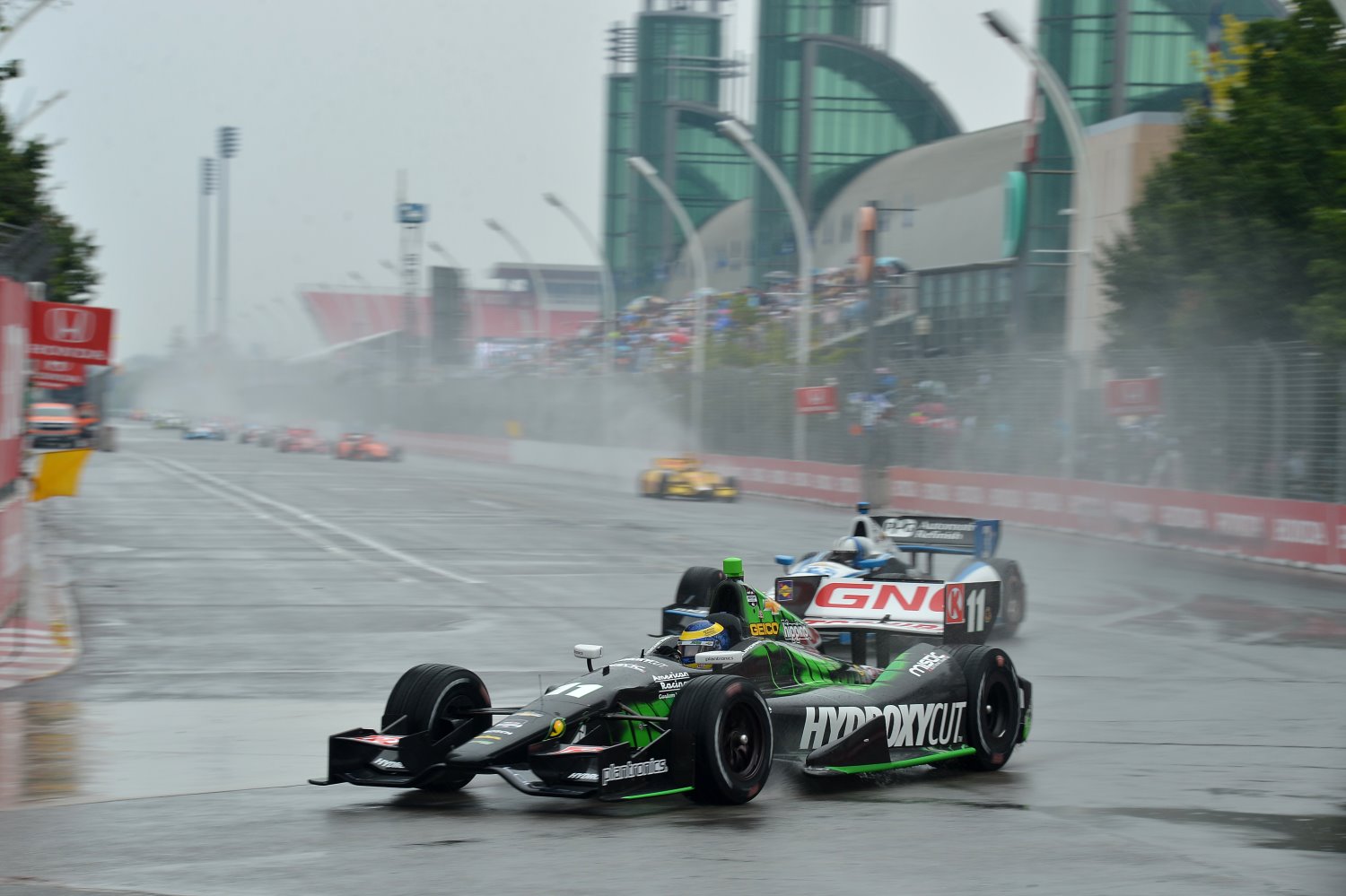 Sebastien Bourdais, driving the No. 11 Hydroxycut KVSH Racing Chevrolet, earned the Verizon P1 Award for Race 1. It was his first pole since Sept. 2, 2007, at Assen, Netherlands. The Race 2 starting lineup will be determined by entrant points heading into the event weekend, which gives the Verizon P1 Award to Helio Castroneves. The driver of the No. 3 PPG Team Penske car takes a nine-point lead (he does not receive the bonus point for the pole) over teammate Will Power into Round 13 of the 18-race season.

"Obviously, we all wanted to get the race in today, but this was the correct call," said Castroneves, who qualified third for Race 1. "We really tried to start the race but it was clear that we were going to wreck a lot of cars. The PPG Chevy is very fast so whenever we start the race we will be fine."

The postponement creates the first same-day doubleheader since June 28, 1981, at the 1.522-mile Atlanta Motor Speedway when Rick Mears swept the Kraco Twin 125s. A Verizon IndyCar Series twinbill of shortened race distances was contested at Texas Motor Speedway on June 11, 2011. Dario Franchitti and Power were the winners of the 114-lap Firestone Twin 275.

After a 2-hour, 30-minute delay from the scheduled start, INDYCAR officials and the promoter group made the decision to wait for a more favorable weather forecast July 20.

It's the first Verizon IndyCar Series race postponed because of inclement weather since Sao Paulo in 2011, when 15 laps were run. The remaining laps were completed the next day. The 2010 season opener in St. Petersburg, Fla., was postponed before getting the green flag to the next day. Races at Barber Motorsports Park, Houston and Iowa Speedway have been impacted by rain this season.

Race Control declared a wet start 60 minutes before the command to start engines because of persistent light rain that created puddling. The standing start was scrapped in favor of a single-file rolling start.

The 23-car field made several warm-up laps before Verizon IndyCar Series officials declared a red flag and cars returned to pit lane because of poor visibility and slippery conditions.

"They can race in the rain, but it's once they get up to speed and the spray. You can't see anything and it would be mayhem," said team owner Michael Andretti, who won seven times at Toronto.

GRAHAM RAHAL (No. 15 National Guard Honda): "The conditions were difficult today. You just couldn't see. And it's not a matter of racing because all of us want to. The problem is that it's got to be safe and when the visibility is like it was, there's just nothing you can do, you could hurt somebody. They made the right call. It's unfortunate for the fans, but it is what it is. This is a great fan base and they're troopers for staying here. I feel terrible for them but there weren't many good options."

LUCA FILIPPI (No. 16 Rahal Letterman Lanigan Racing Honda): "The conditions were not ideal that's for sure. It's a bit strange that the only place that is not bumpy is the back straight and there is new asphalt, but it doesn't drain the rain at all. So with a lot of speed and the downforce of this car we had so much spray that even running seventh I couldn't see a thing, so I think that in the back it was even more dangerous. You reach a high speed and after that there is a slow hairpin. It's a bit of a shame because with a better surface you can easily race with rain like that. For our side it was a good day. In qualifying we did everything we could so we will just wait and see what happens."

HELIO CASTRONEVES (No. 3 PPG Team Penske Chevrolet): "Obviously we all wanted to get the race in today, but this was the correct call. We really tried to start the race, but it was clear that we were going to wreck a lot of cars. The PPG Chevy is very fast so whenever we start the race we will be fine."

JUAN MONTOYA (No. 2 Hitachi Team Penske Chevrolet): "I really hate it for the fans. You never want to feel like you cheated them, but you can't control the weather. It was the right call. We were getting ready to have an expensive day for everyone with the cars we were going to wreck. The Hawk Chevrolet had a bit of an electrical issue, but we are good to go now. Looking forward to getting the race started."

CARLOS MUNOZ (No. 34 Cinsay AndrettiTV.com HVM Honda): "Obviously the race was canceled, but before that, I think we didn't get the qualifying we wanted. Again, everyone was really close, and our group was really competitive."

JAMES HINCHCLIFFE (No. 27 United Fiber & Data Honda): "I'm gutted. I just feel so bad for all the fans here in Toronto. It's the worst case scenario – the rain started right as the race was supposed to start, the conditions were just so bad. Just gutted for these guys. I really hope we can get back tomorrow and Mother Nature cooperates a bit more and we can put on a show. These fans have been great all week and they definitely deserve it."

RYAN HUNTER-REAY (No. 28 DHL Honda): "The conditions were tough for sure, I can't speak for the drivers in the back on how visibility was but it was borderline – marginal even – for us. It's a shame we didn't get the race off, especially considering a couple of championship rivals ended up in pit lane just before we were going to go green. It would have been nice to capitalize on that opportunity, but I understand the call for safety. Big thanks to all the fans that came out today and stuck with us, we look forward to putting on a good race for them tomorrow."

MIKE CONWAY (No. 20 Fuzzy's Vodka/Ed Carpenter Racing Chevrolet): "On the pace laps, visibility was pretty bad. That is main reason we are not out there. And we really weren't up to speed yet. Down the back straight you could hardly see the car in front of you. And that was at the speed we were going then. It was going to be difficult to race like that. However, we could have kept driving around the track and I think we could have dried the track out a little better. Maybe if they would have kept us out there it would have dried out quicker. I know it's a difficult decision. For sure, it was not really safe to start the race at that point. I think they have to try to run two races on Sunday but it is tough on the teams. I'll be up for two races on Sunday."

07/19/14 OK, it is official. IndyCar will run two 75-lap races on Sunday. The first will be a rolling start beginning at 10:30 in the morning and the 2nd race will be a standing start beginning at 4:15 PM. The first race grid will be based on today's qualifying. Tomorrow's 2nd race grid will set by entrant points as they were before this weekend started. Both races will be broadcast by NBC Sports Network. Fans who had Saturday-only tickets can exchange them for Sunday tickets. Mark C. reporting from Toronto.

07/19/14 As predicted by AR1.com, IndyCar just announced that they will try and run two races tomorrow. The first will start around 10:00 AM in the morning and the 2nd on the time originally scheduled (3:45). Stay tuned for an official announcement on the details.

07/19/14 IndyCar has called off the first leg of the Honda Grand Prix of Toronto doubleheader due to a steady rain that made visibility down the backstraight so bad it was not safe to race. The rain tires were throwing rain mist up into the air and it would just hang there making it impossible for the drivers to see beyond the nose of their car. Stay tuned for what IndyCar has planned for tomorrow.

Might we see them try to run two short races tomorrow like they used to do back in the 60's? We hear it's being discussed, with the first race starting around noon and the 2nd race around 3:45.

The forecast for tomorrow is not much better.