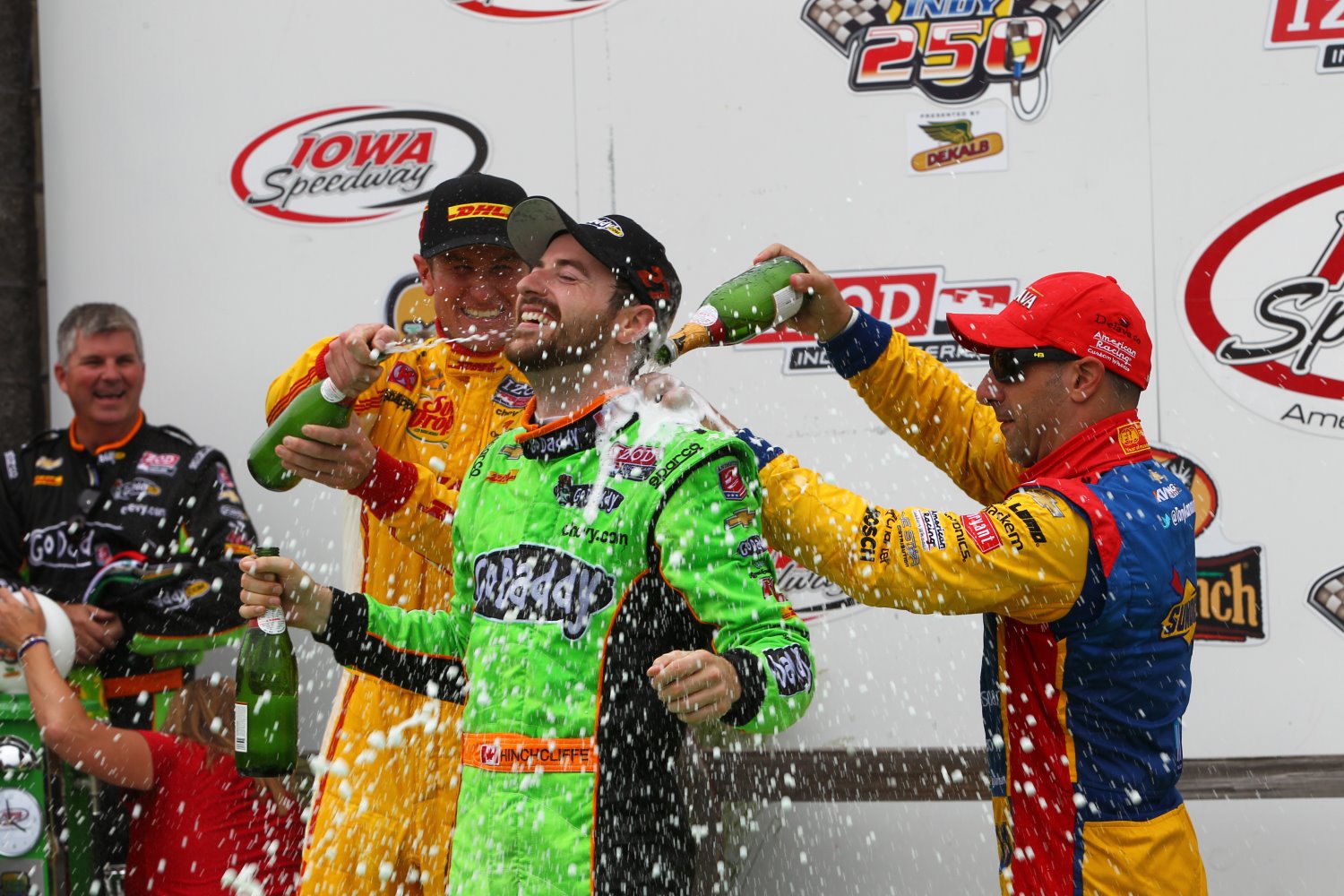 Tied at the top
Helio Castroneves took advantage of a double points weekend at Pocono to tie Will Power at the top of the Verizon IndyCar Series standings with a second-place finish. Power leads Castroneves by virtue of the wins tiebreaker, but Simon Pagenaud (44 points back), Juan Pablo Montoya (55 points) and Ryan Hunter-Reay (58 points back) are not too far behind.

Montoya looks to give Team Penske its first Iowa win
The hottest driver in the Verizon IndyCar Series races for Team Penske but it isn't Will Power or Helio Castroneves, who are tied atop the Verizon IndyCar Series point standings. Juan Pablo Montoya has scored the most points in the series over the last six races and will look to give the team its first win at Iowa Speedway. Montoya raced in the first race at Iowa – an ARCA race in 2006. Can he break Penske's winless streak at the track?

Andretti at home in Iowa
Marco Andretti may hail from Pennsylvania, but he is at home at Iowa Speedway. Andretti is aiming for his first win of 2014 but has four podium finishes in seven Iowa Speedway starts. Andretti last won a Verizon IndyCar Series race at Iowa in 2011. Can he add another win this year?

Kanaan, Dixon try to recapture success on series' shortest track
Target Chip Ganassi Racing's Scott Dixon and Tony Kanaan return to Iowa Speedway hoping to return to their winning ways. Kanaan won the Iowa Corn Indy 250 in 2010 when he drove for Andretti Green Racing. Now he drives Target Chip Ganassi Racing's No. 10 car, which won the race in 2008 with Dan Wheldon and in 2009 with Dario Franchitti. Dixon has six top-10 finishes at Iowa, but has never finished better than third. Can either win another gas pump trophy and give the team a third Iowa win?

Iowa racers make name as part of top teams
Even though there are no native Iowans behind the wheel of any Verizon IndyCar Series car, several native Hawkeyes will play key roles in this weekend's race as over-the-wall crew members: Travis Law of Maquoketa is the chief mechanic/outside front tire changer for Helio Castroneves' car; Jeremy Baker from Clear Lake is the inside rear tire changer for Will Power; Brett Snyder from Muscatine is the fueler for Sebastian Saavedra; Doug Bradley from Esterville is the inside rear tire changer for Ryan Hunter-Reay and Rob Channel of Altoona is the airjack operator for Jack Hawksworth.

Generation Next
James Hinchcliffe, Simon Pagenaud and Charlie Kimball all scored their first win in 2013, finished top 10 in the championship standings and established themselves as the next stars of the sport. The trio of young stars is joined by a talented rookie class that has already produced a race winner in Carlos Huertas. Will another young star be a threat to win this weekend?