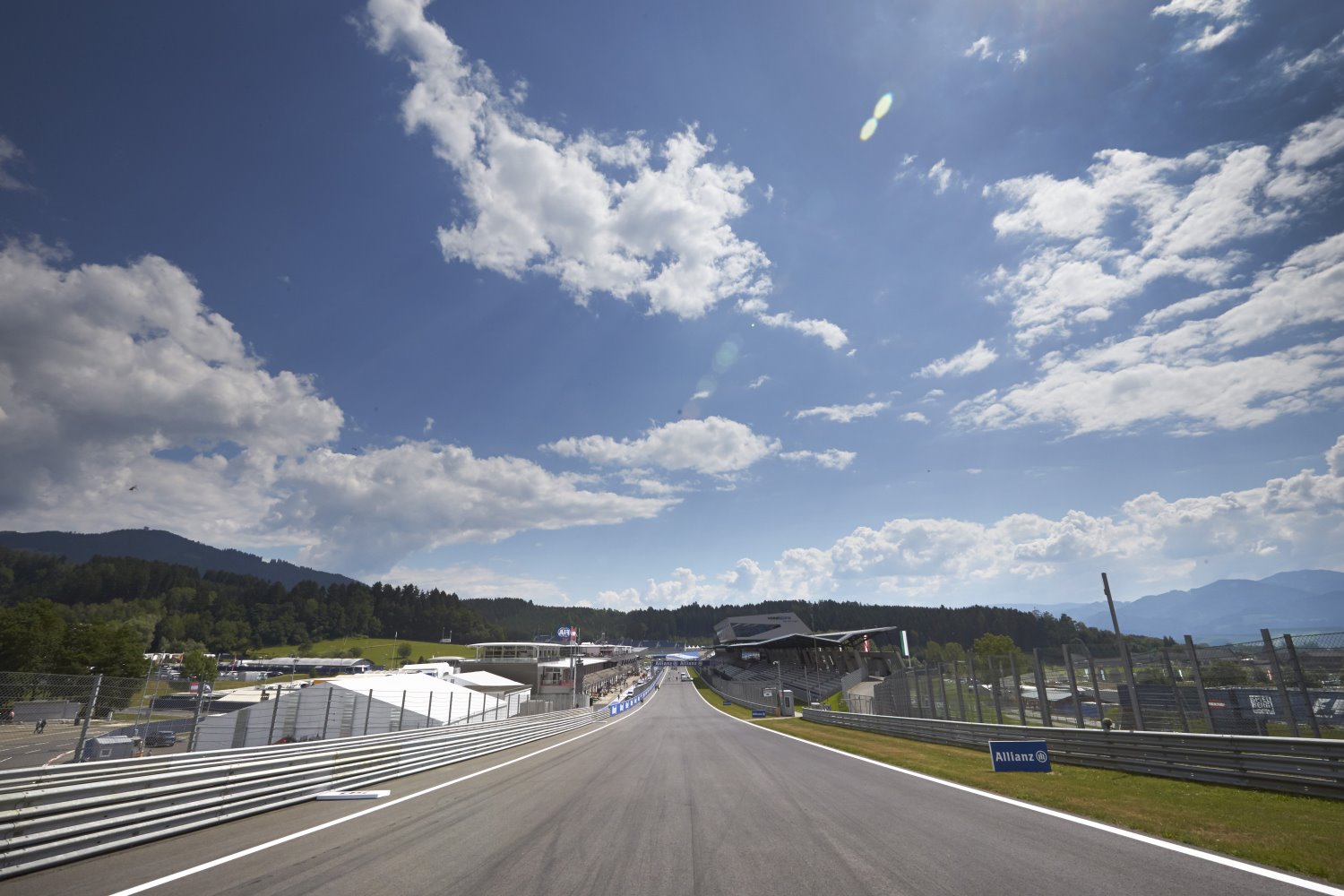 After the A1-Ring last held a grand prix in 2003, Red Bull's Dietrich Mateschitz bought the Spielberg venue and spent dozens of millions refurbishing it.

Some traffic chaos aside, Austria's return to the schedule has been warmly welcomed.

"People seem to like it here, which is very nice to see," said the ultra low-profile Mateschitz, who is making a rare paddock appearance this weekend.

Even Niki Lauda, of Red Bull's arch rivals Mercedes, admitted on Saturday he is happy to see F1 back in his native country.

So good that even F1's chief executive is impressed. "It was important to have this race back," Ecclestone is quoted by the German daily Bild.

"It's good for the region and for formula one."

The newspaper said the Red Bull Ring has a new contract with F1 that runs until 2020 — precisely the same length of Mateschitz's commitment to the sport with the reigning world champion team Red Bull Racing.

But Ecclestone said: "As long as Dietrich and I want it, the race will be here.

"We plan our calendar for the long term," the Briton is quoted by APA news agency.

"We need stability with regards to venues and dates," Ecclestone explained. "In the next five years, the calendar will be relatively stable."

It is not known what annual fee Mateschitz is paying to Ecclestone, but the 83-year-old admitted it is less than some of the newer venues on the calendar like Abu Dhabi or Sochi.

"There is a difference (between them) and the traditional races," he said.

Ecclestone said he is happy with the rejuvenation work at the Red Bull Ring. "The old track was not nearly as good as it is now," he said.

"It's amazing what Dietrich has done here."

Ecclestone also said Austria is an important gateway for F1 to nearby "Slovenia and Croatia".

Mateschitz plays down 'Red Bull engine' claims
(GMM) Dietrich Mateschitz has played down claims he is set to approve a bespoke engine project to power his formula one team Red Bull from 2016.

The rumors have been fuelled by none other than the billionaire's F1 right-hand-man Dr Helmut Marko, who said links with renowned Austrian companies like Pankl and AVL mean: "You should never say no.

"We are looking at all alternatives."

Mateschitz, rarely seen in the paddock, is attending this weekend's Austrian grand prix at his very own Red Bull Ring.

He said he is coping with Red Bull's struggle in 2014, following four consecutive years of title dominance.

"This is sport," Mateschitz is quoted by the Austrian press. "During the past four and a half years, we have won almost everything.

"But it can't be that way forever. And we know why we are behind," he added.

The team is obviously keen to match the field-leading Mercedes in a straight line, but obviously unable to switch to the V6s supplied by its arch-rivals.

Mateschitz, however, played down the reports of a bespoke 'Red Bull' engine.

"We are not a car manufacturer," he said. "Our primary expertise is not the construction of engines."

The 'Red Bull engine' rumor might therefore be just a stark wake-up call for Renault.

"Red Bull has high standards," agreed the French marque's engine boss Rob White. "So we understand the reasons for the statements of Helmut Marko and other team members," he told motorline.cc.

"We want to satisfy Marko and the others so it is important for us to improve. But I don't see any conflict between Renault and Red Bull," White added.

Rosberg opposed to 'extreme' F1 proposals
(GMM) Nico Rosberg is not sure what all the fuss is about.

This weekend in Austria, a palpable air of soul-searching has been evident in the paddock, as F1 muses the effect of the current 'show' on dwindling television audiences and nervous sponsors.

According to some, the sport is leaping from kneejerk reaction to kneejerk reaction, with 'megaphone' and twin exhausts being tested to turn up the volume, and titanium plates mounted underneath the cars to light up fake sparks.

Championship leader Rosberg said: "We must remain open and take the concerns and suggestions of the fans seriously.

"Of course it would be nice if we had a little more noise," the Mercedes driver is quoted by Speed Week, "but at the moment I don't see any particular area that needs to be improved."

When asked about the idea of standing restarts after safety car periods, which has reportedly been approved by the F1 Commission, Rosberg furrowed his brow.

"Is that a proposal?" he asked reporters. "That sounds very extreme.

"I understand that the start is one of the most exciting things for the fans, but I hope that will not happen. In my opinion it's going too far. I like formula one as it is.

"I would not welcome such a drastic change," Rosberg added.

His Mercedes boss, Toto Wolff, agrees with Rosberg, hitting out at the atmosphere of 'talking the sport down' that has characterized much of 2014, and certainly this weekend in Austria.

"We are in a fantastic new venue," he said, "we have had some exciting races — we must talking stop talking ourselves down.

"I cannot imagine any other sport that would start the press conference in the way like we do, just talking about what it not good," said Wolff.

Kvyat hopes 'growth spurt' now over
(GMM) Daniil Kvyat has his fingers crossed his growth spurt is over.

A cursory look at the Russian's formative career, including his GP3 title last year, shows that the then lanky teenager was 175cm tall.

But other, perhaps more up-to-date F1 resources are showing the impressive Kvyat at 180cm — the 5cm difference meaning he is either an average 5 foot 9, or a quite-tall 5 foot 11.

It has raised fears Kvyat might keep growing and hurt his career by no longer fitting easily at the wheel of today's F1 cars.

"Of course yes," he told Speed Week, "I am one of the taller drivers.

"But there were others taller than me in the past, like Mark Webber and Gerhard Berger.

"I have had a growth spurt, but it's over now, I think," Kvyat added.

Marko has also suggested that Kvyat, while clearly the standout surprise among the latest F1 rookies, has been lucky to make his debut in 2014 rather than perhaps a year earlier.

"Daniil Kvyat is a very good driver," he told the Guardian. "But he's young and if he jumped in last year's car he would not have finished a grand prix without being completely exhausted.

"Now he can finish because the demands are so much lower," Marko added.

But although kicking off the season with a peerless double hat-trick of victories, the party came to a stop in Canada when cooling issues struck both W05s.

Team boss Toto Wolff said on Saturday that the problem has not been entirely resolved. And that was before the qualifying session at the Red Bull Ring.

Afterwards, Mercedes is contemplating how Williams – also powered by the superior turbo V6 engine – managed to get both of its cars ahead of Nico Rosberg on the grid.

"We are still in front," championship leader Rosberg, although just third for the race start on Sunday, insists.

"Our advantage is not as big as usual this time, but I think this is a track that suits the Williams well and I also believe they are using a qualifying setup," he told Speed Week.

"I am convinced that we are still the fastest car on the track."

Others think Rosberg is right. "I think tomorrow (Sunday) will be a different story," McLaren's Jenson Button said after qualifying.

"Williams," agreed Nico Hulkenberg, "have been in the top five all weekend. They are fast, but I think it will be different in the race," the Force India driver is quoted by Auto Motor und Sport.

But Mercedes has other issues. Many believe that, after the Monaco 'tantrum' and his retirement in Canada, the pressure is starting to show on Lewis Hamilton.

At the Red Bull Ring, he will start just ninth after spinning on his decisive run in 'Q3'.

"Mistakes happen," team chairman Niki Lauda was quoted on Saturday by APA news agency. "He will not sleep so well tonight.

Team boss Toto Wolff, however, has even greater concerns than that. He is worried that Mercedes' entire approach to 2014, in light of the utter dominance of the W05 car, needs a major rethink.

"We are still world championship leader and our car is still fast," said the Austrian.

"But we have learned a lesson. It is not only teammates racing. There are also others who are strong."

Wolff's comments are a clear reminder to Rosberg and Hamilton that, perhaps because they are so focused on one another, they are now behind several rivals for the race in Austria.

But Mercedes is also taking a close look at the way it is approaching races, Wolff admitted.

"It's a very competitive environment with a lot of pressure," he said. "We need to look at our whole system."

It was the thrilling finale in Brazil, 2008 – where for an instant the Ferrari camp thought its Brazilian driver had pipped Lewis Hamilton for the title – that Massa last started a grand prix from the very front.

"It's the first time since 2008," he confirmed on Saturday, after surprising the world of F1 by leading a Williams one-two at the Red Bull Ring.

"Being the quickest on the track against everybody, it's always the best feeling a driver can have," the emotional Massa, who was ousted by Ferrari at the end of last year, added.

But even before qualifying, when it was clear Williams' car was highly competitive on the Austrian layout, many were placing money only on Massa's teammate Valtteri Bottas.

"Everybody was thinking 'Here is a chance for Williams with Bottas'," said Massa's friend, countryman and former F1 driver Rubens Barrichello, in Austria to commentate for Brazilian TV.

"Then Felipe went out and did it after so long. I'm happy to be here for it," Barrichello told Brazil's Totalrace.

"After so long without being in front, Felipe had to believe in himself," he added.

"To feel wanted by the mechanics, his new team, was a very positive thing for him to be able to work better on the mental side.

"There will always be people wanting to be negative. He has to rely on himself," Barrichello said.

Also not surprised on Saturday was Spaniard Alonso, who for the past four years was paired alongside Massa at Ferrari.

For 2014, Ferrari replaced Massa with Kimi Raikkonen, but so far Alonso has utterly humbled the struggling Finn.

"I always said that Felipe is very, very fast," Alonso said after Massa's Red Bull Ring pole. "Few people believed me, but I still think he was the fastest teammate I've had."