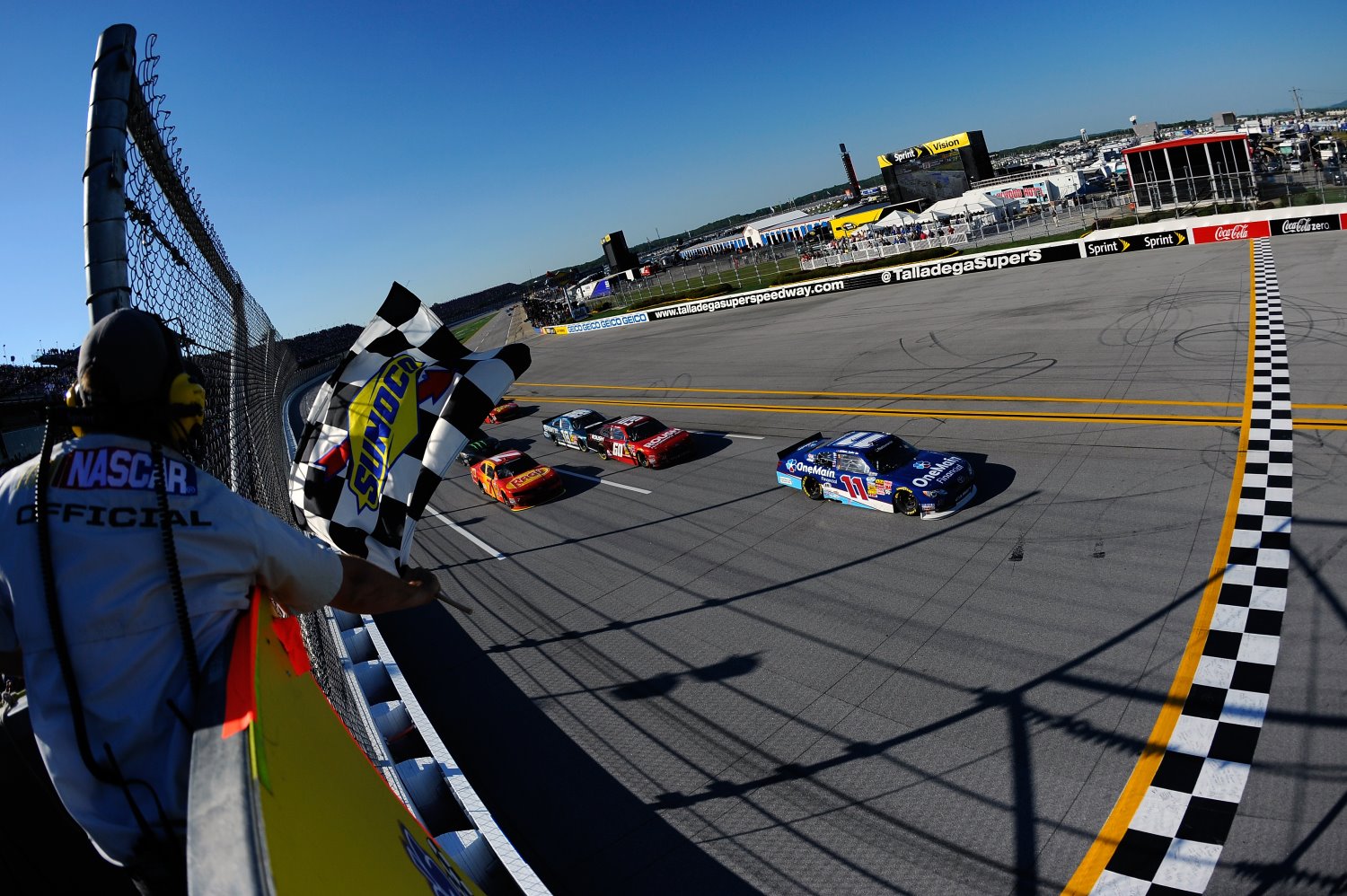 Elliott Sadler stormed to victory Saturday afternoon in the NASCAR Nationwide Series' Aaron's 312, fending off his challengers after a late-race restart at Talladega Superspeedway.

The win was Sadler's 10th in the series, first of the season and first on the 2.66-mile track. He led nine times for 40 laps in the Joe Gibbs Racing No. 11 Toyota and was just 0.125 seconds ahead of runner-up Chris Buescher in a characteristically close-quarters finish that has become the track's trademark.

"We just got on the inside line there and we just had to make some good moves," Sadler said. "The sea kind of opened up for us. This means a lot to me to be able to get these guys to Victory Lane. To do it at Talladega — everybody always asks me about flipping at Talladega. Now we won one at Talladega so it feels a lot better."

Buescher, who crossed under the white flag in a near dead-heat alongside Sadler, was a career-best second place in just his 17th Nationwide start. Regan Smith, David Ragan and Sam Hornish Jr. completed the top five.

A late flurry of crashes whittled the field of contenders, including a wreck involving six cars at the front that triggered a red flag with 112 of the 117 laps complete. Ryan Blaney collided with leader Sadler and smacked the outside wall in Turn 3. Kasey Kahne and Jeremy Clements absorbed the most damage, with rookie Chase Elliott — the Nationwide Series points leader — and Ryan Sieg also involved.

That caution period forced a restart with three laps left, setting up the dramatic finish.

"It was wild, that's for sure," Buescher said. "It was just a matter of holding on to what we had at that point. I didn't want to do anything crazy. Regan Smith pushed me great right there at the end. That's about all you can ask for because I'm still very new to this speedway racing, so to be able to pull off a second is really cool to me."

The first one-third of the race ran relatively cleanly until a four-car wreck brought out the second caution flag to slow the pace. James Buescher spun in Turn 3 off the front bumper of Blaney in the 42nd lap, collecting rookies Darrell Wallace Jr., Ryan Reed and Dylan Kwasniewski in the aftermath. Reed had led the first 29 laps before the first caution period — for debris — flew to jumble the field.

"Anybody that's done superspeedway racing knows you can't do that," Scott said of Bayne's contact with his car's bumper entering the turn. "Stupid move halfway through the race. There's no need for it. … It's unfortunate when you're a victim of stupidity."

Elliott finished 19th — the next-to-last driver on the lead lap — and retained the lead in Nationwide standings by just one point over Sadler.

ELLIOTT SADLER, No. 11 OneMain Financial Toyota Camry, Joe Gibbs Racing
Finishing Position: 1st
How were you able to hold on for the win in the closing laps?
“We just got on the inside line there and we just had to make some good moves. The sea kind of opened up for us. This means a lot to me to be able to get these guys to victory lane. I’m disappointed about last year and I wasn’t able to do it. We have a lot of people here from OneMain Financial today. So glad to win with all those guys here — it means a lot to me. To do it at Talladega — everybody always asks me about flipping at Talladega. Now we won one at Talladega so it feels a lot better."

How important was your spotter in the race?
“He (Brett Griffin) did a good job today and there at the end under the red flag I was playing all these scenarios in my head really on how many races I’ve lost here in the last couple laps — not making the right decision. We just stayed to the bottom and stuck to our guns. David Ragan did a good job pushing us and we were just able to hold those guys off at the end. Brett did a great job and he deserves this. He did a great job getting us all on the front row yesterday, but it means a lot, I’m telling you it means a lot to get this JGR (Joe Gibbs Racing) team to victory lane. They worked their butts off last year and I wasn’t able to reward them. Chris (Gayle, crew chief) is doing a great job and we’re getting a lot of momentum on our side. We let one get away from us at Darlington so to come back here and get one for all our sponsors — SportClips, OneMain Financial, Toyota, everybody that’s a partner at JGR. This makes us feel good."

How wild was the race?
“It was pretty wild the whole race. We dropped back to 12th or 13th and we really had to make something happen and had to switch lanes pretty quick and do some things I’m not used to doing. I was able to block there pretty good at the end. David Ragan gave us a great push there the last two laps and Chris Buescher drove a heck of a race. We were just able to edge them there at the end. I finally get to win a race with a lot of those OneMain Financial folks here — that’s always a lot of extra pressure to do that. My team deserves it. A lot of hard work went into this race car and it was very fast at Daytona. We weren’t able to finish the deal off there so to come to Talladega and make it happen feels special."

How did things unfold during today’s race for you?
“I think with this new rule that we have with the pushing and the bumping track position is so important. So, we felt like with a good qualifying effort yesterday if we could just keep track position the whole day we would be in good shape and Chris (Gayle, crew chief) made some great calls — two tire stops and things like that to keep us up front. We fell back to 13th there in one run there at the very end because some guys did some gas only and we were really worried about making it back up to the front and we were able to do it. I’m going to be honest with you, during that red flag sitting in turn three I had 20 scenarios through my head of how many times I’ve screwed up here in the past with a good race car and not been able to finish it off. Blocking the wrong lane or going at the wrong time or going in the wrong lane. So, I felt like leading the race I had to protect the bottom, felt really comfortable with David Ragan behind me because we all know what kind of drafting race car driver he is and we were just able to make the right blocks at the right time. Brett Griffin did a heck of a job as my spotter telling me what lanes were coming and — I've got such a love hate relationship with this race track. We always run good here, but I always doggone flip or wreck or hit hard or something. So, every autograph session everywhere I go everybody always reminds me of the flip I had down the back straightaway here a couple years ago and damn it maybe they can ask me about winning here. It was good to get that under our hat today with such a fast race car and it means a lot to me."

How much did it weigh on you not get a win for Joe Gibbs Racing last year and how relieved are you to get it today?
“When you come to a new place and you’re running for such a respectable man and person and owner like Joe Gibbs Racing and you’re not able to give back to them and not go to victory lane and not really run for the championship as strong as you want to it weighed on me heavy. Dude, I’m competitive as hell and I don’t want to just ride around. I want to race and race for wins and run upfront and today to be able to go to victory lane and him (Joe Gibbs) call me on the phone was amazing to me. That was a feeling that’s really hard to put into words, but it just feels good. It feels like we’ve put a lot of extra hard work in this winter into the race team and building new cars and I’ve done a lot of extra work as far as myself staying fit and being ready each and every week. And, I’ve got one of the best sponsors — they are so loyal to this sport. They’ve been in racing now over 13 or 14 years and to see the owner and her husband here and they were able to go to victory lane for us for the first time today together, you can’t put that in words. That just feels great as a driver to be able to do that. So, yes it weighed heavy on me last year and it hurts the way we ran last year — I ain’t going to lie to you. It was a tough long winter because of that, but we’ve run good here the last couple weeks. We were really fast at Richmond and got spun out. Ran really good at Darlington and we were fast as hell today. But, it feels really good to put it all together."

CHRIS GAYLE, crew chief, No. 11 OneMain Financial Toyota Camry, Joe Gibbs Racing
What was it like to go to victory lane as a crew chief?
“It’s hard to describe. We wanted to do this last year and we went through a lot of times last year where we were just kind of getting on the same page. A new team for Elliott (Sadler) and my first time being a crew chief and we went through some struggles of just kind of communication and understanding each other. That makes it that much more sweeter right now. To go through that, to talk about in the off-season, to sit down and commit to doing this again and to be on the same page and come out early and get this win out of the way it means a lot."