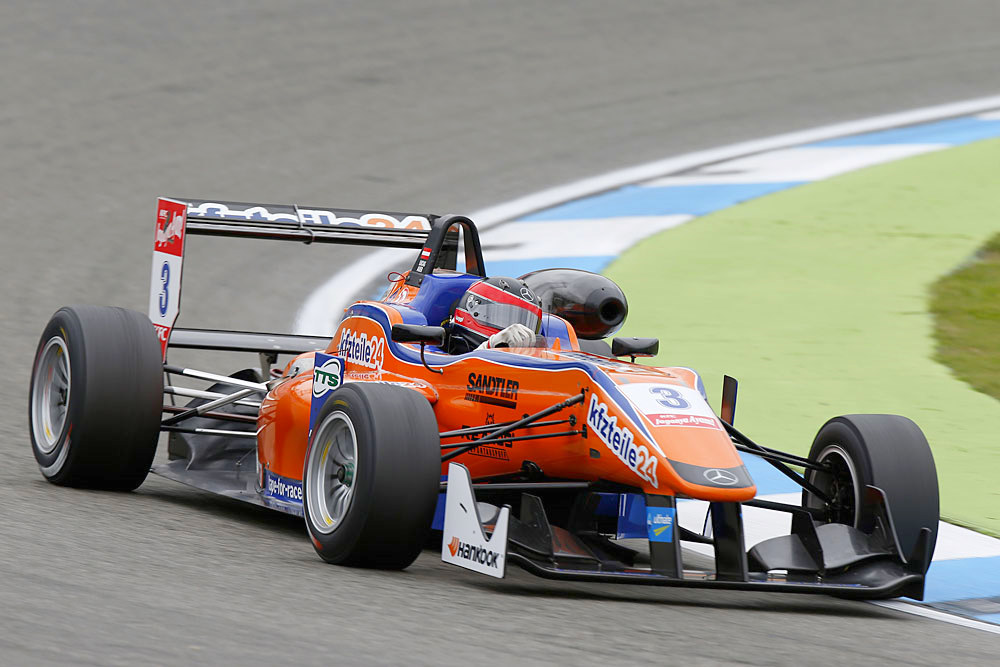 At the 4.574 kilometers long Hockenheim Baden-WÃ¼rttemberg, Lucas Auer (kfzteile24 Mucke Motorsport) celebrated his first victory of the season in the FIA Formula 3 European Championship. Starting from pole position, the 19-year-old Austrian took the lead and went on to win after 22 laps from Edward Jones (Carlin) and Jordan King (Carlin). Lotus F1 junior driver Esteban Ocon (Prema Powerteam), who dropped back from third to ninth place due to a technical problem on the final lap, remains points’ leader in the FIA Formula 3 European Championship.

The race started with plenty of action: on the opening lap already, Max Verstappen (Van Amersfoort Racing) and Nicholas Latifi (Prema Powerteam) collided at the hairpin and retired. Only a few meters later, the following collision involved Michele Beretta (Eurointernational), Gustavo Menezes (Van Amersfoort Racing) and Alexander Toril (ThreeBond with T-Sport); Antonio Giovinazzi (Jagonya Ayam with Carlin) already retired on the opening lap. The clerk of the course sent out the safety car for one lap.

Lucas Auer (kfzteile24 MÃ¼cke Motorsport): “My start was good and the pace was great throughout the race. Nevertheless, it wasn’t an easy race. Driving consistent lap times during the entire race distance was an important factor and I managed to do so. Being on the top step of the winner’s podium for the first time this season is a great feeling."|

Edward Jones (Carlin): “I had a good start and already managed to take over second place in the first corner. Lucas was too quick for me, but I succeeded in keeping Esteban at bay. That wasn’t easy, because he was quick."

Jordan King (Carlin): “My first few laps in particular were very good. At the start, I managed to gain one place, I got another one in the second corner and I made up more places on the inside line at the hairpin. Finally, I overtook another opponent in the Mercedes arena and thus I was already fourth after only one lap. After that, I tried to save my tires a little bit. Esteban’s technical problems were the reason that I still ended up third."