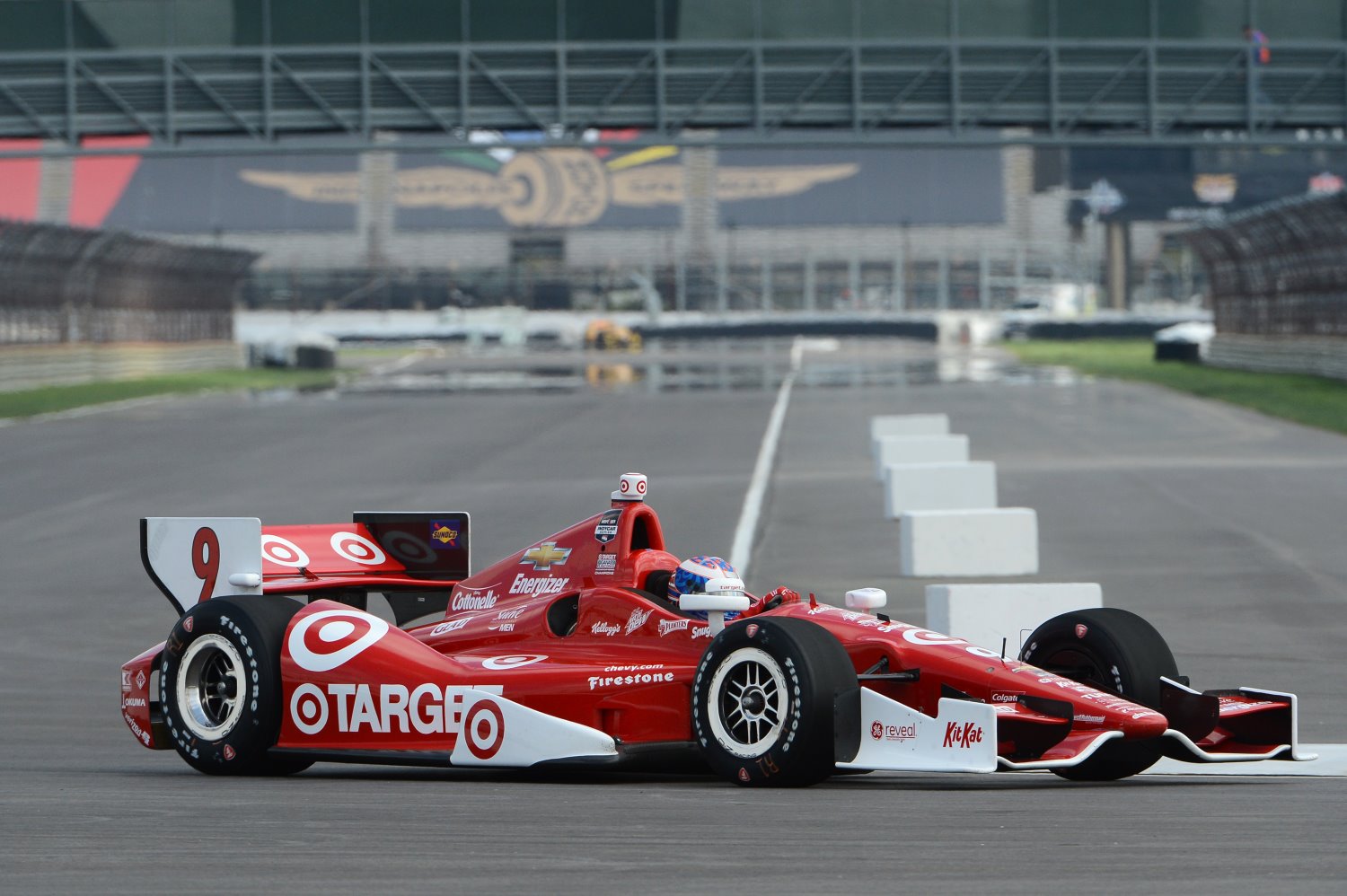 It didn't faze the drivers that they were crossing the Yard of Bricks on the front straight in a clockwise direction.

"Driving the car it doesn't feel strange because you're focused on hitting your marks. But every time I'm on pit lane and looking at the cars going out it just doesn't look right," said Ryan Briscoe, who was second quickest overall at 1 minute, 9.6558 seconds in the No. 8 NTT Data car for Ganassi Racing. "It's just a lot of fun to drive and fun to be learning a new track."

Five hours of track time provided drivers and teams an opportunity to get a baseline for the Grand Prix of Indianapolis practice sessions May 8, when lap times will be considerably more crucial. The three rounds of qualifications are May 9 and the standing start for the 82-lap race is at 3:43 p.m. (ET) May 10.

Less than 24 hours later is the initial practice for the 98th Indianapolis 500 – in a counter-clockwise direction on the 2.5-mile oval.

The top 19 cars were separated by less than a second.

Will Power, the pole sitter three days earlier for the Honda Indy Grand Prix of Alabama at Barber Motorsports Park in the No. 12 Verizon Team Penske car, topped the morning session time chart at 1:11.2128 seconds as teams and drivers made multiple car adjustments to pair with the hardest compound of Firestone primary tires (also to be used at Mid-Ohio in August). The alternate red tires, which trade more grip for quicker degradation, will be available for race weekend.

The new track received high marks for its flow and raceability, which will be enhanced when more tire rubber is laid in the turns. Section times included 196 mph down the front straight into the sharp right-hand Turn 1 and 184 mph on the Hulman Boulevard straight entering the left-hand Turn 7.

"Passing is going to be really good because the brake zones are so big and heavy," Briscoe said. "Turn 1 and down the Hulman Boulevard straight into Turn 7 will be big passing zones. You come out of Turn 4, sort of a medium-speed corner, and then flat out through a chicane going up through the gears almost as fast as the front straight into another big brake zone. You have those two corners and overall it's really fast and flowing and lots of changes of direction."

Originally laid out for the Formula One race from 200-07, the road course underwent a $5 million reconfiguration and infrastructure upgrade that includes new viewing mounds for spectators looking over the oval Turn 2. Hundreds utilized the vantage spots during the test day under mostly cloudy skies.

The test marked the first time that Justin Wilson made clockwise laps at the facility since his 2003 Formula One appearance when he finished eighth for Jaguar Grand Prix.

"It's a challenging track, trying to get the power down and get the entries just right," said Wilson, driving the No. 19 Dale Coyne Racing entry. "I think this new track is going to be a lot better. The corners leading into the back straight give you a lot of options and so does the corner leading into the front straight, so you can definitely try and set something up and the straights are long enough that you can definitely make something happen."

Added Hunter-Reay, the race winner at Barber Motorsports Park: "I'm really excited about the course; it's a lot of fun in the race car. Big, long straights leading to tight corners will lead to plenty of passing. I think it's going to make for a great show."

SIMON PAGENAUD (No. 77 Schmidt Peterson Hamilton Motorsports Honda): " It's a beautiful layout. They've done a really, really good job here. It suits the IndyCar really well, I think. It's very smooth. It's the smoothest track we go to. It's enjoyable. Quite a bit of high-speed corners, medium-speed corners, a lot of braking, which is going to be good for racing. I enjoyed it. I think the rhythm of the track is enjoyable as a driver. Chicane, seven, eight, nine section, is quite enjoyable as well. You get pretty busy in the car during the day. That was a lot of fun today."

SCOTT DIXON (No. 9 Target Chip Ganassi Racing Chevrolet): "I've obviously got a big smile on my face. The track was so much fun today. The thing they captured, it's a demanding circuit. The cars all seem very close which is going to create some fantastic racing. These big straights, I think Brazil is probably the only other time we've had a straight similar length like this. You're actually a lot lower here. The sections, especially (Turns) 7, 8, 9, 10 keeps you on your toes. I'm really impressed with how everything's gone. Even the curbing, they've done a fantastic job."

RYAN BRISCOE (No. 8 NTT Data Chip Ganassi Racing Chevrolet): (Turns) 1 and 7 are the big pass zones. I think just huge improvements over what was the F1 track with extending the straight down the middle, slowing down Turn 7, then opening up the next set of S's in (Turns) 8, 9 and 10 where it used to be very slow and now it's really fast and challenging. Great track. Great job by everyone here that was a part of making it happen."

TAKUMA SATO (No. 14 ABC Supply/A.J. Foyt Racing Honda): "An interesting day. They've done a fantastic job in terms of laying down the road course. The circuit, the corners, curbs-everything seems to be very, very well done. The track is very smooth and fun to drive. It's nice to be back in Indy on a road course. It's been a long time since I drove the road course here and the layout is pretty much different [from the F-1 course Sato ran here]. In the morning it was a slow start, we had a little issue which caused a delay and the track condition was very green. In the afternoon, the track quickly rubbered down so it got quicker and quicker. We tried a couple test items and I think we made good progress. Overall I think it was a productive day. We're a little bit behind so we need to work really hard but we collected valuable data for next week's Grand Prix."

JUAN PABLO MONTOYA: (No. 2 Verizon Team Penske Chevrolet): "First I have to say that the track is phenomenal. They did a great job with it and it's a lot of fun. The No. 2 Verizon Chevy was pretty solid today. We have some areas that we want to work on when we get back, but we have a good place to start. Some areas of the track have low grip and some have a lot of grip. So we just need to find that balance for the race."

HELIO CASTRONEVES (No. 3 Verizon Team Penske Chevrolet): "It was good to get out there today and get a feel for the track. It's spectacular and I think we'll have a good show next weekend. The times are so close that it's crazy. I think you'll see the push to pass and the draft down the frontstretch really come into play. We know of a few areas that we need to work on with the No. 3 Verizon Chevy, but overall we were happy. There is only going to be one winner of the inaugural Grand Prix of Indy and I want that to be me."

MIKE CONWAY (No. 20 Fuzzy's Vodka/Ed Carpenter Racing Chevrolet): "I think the track is very cool. They have done a very good job with the setup. In terms of the testing for us, we struggled most of the day. But we found a direction in the late afternoon that I think we improved the car. We didn't get to put on new tires so I think we could have gone quicker. Hopefully we can have a good start with the race car when we come back next week for the first round of practice. I'm not sure where we stack up right now but we do need to find some more speed."

MARTIN PLOWMAN (No. 41 Alfe/ABC Supply/AJ Foyt Racing Honda): "We accomplished a lot today. We encountered quite a lot of problems this morning and they bled into this afternoon's session, so we were fighting fires, which I guess is a good thing that they happened now in testing rather than when it matters. I think we definitely made progress as the day went on but we were fighting a few problems here and there. They weren't things that we could fix during the test day-they were overnight changes. We know we have time to gain from those things. From my side I felt like I got comfortable, and I'm confident when we come back here in a week's time, we'll be right there and challenging at the front." (About the track): "I like the track, it's heavy-braking; it's technical in a few places, really fast change of direction corners and it should be a good racing track in terms of overtaking. We should see a lot of passes and hopefully put on a good show for the fans."

GRAHAM RAHAL (No. 15 National Guard Honda): "This is one of the best road courses we go to. I had a blast out there. The last section – Turns 7, 8, 9 and 10 are a hoot. The speed on the straight is up over 190 mph and it's the fastest place we go already and we didn't expect that at all. When we pulled out to do our install lap I came in and told them I thought we were out of gear already so that's why we didn't run the first hour and 20 minutes. I think the race will be really good, there will be a lot of passing. We (drivers) all gave our input. I told them what I thought and Kanaan clearly had a lot of voice in this as did Briscoe who was here with me at the initial test and gave Derrick (Walker) some ideas of what we thought needed to be done. Pretty much what we mentioned then is what we have now. It is really fun. I hope we get a great crowd because I can tell you we will put on a good show here. The thing that makes this different is that it's IMS. This place genuinely cares about making a good race track. The curbs are phenomenal as is the layout. Unfortunately our day ended early when we had a problem with something engine related."

ORIOL SERVIA (No. 16 Rahal Letterman Lanigan Racing Honda): "I think the track is a lot of fun. It's what we drivers always ask for; long straights so you can make passing spots, hard braking areas that are challenging and create overtaking possibilities and some interesting corners in the middle. They are fast and challenging so I think it will be a good race for sure. We did a lot of work today and now we need to go through all of the data to understand which things, and why they were better. I still think we got close to the front which is definitely what we wanted to do but we still have a little bit to improve but overall it was a good day."