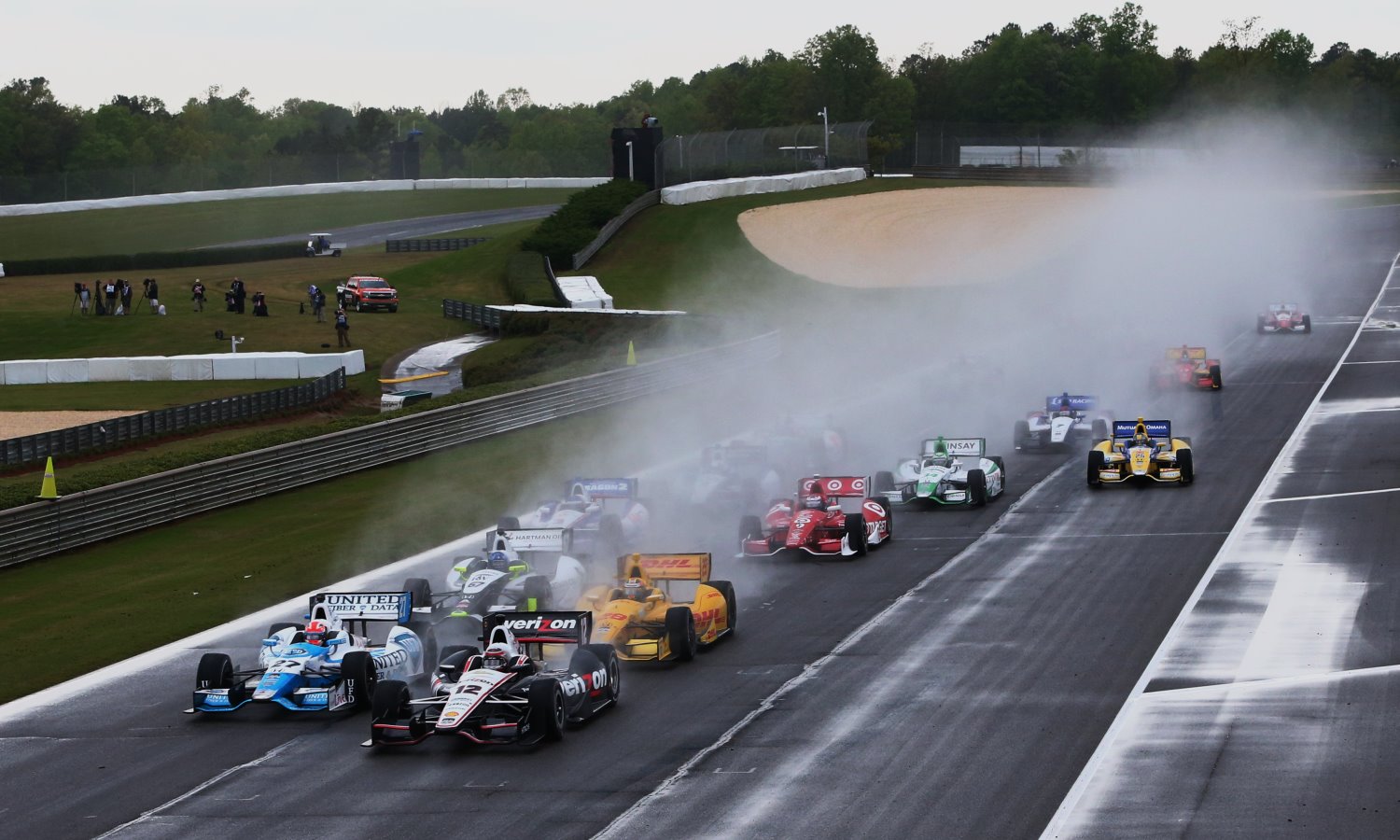 UPDATE As an IndyCar fan, I agree completely with the decision by race officials to shorten the Barber race distance to accommodate the television window. The decision may have impacted race strategy decisions, however it is really a specious argument as the situation did not prejudice any team. It was the same for everyone. As professionals, I am confident the teams had plenty opportunity to determine their strategy.

As a fan, who sat in front of the television on a beautiful Sunday, I was very happy to get to see the race. The quality of the race was not diminished for me in any manner by the decision. If the race was postponed until the following day, I would have not been able to watch it and I am sure the same is true for many fans.

For a sport that has ratings that are dwarfed by bass fishing and bowling, I believe that the race officials made their decision in the best interest of the fans both at the track and in front of their televisions who waited out a long, boring race delay, and they should be applauded for this. Ira Fierberg

04/29/14 IndyCar officials have a habit of not making the best decisions when it comes to racing after it has rained at a track.

Sunday’s Honda Indy Grand Prix of Alabama at Barber Motorsports Park was a 100-minute timed race rather than 90 laps as planned due to severe thunderstorms that moved through the area, forcing a two-and-a-half-hour delay. It started just after 4:30 p.m. local time, with just under three hours remaining until sunset in the Birmingham, Ala., area.

Officials confirmed moments before the command to start engines that it would become a timed event. That forced teams to alter their race strategies.

Why didn’t officials decide to postpone the race until the following day to ensure the full 90-lap distance?

Perhaps television executives have more say than IndyCar officials when it comes to decisions on weather issues during a race. NBC Sports Network televised the event, but the network was committed to air an NHL Stanley Cup playoff game at 8 p.m. ET.

NASCAR has a policy that it will not start a race unless it can be run in its entirety. A NASCAR event does become official when half of the scheduled laps have been completed.

The IndyCar race at Barber finished after 69 laps — 21 laps short of the scheduled distance. Ryan Hunter-Reay from Andretti Autosport won it under caution. Rookie Mikhail Aleshin crashed with less than eight minutes to go, forcing the fifth caution on lap 66.

After finishing third in the race, Scott Dixon, the defending IndyCar champion, made a good argument why it should have been the full 90 laps instead of a timed event.

“I think it’s kind of annoying," Dixon said. “The race should be the full distance. To have to shorten these races for TV, you know, I understand the difficult predicament that everybody is in, but these are championship races. They all pay the same amount of points. When you decide to take 30 laps off them, I think it changes strategy a lot, and you’re constantly chasing that window. Then ultimately you finish on a caution, too, which is also a bit of a bummer for the fans. In the future, hopefully we can find a way around that."

“I don’t think I could have said it much better," Andretti said.

Dixon was battling Andretti for second place just before the final caution occurred. Dixon had finished in the runner-up spot in each of the first four IndyCar races at Barber from 2010-13.

Will Power started on the pole and had a somewhat comfortable lead over second-place Hunter-Reay until lap 16 when Power spun off the rain-soaked course and nearly collided into the barrier. That allowed Hunter-Reay to take the lead. He went on to lead a total of 40 laps, including the final 18.

Hunter-Reay likely would’ve won the race had it gone the full distance. He was well ahead of Andretti at the time Aleshin crashed.

But something could have happened to Hunter-Reay if there had been 21 more laps run, such as a blown tire, an accident, engine or mechanical failure or simply losing the lead to another competitor after a restart.

“I’m confident we would have won either way," Hunter-Reay said. “I had a great car in the dry. It was a dream to drive. When you’re having that much fun driving a car, usually things come out pretty well. I just wished it finished under green."

Hunter-Reay earned 53 points for the win, while Andretti picked up 41 points and Dixon 36.

There are 15 races remaining this season, but who knows, the battle for the IndyCar championship could be decided by just a few points.

IndyCar should adapt a better policy to ensure that races are run in its entirety instead of timed when weather becomes an issue. 1070TheFan.com