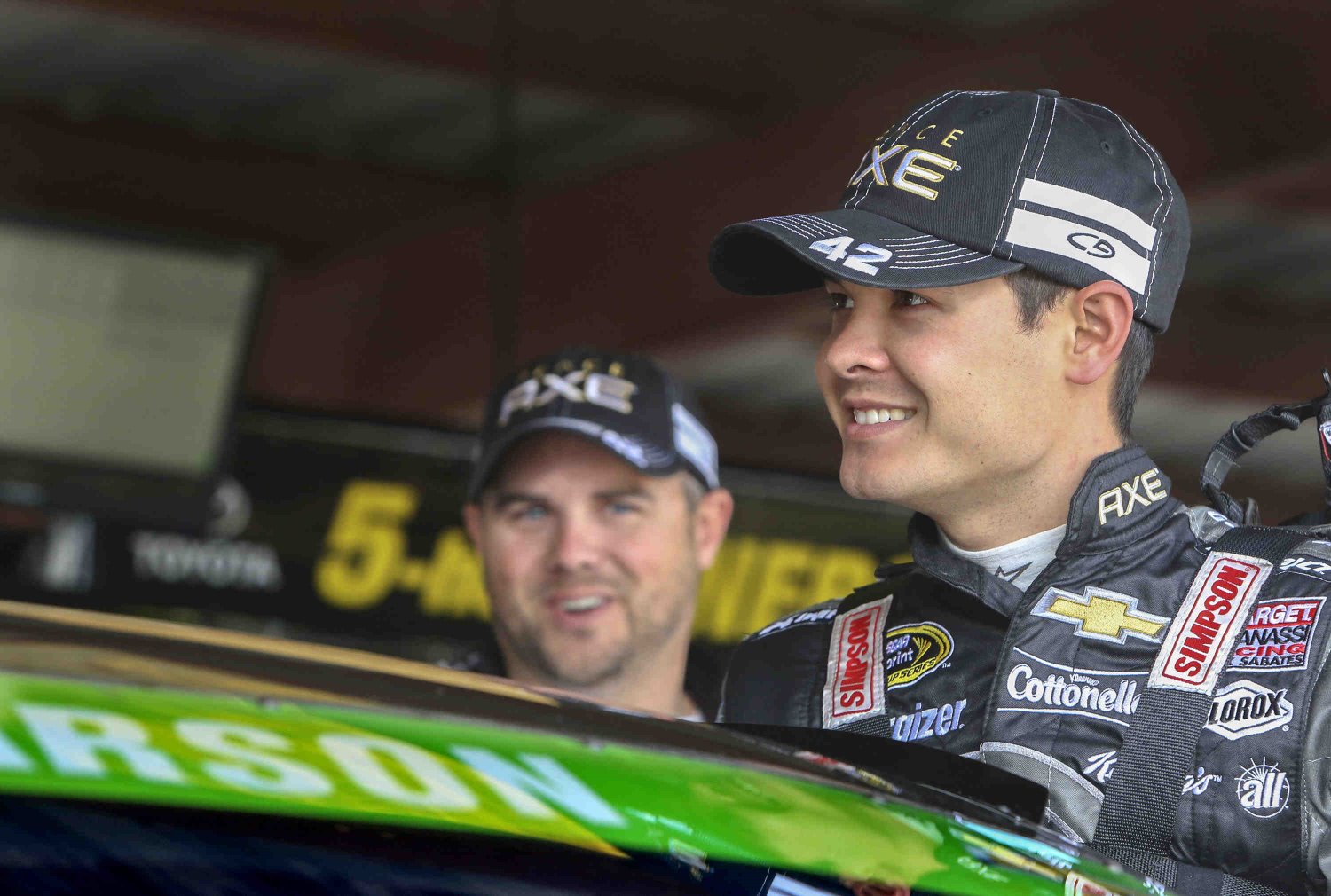 KYLE LARSON, NO. 42 AXE PEACE CHEVROLET SS, met with members of the media at Richmond International Raceway following the cancelation of qualifying. Based on the rules set forth by the NASCAR Rule book the starting grid has been set based of first practice times. Larson was the quickest in the first session and will lead the field to the green flag for the first time in his NASCAR Sprint Cup Series career.

TALK A LITTLE ABOUT YOUR PRACTICE RUN AND STARTING FIRST TOMORROW NIGHT:
“We were debating before practice started to start in qualifying trim or go to race trim and do that. I wanted to start out in qualifying trim and was able to kind of talk Shine (crew chief Chris Heroy) into doing it. I wasn’t sure what to expect on my lap, but we came here and tested last year for Goodyear and had a good baseline. I was pretty confident with going out in qualifying trim without getting used to the car yet. Was able to lay down a fast lap and then we switched over to race trim and we were good in that too. Excited about the AXE Peace Chevy, I think it should be a good race tomorrow. It’s nice starting off from the pole. I don’t know if I will count it as my first career pole, but it’s still pretty cool to start on the front row."

YOU ARE SO USED TO SPRINT CAR SHOWS WHERE YOU GO OUT AND YOU DON’T HAVE HARDLY ANY PRACTICE TIME YOU JUST HAVE TO GO FAST RIGHT AWAY. DO YOU THINK THAT HAS HELPED YOU THIS YEAR AND DID THAT HELP IN A SITUATION LIKE TODAY?
“I don’t know. It’s tough to answer. I think it helps a little bit, but as far as being fast right off your first couple of laps, no. I think since I haven’t been to a lot of these tracks in the Cup car it takes me a few laps to get to where I am comfortable and can run into the corner hard and get back to the gas hard and stuff like that. You see the fast guys that seem to go out right from practice they lay down some quick laps. We are usually 12th or so after the first couple of laps. But I think the sprint car stuff helps from being able to learn new race tracks quicker than others just because in sprint cars you go to 80 different race tracks a year or something like that. You have to figure it out quick in five laps; I think that part of it helps when you go to a new track. I have been to all but two tracks, so I guess it might help at Pocono and Sonoma hopefully."

WOULD YOU RATHER HAVE WON THIS ON YOUR OWN MERITS INSTEAD OF JUST BY BEING FAST IN PRACTICE?
“Yeah, but I’m still happy with being on the pole. But yeah it would be nice to get a legit pole. I don’t know if we would have gotten it had it not rained. We worked all second practice on qualifying runs. We were seven tenths slower than our lap that we laid down in first practice and almost two and a half tenths slower than the fastest guy in second practice. I doubt we would have been on the pole, but I will take it how we get it."

HOW INDICATIVE IS THIS IN TERMS OF HOW YOU FEEL LIKE YOUR CHANCES ARE GOING TO BE COME RACE DAY?
“I definitely think starting out front helps a lot. Before I came here last year because I did well in the K&N car and I thought this track suited my style quite a bit. Then I came here in the Nationwide car and struggled. I know I got average finishes, but I felt like we were really bad. I wasn’t too excited coming here this weekend, but started off Nationwide practice we were really good. I think we have a winning car over there. I thought in Cup practice we were a top five car. I’m definitely excited and I think getting the pole, even though it’s in practice helps the confidence more. I’m looking forward to it tomorrow."

DO YOU THINK THERE WILL BE AN AFFECT ON THE TIRES IN THE NATIONWIDE SERIES RACE WITH THE RAIN WASHING AWAY ALL THE RUBBER? THERE WERE CONCERNS ABOUT RIGHT-FRONT TIRES YESTERDAY.
“It should make the tires wear a little bit quicker. I had heard if we got rain that they were going to throw a competition caution. I haven’t heard if that was going to happen or not. Hopefully they do because the right-front’s (tires) were wearing pretty quickly. I don’t know. I think teams will figure it out. As the rubber gets laid down the tire wear should be better throughout the race. I think at some point after the first caution it should be back to normal."

SAW YOU TALKING TO CLINT BOWYER AS HE LEFT. WERE YOU TRYING TO PICK HIS BRAIN ABOUT THE TRACK OR WHAT WERE YOU TALKING ABOUT?
“He was more trying to pick my brain. (Laughs) I mean, not really trying to pick my brain but in that second practice we both started off in qualifying trim and I think we were one of only a handful to start off in qualifying trim in second practice. We pitted next to each other so he came over to ask if I was really tight, because he was really tight and pretty much had the same feedback. And then he just gave me a little advice. Something I kind of already knew which was be careful getting loose into both turns in this track. Because into one you are on the brakes so it’s easy to get loose and he kept warning me about that. I hadn’t been loose in practice yet so that made me feel good about my car. It’s nice to be reminded of those little things that you might not think about so I thank anybody that can give me some tips."

YOU ARE USED TO RUNNING SO MANY NIGHTS IN THE SPRINT CARS. AFTER THIS BREAK, ARE YOU GLAD THAT IT CAME SO YOU COULD HIT THE RESET BUTTON AS A ROOKIE OR DID YOU WANT TO KEEP RACING?
“I hated the break. But man I am so used to flying out on Thursdays to go to the racetrack it felt like forever to get to Thursday of last week. Then I had to wait another week to get to this one. So I was going to go to Devil’s Bowl to watch the Outlaws race if our team was going to go there and run. But they didn’t have the tool cart ready so we didn’t go there. Their first night is tonight in Pennsylvania at Williams Grove if it doesn’t rain so I will keep up to date with that. But yeah, that break was really long and I wish we didn’t have any breaks. Wish there was no offseason either."

Forecasts initially called for inclement weather to potentially arrive around lunchtime. Though early practice sessions for Sprint Cup and the touring NASCAR K&N Pro Series East went without a hitch, the skies alternated between mostly sunny and mostly cloudy for the majority of the morning and early afternoon.

Rain began to fall seconds before the Nationwide Series qualifying session was over, throwing an already busy Friday schedule into disarray.

The Nationwide Series' ToyotaCare 250 — the tour's eighth race of the season — was scheduled for a 7 p.m. ET start time (ESPNEWS). The K&N circuit's Blue Ox 100 is tentatively scheduled to start at 9:40 p.m. ET after the Nationwide event.
The track-drying process began at 6:50 p.m. ET.

Sprint Cup qualifying was scheduled to run at 5:10 p.m. ET, but now the starting lineup is determined by drivers' best times in the first practice, putting rookie Kyle Larson on the Coors Light Pole.

Following Larson in Saturday's lineup will be Brad Keselowski and Clint Bowyer, respectively.

Kasey Kahne and Kevin Harvick will round out the top five.

It was the first go-round on the .75-mile track for the Nationwide Series using the new knockout-style, multicar qualifying format. The Sprint Cup Series will have to try again when it returns to the track in September.