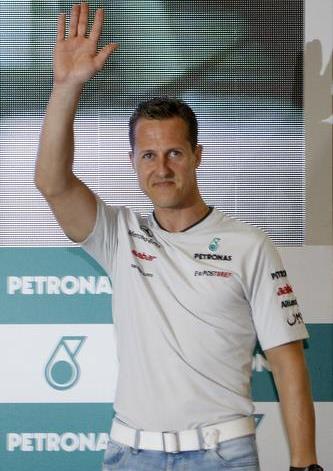 UPDATE #2 (GMM) A respected German journalist has denied rumors Michael Schumacher has woken up from his coma.

The reports late on Friday suggested the seven time world champion, already confirmed to be having "moments of consciousness and awakening", had woken up and recognized his wife.

"Sorry, but those rumors from Spain are apparently not true," Nicola Pohl, a respected correspondent for the major German daily Bild, said.

"Kehm just texted me (saying) she hadn't confirmed anything to RTL," she added.

04/06/14 (GMM) Michael Schumacher is making eye-contact and responding to voices, according to the very latest media reports.

Earlier, after a worrying three-month long coma, the F1 legend's manager Sabine Kehm revealed that Schumacher is now having "moments of consciousness and awakening".

The news cheered the F1 paddock in Bahrain, but now there are apparently even more signs of improvement in the former Ferrari and Mercedes driver's previously life-threatening brain injuries.

Family friend Jean Alesi, a former F1 driver, has visited Schumacher several times in hospital, and he is now much more optimistic about the future.

"First, Michael responded only to pain, when he was pinched for example," he is quoted by Speed Week. "But that can also be an unconscious reaction of the body.

"During my last visit I realized that something was beginning to change for the better. I felt with the family some relief, a great joy about how things were developing.

"It is fabulous," the Frenchman claimed, "even though the path back to life is still long."

Felipe Massa, a former Ferrari teammate of Schumacher's and another close friend, seemed to confirm that the seven time world champion is now responding to voices.

"I cannot really put into words how excited I am about it," the Brazilian admitted in Bahrain.

"I prayed every day for Michael and they were answered. Now I hope to continue to hear good news from Grenoble," Massa added.

04/04/14 (GMM) Positive news emerged from Grenoble on Friday, with Michael Schumacher's manager revealing he is showing "moments of consciousness and awakening".

The former Ferrari and Mercedes driver has been in a coma for more than three months after a skiing fall, and some reports had suggested hope was fading he would ever recover.

"He shows moments of consciousness and awakening," she added in a brief media statement.

Kehm said she would not disclose "details".