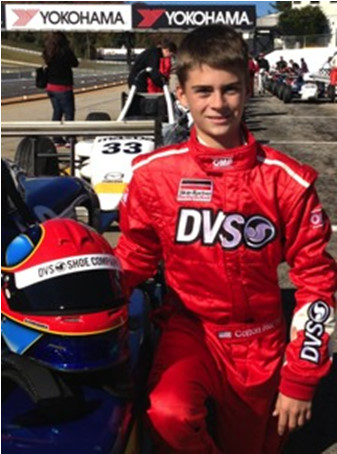 Here's one for the record books: Colton Herta will make his Cooper Tires USF2000 Championship Powered by Mazda debut this weekend, becoming the first driver born this century to compete in an INDYCAR-sanctioned race.

Herta, who celebrated his 14th birthday March 30, won the Pacific F1600 Championship in 2013 and was the runner-up in the Skip Barber Racing Summer Series. He's the eldest son of Verizon IndyCar Series team owner and former racer Bryan Herta.

"It's a ginormous step in my career," said Herta, of Valencia, Calif. "I'm very excited."

He was sixth quick in the initial practice session and seventh in the afternoon on the 2.38-mile, 17-turn Barber Motorsports Park, which hosts Rounds 3 and 4 of the season April 26.

"Everybody has been here before us (competing in the Mazda Road to Indy Winterfest) so the biggest issue was learning the track," Herta said.

Herta, driving the No. 98 car for JAY Motorsports, was too young to compete in the March 29-30 opening doubleheader at St. Petersburg, Fla., according to the rulebook. Some other things he's still too young to do:

*Sit in the exit row of an airplane.

*Hold a driver's license – for a passenger car to get to the racetrack.

*Get a work permit.

*Apply for a passport without parental consent.

Bryan Herta won the Barber Formula Ford and Barber Saab Pro Series titles and then dominated the 1993 Indy Lights championship. He graduated to Indy car racing in 1994 — at age 23 — with A.J. Foyt Racing.