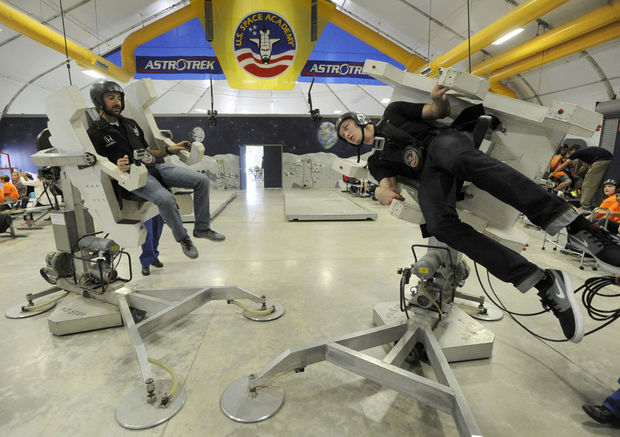 James Hinchcliffe steered the massive spaceflight trainer contraption to its finish platform and proclaimed, "The Eagle has landed."

Considering his fellow IndyCar racer Josef Newgarden was still wrestling with the controls of his mechanism and darn near lost in space, Hinchcliffe then taunted, "Take that Josef. First win of the weekend!"

Hinchcliffe then added, "I don't want to say it was amazing … but wasn't it?"

It was a morning of equal amazement at the Space and Rocket Center's Space Camp, for both the drivers and their audience that was, as the cliché goes, kids of all ages.

Hinchcliffe, a 27-year-old Canadian , drives the No. 27 United Fiber and Data car for Andretti Autosports. Newgarden, a 23-year-old from the Nashville suburb of Hendersonville, is in the No. 67 Hartman Oil Car for Sarah Fisher Hartman racing.

The pair sampled pretty much everything Space Camp had to offer – they even extended their stay and missed a track tour at Barber – including the Multi-Axis Trainer. Or, as known in laymen's terms, that gizmo that spins around in circles and upside down real fast and makes you feel like you're going to throw up something you ate two weeks ago.

They also spoke to a large group of campers from Dubai and Puerto Rico about the importance of teamwork, drawing a parallel to the teamwork in space missions. They also stressed the notion of STEM – science, technology, engineering and mathematics – that is a current mantra for Space Camp and others in the technology field.

Racing and space exploration have "a huge team of people and everybody involved is important," Hinchcliffe said.

"We push the pedals and we turn the wheel, but we have to be smart, too," Newgarden said. "We have to be able to communicate."

The engineering of the car, he said, "is all math. It's all computer-driven and everything has a calculation."

Hinchcliffe stressed the importance of "hard work. It's not easy to be a race-car driver or an astronaut or an engineer. It's the ones that buckle down and keep focus and work ethic that will be successful."

For Hinchcliffe, this was a return visit.

He attended Space Camp in Florida as a youngster, then attended Huntsville's Space Academy in 1996. Hinchcliffe, a three-time winner in three-plus seasons in IndyCar, once had aspirations of being an astronaut.

Because the racers are, well, racers, much of the morning turned into a competition. As Hinchcliffe beat Newgarden in a couple of "sprints" on a device that mimics anti-gravity travel, he calmly pointed out, "This was not my first time walking on the moon."