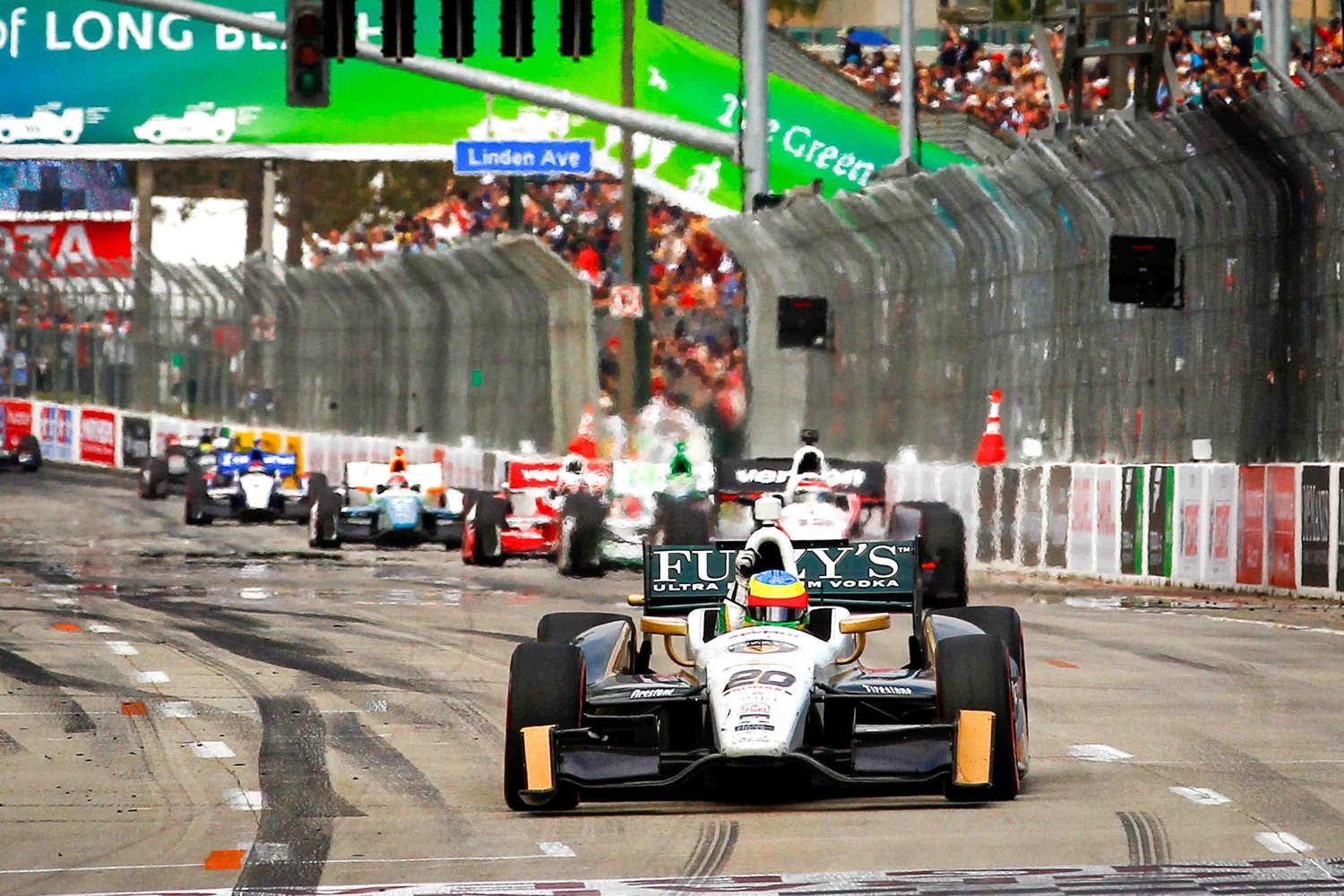 The stunning victory two weeks ago at Long Beach is still fresh in Mike Conway’s mind as he approaches this Sunday’s Grand Prix of Alabama at the picturesque Barber Motorsports Park.

The come-from-behind win in one of the world’s biggest street races put Conway in rare company as a two-time winner of the “Roar by the Shore" and proved that the 30-year-old Brit will be a factor throughout the 2014 Verizon IndyCar Series road and street races. Now, a three-time series race winner, Conway has set his sights on the 90-lap main event at the 2.38-mile, 17-turn natural terrain course east of Birmingham.

"I like the Barber circuit a lot," said Conway, who also won at Belle Isle in Detroit last year. “It’s a cool track, very fast flowing. It is hard to pass there, but it’s still possible. I qualified on the front row in the first IndyCar Series race at Barber. I’d really like to do that again. I feel we can transfer the Long Beach win into a good showing this weekend at Barber."

Conway’s Long Beach win was only the second race in the Ed Carpenter Racing/Fuzzy’s Ultra Premium Vodka Chevrolet and quickly showed the racing world that team owner/driver Carpenter had made a heady move during the off-season. Carpenter, the 2013 Indy 500 pole winner, decided to pull himself from the No. 20 machine in the road and street races and concentrate on racing in the six oval events in 2014.

Carpenter contracted Conway, who scored five road racing wins in 2013 (one in the IndyCar Series and four in the World Endurance Championship for sports cars), to handle the driving chores in the other 12 events.

“I needed to look at the potential of Ed Carpenter Racing," said Carpenter, the only owner/driver in the series. “While I improved in road racing, I felt it was better overall for ECR and our partners to put a contender in the car for the roads. And Mike immediately showed he can find the winner’s circle. People think I was very smart already with the move but I felt Mike always could win with this team. We have a strong organization at ECR."

Conway’s trust in his new team couldn’t have played out better at Long Beach.

“It feels very good to come to the Barber track as the winner of the last Verizon IndyCar Series race," Mike said. “It was a stunning win for the Ed Carpenter Racing/Fuzzy’s Vodka team, as they did a tremendous job preparing the car, making good pit stops and the an excellent strategy for the race. There was a lot of banging and shoving at the start and we broke the right front wing. I think the team was more concerned about that wing than I was during the race. The wing was flapping a little but the car was good. I want to thank Ed (Carpenter) and the team for their great effort at Long Beach. I think we have a great combination with Ed on the ovals and me driving the streets and roads. It felt fantastic to repay them for their trust in me."

The Long Beach win vaulted Conway in second in the currently Verizon IndyCar Series point standings as he comes to Barber Motorsports Park this weekend. A missed radio communication at St. Petersburg while in third cost Conway a possible podium finish there too.

“I can’t really look back at the St. Pete now," he said. “We learned a lot about our team there and how to improve the overall performance. I missed the pits and it cost us. But we came back strong at Long Beach and I believe it can continue the rest of the season. I am anxious to get back on the track with the ECR/Fuzzy’s Vodka squad. We showed that we can take on the big teams and win despite a single-car effort."

Conway will still remember that exciting Long Beach victory lane celebration two weeks ago, but he has already moved past that win and has set his goal for the Barber winner’s circle this weekend.