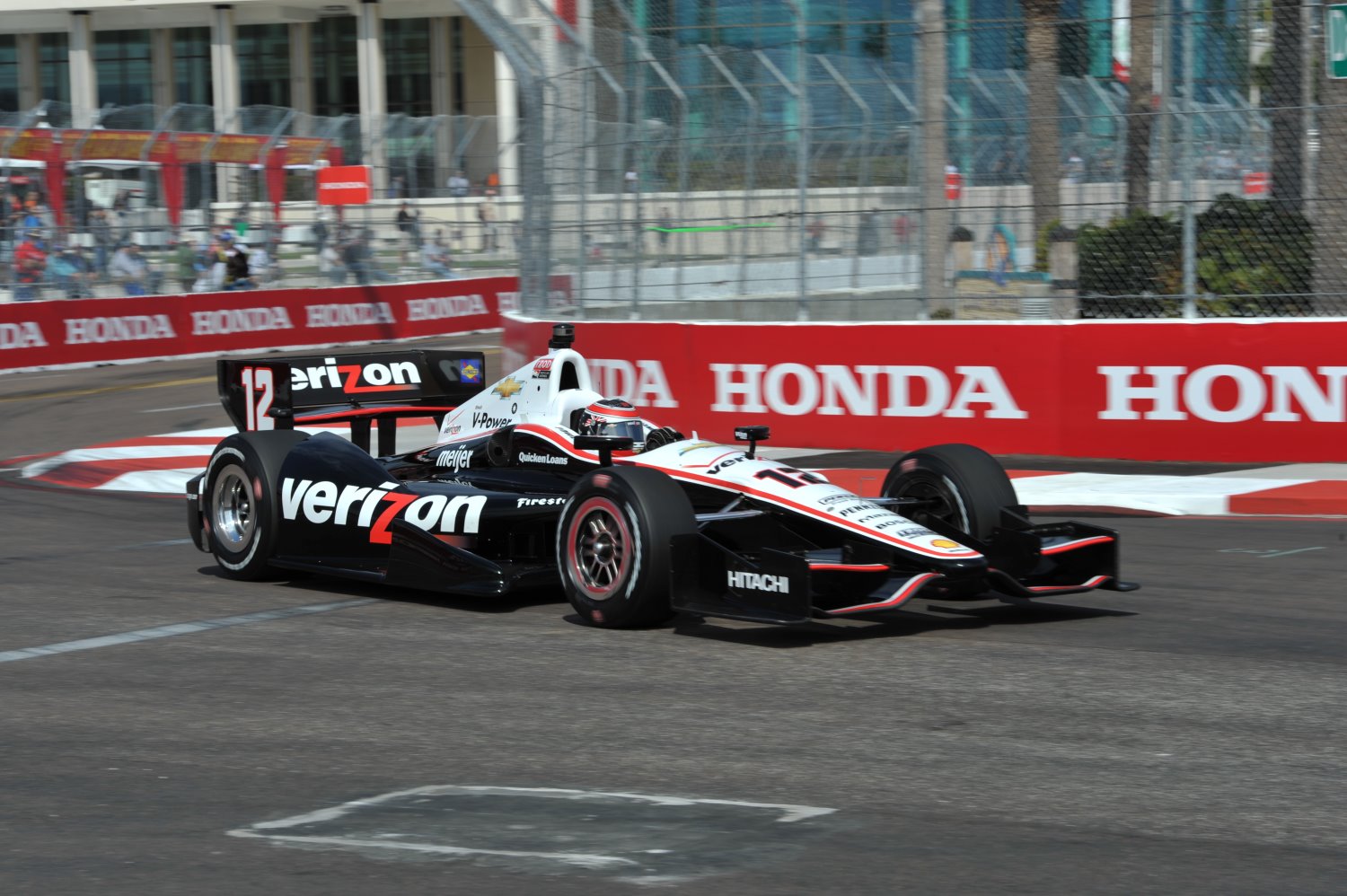 UPDATE Mark Miles hired longtime Ford marketer C.J. O’Donnell last year as the series’ marketing chief. He has developed a campaign, "Rivals," that highlights drivers and competition on the track.

Is the controversy brewing between the Ganassi and Penske teams (noted below) be part of that "rivals" program?

It’s about 8:45 a.m., on a humid, overcast day here St. Petersburg. The sun is beginning to peak out as the Pirelli World Challenge series is wrapping up their qualifying session. Indy Lights presented by Cooper Tires will take to the track at 9 a.m., while the Verizon IndyCar Series will have final practice at 10 a.m. before this afternoon’s qualifying session at 2 p.m.

Weather reports are calling for around a 60% chance of rain. However, our AR1 Weather Team reports the rain (if it does come) will hold off until around 1 p.m. And if the rain does come, it will be relatively short, and shouldn’t cause any major delays or disruptions.

In short, rain may be a factor in today’s proceedings. However, we don’t expect a lot of rain.
We’ll also be interested to see if Honda can continue their form from yesterday. After a disastrous weekend here last year, the Honda teams clearly got the better of Chevrolet yesterday.

Speaking of Chevrolet, their two top teams, Chip Ganassi Racing and Team Penske, engaged in a rather icy war of words yesterday. Of course, the Penske and Ganassi organizations represent the gold standard in Indy car racing. In 2013, Ganassi came out ahead again in yet another fiercely-contested-down-to-the-wire-championship-battle in 2013, with Scott Dixon besting Helio Castroneves in the title chase.

And with the circumstances surrounding last season’s stretch (see Sonoma and Baltimore), the respectful deference that has long been a hallmark of the teams’ rivalry went by the wayside. The best example of this perhaps would be Dixon referring to Team Penske President Tim Cindric as a “piece of s***," in the aftermath of his tangle with Will Power in Baltimore. While one might think six months off might have allowed for a thaw between the two teams, we learned yesterday it has not.

In a USA Today story yesterday, Cindric drew a somewhat awkward analogy between the New York Yankees and Miami Marlins, with the Penske team apparently the long-standing powerful Yankees and Ganassi’s team the upstart Marlins. Understandably perturbed with being referred to as Marlinesque, Chip Ganassi was somewhat dismissive of Cindric’s comments. Reminding everyone his team has won 5 of the last 6 champions The Chipster said he didn’t want to “dignify Tim’s comments."
But that wasn’t all.

Retired Ganassi driver Dario Franchitti, who has taken a consultant with role the organization further upped the ante.

“I think Roger Penske is a class, class operator. He's first class. I thought Tim's comments weren't in any way. I thought they were yeah, I think they kind of summed him up a little bit. If I had the resources that he's had in his hands, I would be a little upset with the success ratio they have had recently."

Allow me to translate: we at Ganassi respect Mr. Penske. He and his organization are “first class," and we are proud of our record against them. However, we don’t believe Mr. Cindric fairly represents the organization Mr. Penske has built. And we’re far from surprised by his recent inane comments.

Yes, when it comes to the Penske-Ganassi rivalry, the gloves are off people. Respectful, deferential rhetoric is so July 2013. And with longtime Penske driver Ryan Briscoe switching back to Ganassi, longtime Ganassi driver Juan Pablo Montoya now at Penske, and both teams now having Chevrolet engines, I don’t see there being much of a thaw anytime soon.

Check in with AR1 for more updates throughout the day.