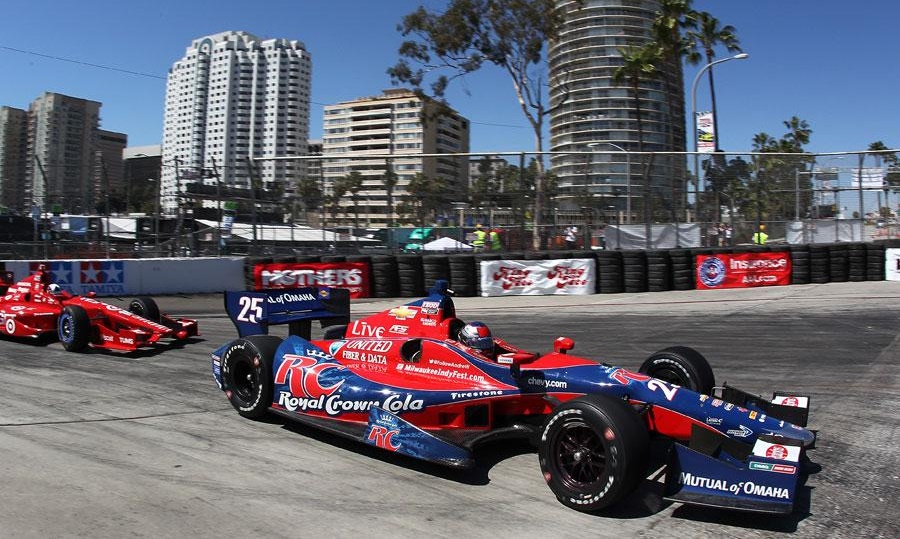 After meeting Tuesday in private, the council requested more time to consider its options. "While the current Long Beach Grand Prix is a successful event for all parties, the question is whether or not there is an opportunity to do even better with a Formula One option," Third District councilman Gary DeLong told Gazettes.com. Of course it can do better, but will the race survive longterm, or will the promoter go bankrupt?

If the city looks at the NBC Sports Network TV ratings, it's likely they will vote IndyCar out. But heck, IndyCar is collecting the big NBC Sports Network check. Pennywise and Pound foolish – it will eventually come back to haunt them. Teams cannot land enough sponsorship because of the minuscule ratings and events like Long Beach get minuscule exposure for the city when the race is on NBCSN. Did you notice the Hulman George owned races are not on NBCSN, but on ABC?

03/05/14 The future of the Toyota Grand Prix of Long Beach's remains undecided as no action was taken in Tuesday night's city council meeting.

"I don't think you can draw anything from them taking no action," Eric Bradley told Racer.com, who covers city hall and politics for the Long Beach Press Telegram. "They can still decide to open it up or simply decide to stay with what they've got with GPALB."

Formula One's attempt to drive into the territory of the Toyota Grand Prix of Long Beach would require extensive street upgrades, pre-built garage areas and other expenditures that could total between $50â€‰million and $100 million, an expert said.

On top of that, the average race hosting fee is $28.1 â€‰million, according to Christian Sylt, editor of Formula Money, a Formula One business data publication.

"That’s a big expense, particularly compared to a series like IndyCar," Sylt wrote in an email on Monday. "In addition to this, F1 circuits typically get none of the revenues from TV rights, trackside advertising or corporate hospitality, so they are reliant on revenues from ticket sales and public or private investment."

In a closed session on Tuesday, the City Council will discuss its lease with the Grand Prix Association of Long Beach LLC, which organizes the annual three-day April event that features six races, including the Toyota Pro-Celebrity, Sportscars, and IndyCar races.

Elected officials will also consider a request by the FIA Formula One World Championship to open up the bidding process for the contract when it expires in 2015.

So far, council members have been reserved in their comments on the issue, preferring first to hear more details in the closed-door meeting about efforts on behalf of Formula One owner Bernie Ecclestone to bring back the series that ran in Long Beach from 1976 until 1983.

Councilman Gary DeLong, the chairman of the Budget Oversight Committee, said, though, that any proposal could not deliver a tax bill to the city.

'We want the event to generate revenue, not expenses for the city," said DeLong, who added that “the Grand Prix Association has done a good job for the city. We need to be very careful before moving to another race organizer."

Currently, the city does not pay any costs associated with the Toyota Grand Prix of Long Beach, now in its 40th year.

Long Beach’s contract with the Grand Prix Association expires June 30, 2015. It requires organizers to reimburse expenses incurred by the city for the race, such as police and fire services. Last year, those expenses totaled $548,414, according to the city.

Race organizers have said the event contributes between $25 million and $35â€‰million to the local economy.

Chris Pook, who helped found the Long Beach Grand Prix in 1975 and was hired by Ecclestone to help him find a venue for Formula One in Southern California, declined to say publicly how much money a Formula One event would generate.

But Pook said the venture would be entirely funded by the private sector.

"There will be nothing asked of the city, other than the use of its streets," he said. "All we’re trying to do here is show the city what a Formula One race can deliver economically. If they decided they don’t want Formula One, we will move on and find a home for it in Southern California. If they want it, then we’ll sit down and have a discussion."

Jim Michaelian, president and CEO of the Grand Prix Association, said a "civic event" that has met or exceeded every commitment made to the city Long Beach is under threat.

"Some, including our sponsors, have called and asked what’s going on," Michaelian said. "They don’t understand why the city wouldn’t be enamored with continuing an event that’s been so successful over the years."

Michaelian declined to state how much the Grand Prix Association pays IndyCar to host the Long Beach race.

He chuckled, however, when asked how the figure compares with Formula One's hosting fee, which Sylt said averages $28.1 million.

"I can tell you, it’s significantly less than that," Michaelian said.

A possible comparison point for what the Grand Prix Association pays for its event might be found in a lawsuit filed in December by the IndyCar Series against Radio e Televisao Bandeirantes Ltda., the promoter of an IndyCar race in Sao Paulo, Brazil.

According to the Indianapolis Business Journal, IndyCar is seeking to recover a seven-figure sanctioning fee. The publication, citing a source familiar with the sanctioning agreement, said IndyCar is asking for just under $10 million for the unpaid annual fee.

Formula One returned to the United States two years ago in Austin for the first time since 2007. However, efforts to host a race in New Jersey with the Manhattan skyline as a backdrop have failed as organizers struggled to raise $100 million to build the course and pay other costs.

If Long Beach does find Formula One attractive, and money can be found, a local race would fit into Ecclestone’s desires to have three races in the United States.

"America is seen as F1’s biggest untapped market and a return to Long Beach would be seen as a way of breaking through to an American audience," Sylt said.