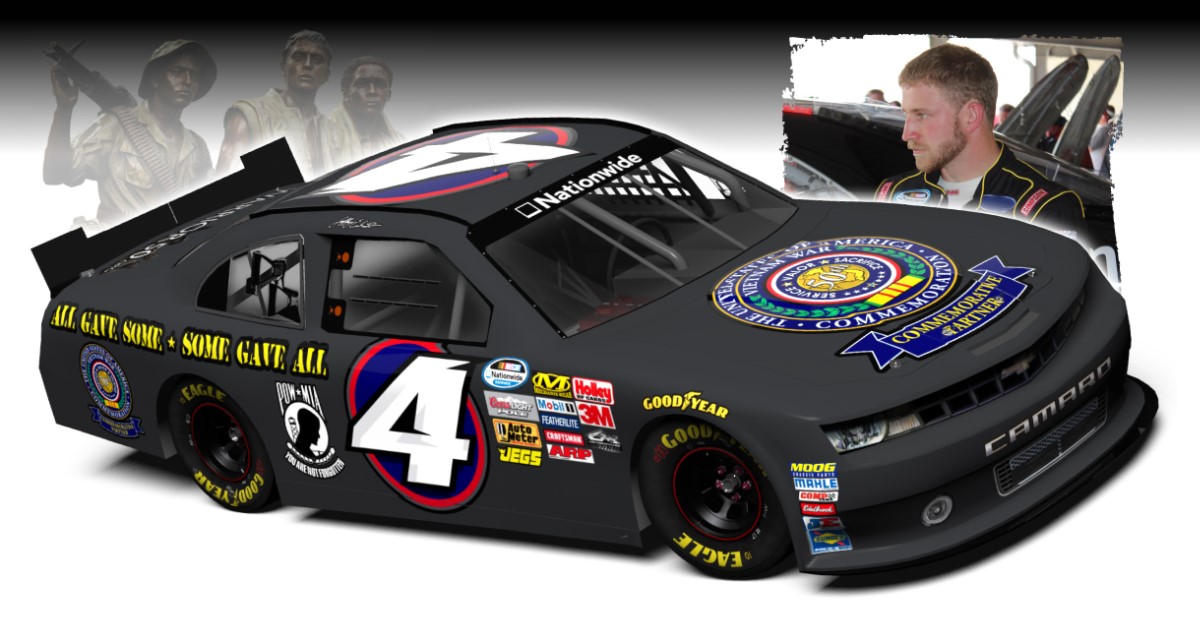 Daytona FL – NASCAR Nationwide series driver Jeffrey Earnhardt, grandson of racing legend Dale Earnhardt, will be bringing an important message to the racetrack. He will be carrying the Vietnam War 50th Commemoration Seal on his #4 Chevy Camaro for the 2014 NASCAR season.

"The President of the United States signed a proclamation to honor Vietnam Veterans for the 50th anniversary of the Vietnam War, and we'll be delivering that message for their commemorative partner Warrior 50", said Jeffrey Earnhardt. "This is a huge honor and I'm humbled to pay tribute to that generation of great Americans. We'll be racing to honor those who served during a challenging time in our history and I look forward to showing the NASCAR fans appreciation to our Vietnam Vets and their families."

Warrior 50 is a non-profit organization that will be honoring our Vietnam Veterans at NASCAR tracks and in communities all across this country. "A great many Vietnam Vets and their families are enormous NASCAR fans so it makes this such an appropriate tribute. The Warrior 50 effort will be entirely funded by contributions from the people. Every grateful American is encouraged to visit www.Warrior50.org to make a tax deductible contribution towards this mission. There is nothing more powerful than an idea whose time has come! These brave warriors fought and died for us and it's only fitting that we do this for them." said Rev Dr. Chuck Gass of Warrior 50.

Lieutenant General Claude "Mick" Kicklighter, US Army (Retired), Director, Department of Defense Office of Commemorations stated, "As Commemorative Partners, Jeffrey Earnhardt and his team join a grateful nation in thanking and honoring our Vietnam Veterans and their families for their service, valor and sacrifice. From Daytona to Homestead and all NASCAR Nationwide Series locations in between, they will be honoring thousands of Vietnam Veterans in their hometowns during each race, for which we are extremely thankful."

Jeffrey Earnhardt's first race featuring the Vietnam War 50th Commemoration Seal will be on February 22 at 1:15 PM (EST) at Daytona International Speedway and will be televised live on ESPN.