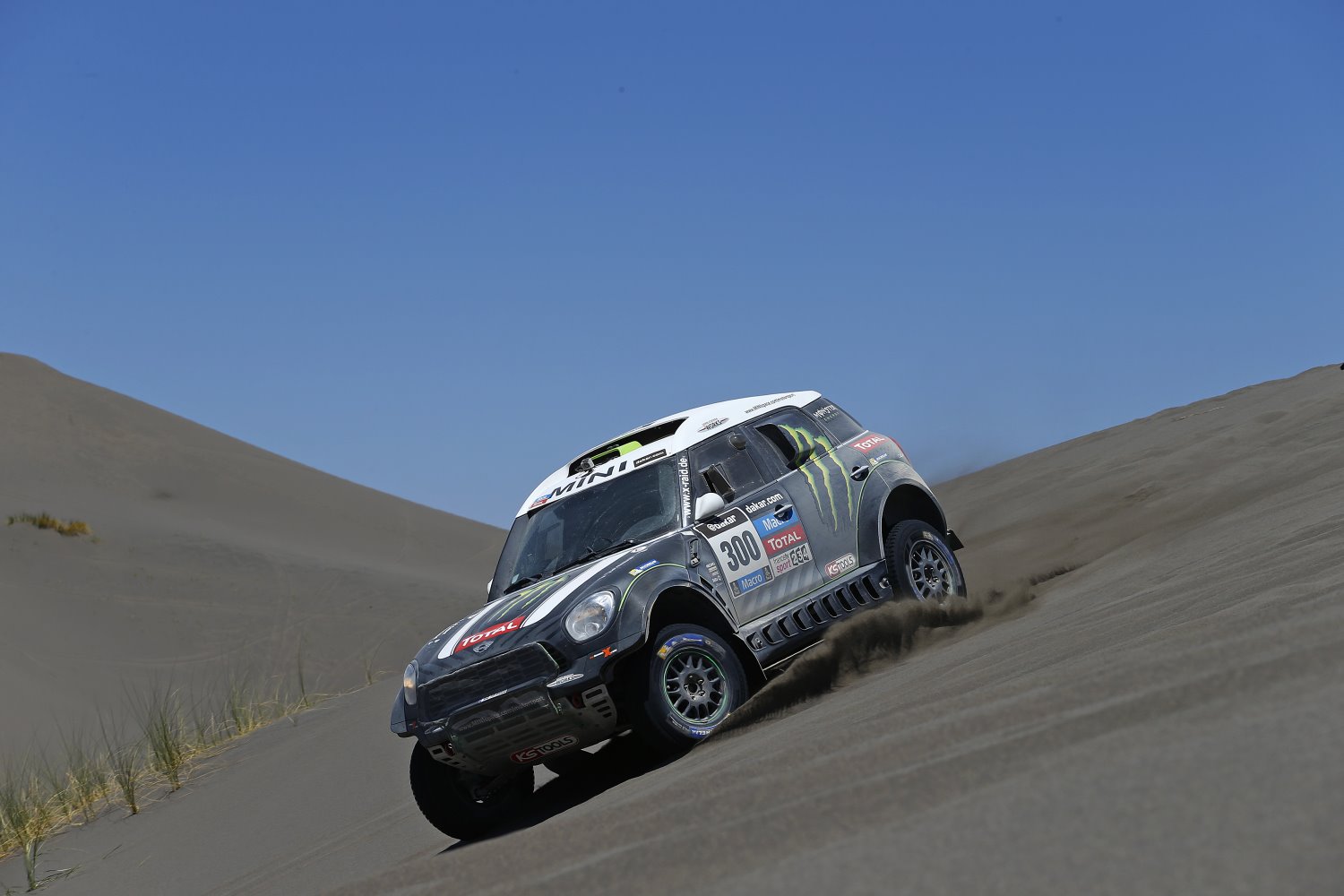 On a 9th stage dominated by the sand, Marc Coma made his mark and reinforced his lead in the general standings whilst picking up his 23rd special stage victory for Bikes in the Dakar Rally, his second in 2014, 1’21 ahead of his now sole rival, Joan Barreda, and 5’28 in front of Frenchman Cyril Despres. In the car category, all-out attack brought an excellent result for Stephane Peterhansel picked up his 3rd victory in 2014, but more importantly closed to within 12'10'' of general standings leader, Nani Roma.

Announced as one of the key stages on this 36th edition, the 422-km long 9th special stage between Calama and Iquique especially allowed Marc Coma to gain even more psychological superiority over the rest of the field. The third to start this morning, behind Barreda and Despres, the Catalan three times winner soon caught up with his adversaries to ride the stage in their company, demonstrating his control of the race. In the end, Coma won his second stage in 2014 and his 23rd on the Dakar, 1’21’’ ahead of his countryman and second placed rider in the general standings, Joan Barreda, and 5’28’’ in front of Cyril Despres, the title holder, who was slowed at the end of the special stage by the fear of running out of petrol in the dunes, forced to keep an eye on his consumption.

Behind the top 3, the day was again marked by the problems of Alain Duclos, this time betrayed by a valve on his Sherco and obliged to be towed to the bivouac behind his team-mate Francisco Errazuriz. The Franco-Malian therefore loses all hopes of a good result in the general standings, the summit of which is still just as serenely occupied by Marc Coma, who increases his lead over Joan Barreda to 40’19’’. The icing on the cake for the Catalan is that the misfortunes of Duclos allow his water carrier Jordi Viladoms, sixth today, to enjoy a little more breathing space in third position in the general standings with a lead of 28’21’’ over the consistently regular Chilean Jeremias Israel Esquerre. Engaged in a frantic climb up the general standings, Cyril Despres gained another place today and is currently in 8th position, but sill almost 2 hours and 30 minutes from leader Marc Coma. Finally, a special mention should go to Laia Sanz, the leading lady in the general standings, who recorded a fantastic 9th best time of the day.

In the quad category, the day took an unusual turn for the leader of the general standings, Ignacio Casale, who was forced to stop after 177 km for a puncture which took a long time to repair. In the close struggle involving Lafuente, Sonik and the young Chilean, Casale saw his lead in the general standings melt away in the face of the quick pace imposed at the front of the race by Sebastian Husseini, who won the stage in the end at Iquique. However, in the mean-time, Casale had managed to get the bit back between his teeth to keep alive the ambition of being the first Chilean to win a Dakar. Having made a dazzling comeback, Casale finished second, 24’58’’ behind Husseini, thus maintaining the gap over Lafuente and Sonik, even managing to gain more time on them in the general standings, where they trail him by 22'34'' and 46'28'' respectively. A grandstand show on the road to Valparaiso.

In the car race, since the bikes and quads had churned up the tracks and significantly increased the presence of fesh-fesh on the first part of the special, setting off from the front of the pack was a considerable advantage. Whilst Nasser Al-Attiyah could not fully benefit due to opening the way for the cars, behind him Stéphane Peterhansel put in one of the finest attacking performances on a special in his whole career. Despite tricky navigation in the final dunes due to the presence of several way points to be found, the title holder grabbed his 3rd stage victory in 2014, 2'17'' ahead of the Qatari, and the 64th of his career, making him the competitor with the most number of scratch victories on the Dakar, one ahead of Vladimir Chagin. However, far from this record, it was a much more specific objective that “Mister Dakar" set himself: reducing the gap with the leader of the general standings, Nani Roma. Only third today, the Catalan, who started sixth this morning, suffered from the dust of the first competitors and the roughed up terrain, losing time again to the tune of 11'36''. As a result, in the general standings, the winner of the bike category in 2004 only has a lead of 12'10'' over the record holder for titles won and now stage victories.

Behind the fight between the leading duo, the day was marked by the technical problems endured by Carlos Sainz, who broke a suspension arm after 195 km and had to re-join the bivouac in Iquique at a snail’s pace. It also witnessed a struggle for the third step on the podium between Orlando Terranova and Giniel De Villiers. The Argentinean, despite a puncture, enjoyed the better of the day, thanks to two punctures and also navigation problems for his South African rival. The outcome is a gain of 8'43'' for ‘Orly’ who climbs back into third place in the general standings, 5'13'' ahead of De Villiers… as for Al-Attiyah, he is joint fifth, 59'46'' behind leader Nani Roma.

Lastly, in the truck race, the leader also came under attack from his pursuers. A second consecutive stage win went to Andrey Karginov who attacked all day to pick up his 8th victory on the Dakar, 19'07'' ahead of Gerard De Rooy and 28'47'' in front of title holder Eduard Nikolaev. On especially rough terrain at the start of the stage, De Rooy preferred to look after his machine and take his foot of the gas a little, but got stuck in the sand in the final dunes. Nonetheless, this was not a drama for the Dutchman who is still leader of the general standings, now 13'28 ahead of Karginov and 1:21'41'' in front of Nikolaev.