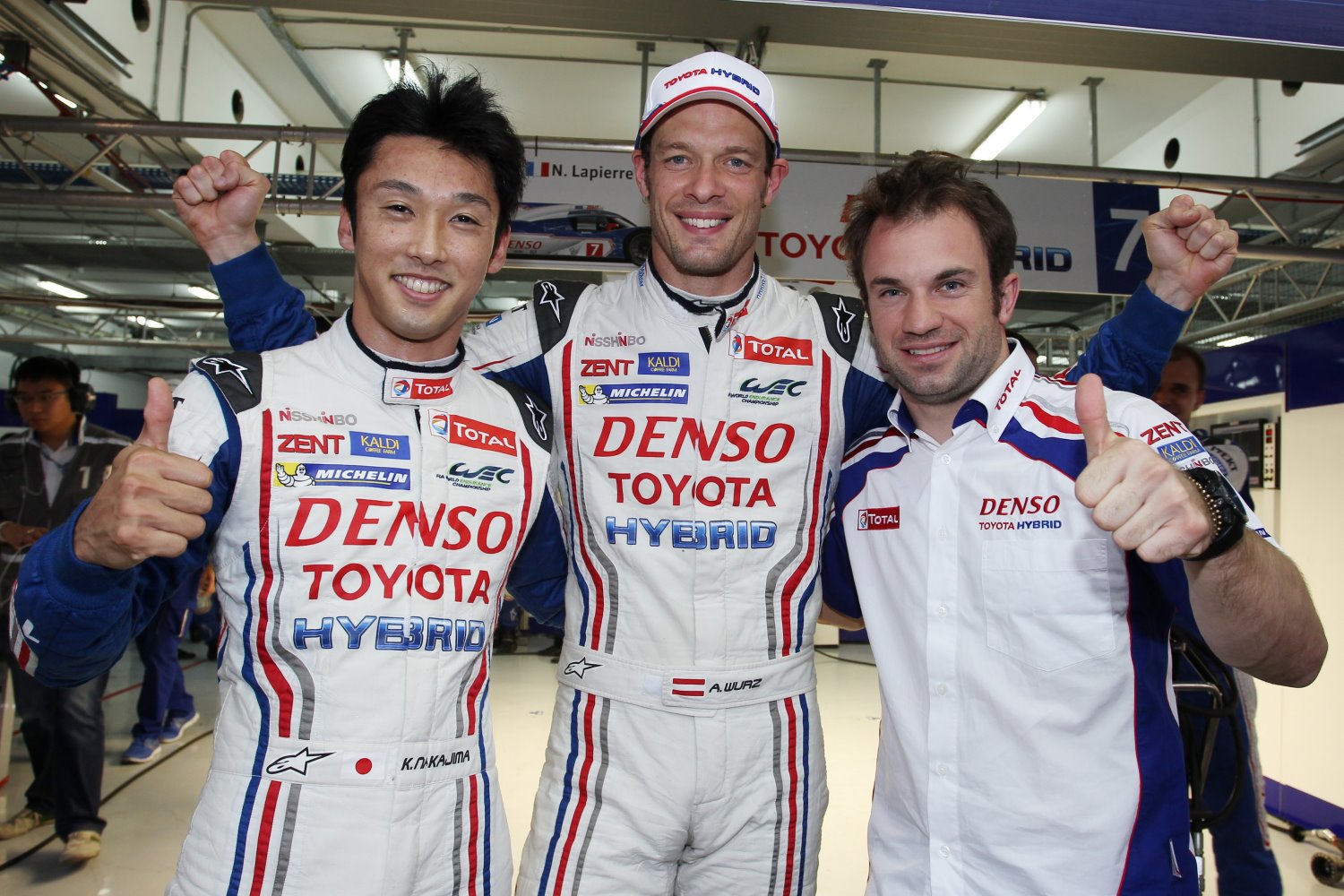 TOYOTA Racing locked out the front row of the grid in qualifying for the Six Hours of Bahrain, the final round of the 2013 FIA World Endurance Championship.

The #7 of Alex Wurz, Nicolas Lapierre and Kazuki Nakajima took pole position and will be joined on the front row by the second-placed #8 of Anthony Davidson, Sebastien Buemi and Stephane Sarrazin.

This season’s qualifying format requires two drivers from each car to set a minimum of two flying laps each. The grid is decided by the combined average of each driver’s fastest two laps.

In fading light, Alex and Stephane took the first stint, each setting two flying laps to put both cars in contention for the team’s third pole of the season. Alex’s second lap proved to be the fastest time of the weekend so far and the fastest LMP1 lap ever at Bahrain International Circuit.

Kazuki took over the #7 and kept up the pace to claim that honor with his two laps, while Anthony earned second; the team’s second one-two in qualifying after it locked out the front row in the opening race at a wet Silverstone.

The nearest Audi, the No. 1 entry qualified by Marcel Fassler and Andre Lotterer, was more than a half-second behind in third.

“We played our cards very well in the morning," Wurz said. “We didn’t show [everything] and then attacked with a really nice, consistent car. It was super good for the three of us… I’m very happy."

Earlier in the day, final practice took place in sunshine after the morning fog had dissipated.

The team concentrated on fine-tuning the car ahead of qualifying, with Stephane setting the quickest time for a TS030 HYBRID for second overall in the #8. The sister car ended the session fourth courtesy of Alex’s fastest lap.

Alex Wurz: “I am very happy with our performance in qualifying. Actually after the morning session I thought it would be tough to get pole after seeing the lap times of our competitor. But we played our cards very well and in the end we leave with a smile. We attacked in qualifying, the car set-up felt good and the team did a good job. But it’s only 1% of the job done; the race is six hours compared to six minutes of qualifying. Now we want to do the job in the race."

Kazuki Nakajima: “It was a really good qualifying for us. We had different tires compared to what I’d used in the morning and I had a really good feeling. I think the team did a great job to set up the car and get the maximum out of it. They also got me on track at the right moment, without any traffic, so everything was perfect. Alex’s lap was fast and it looks like we are in a competitive position for the race. The first job is done, now we have six hours of racing to go."

Anthony Davidson: “Today was a really good day. We didn’t expect to be as quick as we were to be honest. To be first and second on the grid is fantastic and it’s the first time we have achieved this in the dry this year. Hopefully we will have even strong pace in tomorrow’s race. It looks like we had slightly better degradation on the tires in the second part of qualifying compared to our competitors which looks promising. But it is a long race and we have to take it as it comes."

Stephane Sarrazin: “It was a good session. On my first lap I was a bit too cautious because it was my first time with this combination of set-up and tires. I didn’t want to take any risks so I didn’t over-drive. On the second lap I improved; it was quite good. The target was first and second for the team, and we are first and second. I would prefer the #8 to be first, but the race is still to come. The whole team did a great job; Anthony’s laps were great and in the #7 Alex and Kazuki were very fast. It is a good day for all the team."