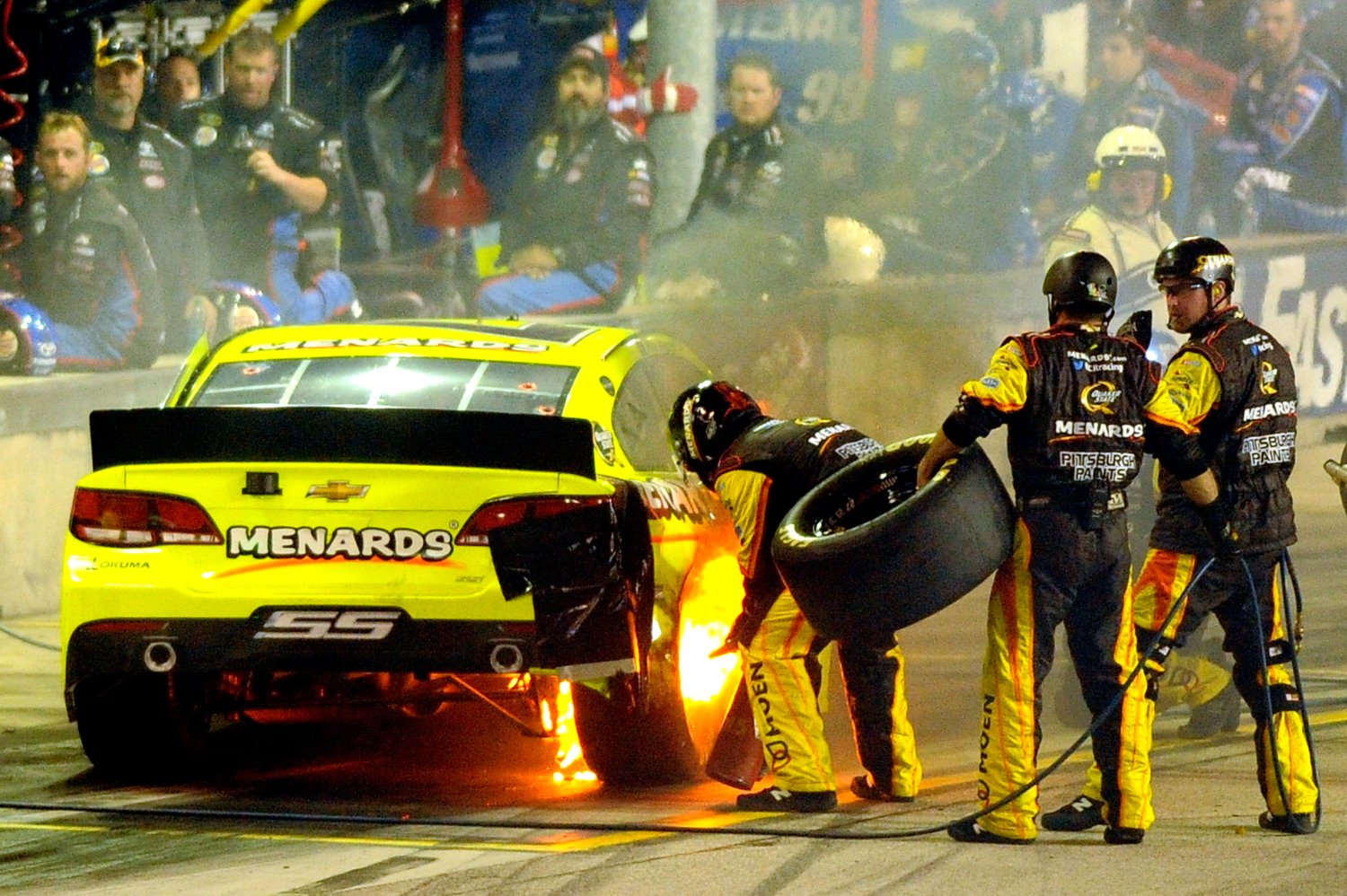 A day after a scary explosion on pit road at Homestead-Miami Speedway, team owner Richard Childress and NASCAR Vice President of Competition Robin Pemberton were still curious about the cause of the fiery incident.

RCR driver Paul Menard had a fire underneath the right rear of his car from a piece of tire rubber that had caught fire. That’s not unusual, and in most instances the team takes the tire off and the tire changer removes the stray rubber that’s on fire and changes the tire as normal.

But the fire grew too intense for Menard's tire changer and suddenly the tire exploded after building up pressure from the heat. Luckily, no one was injured.

“It blew the whole hub, the brake rotor, everything off of it," Childress said Monday. “It didn’t just blow a tire and that’s why we’ve got to find out, why it blew everything off the car.

“It was more of an explosion inside, I think. All of us are guessing now until we go back and look and see really what happened."

Rear tire changer Aaron Smith told The Miami Herald that he moved away from the wheel just before the explosion because the heat was so intense. He figured it would be better for the firefighters to just put out the blaze.

“I’m fine, but if I had been in front of (the wheel) like I normally am, it would have killed me," Smith said. “It blew the axle out, the hub off, everything.

“It about blew the glasses off my face."

Paul Menard (NASCAR Media)Childress said part of a tire that previously was flat was wrapped around the rear housing of the car. He said pit crews are prepared for a fire resulting from burning rubber underneath the car.

“They had no idea that it would catch on fire, they thought it would just stay back there," Childress said. “When it caught on fire, he came in that next lap. (The crew) went running out there with fire extinguishers and one was going to pull (the tire) off and they were going to put it out.

“When it stopped was when it blew. We were just lucky everybody wasn’t down there pulling the tire off or jacking it up."

Childress and Pemberton said they had never seen anything quite like that in their lives.

“There apparently was the extra problem with a tire (piece) that was left on there and it could have wore through a brake line or broke something like that and that helped fuel the fire," Pemberton said. “It’s a very rare occasion.

“I’m glad nobody was hurt. I’m sure everybody’s ears was ringing. We heard it pretty good up in the tower. There’s not much you can do about it. That’s called an ‘accident,’ but everybody learns from any of that stuff that happens."

Pemberton and Childress talked Monday about what happened and will continue to investigate the incident.

“We’re going to back and we’re going to really dissect it and find out really what happened," Childress said. “It caught on fire on the racetrack and built a lot of heat, a tremendous amount of heat, kind of like holding a blow torch on it with the wind blowing under the car and everything. … Just when you think you’ve seen it all, you’ll see something new in this sport."

11/18/13
Even through the glass windows of the luxury suites at Homestead-Miami Speedway, the loud blast sounded like the explosion of an artillery shell. In reality, what happened on Lap 232 of Sunday's Ford EcoBoost 400 NASCAR Sprint Cup Series race was the detonation on the right rear tire on Paul Menard's No. 27 Menard's Chevy. The force of the explosion blew the entire wheel assembly off the car and engulfed the crew in black smoke. The trouble for Menard began with a Lap 194 restart, when the outside line stalled. Menard rammed series champion Jimmie Johnson and in turn was hit from behind, sustaining damage to the rear of his car. "On that restart, everybody kind of checked up, and we got some right rear damage and had a flat tire," Menard explained.

"I guess a bunch of rubber got wrapped up underneath around the axle. Came in a couple of times trying to fix the damage and try to get the rubber off. We didn't get it all, and I guess it just caught fire. I didn't really know it until there was a little bit of a spark coming in the car and landed on the window net; thought that was kind of weird. About a lap later they said I was on fire; I lost my brakes, then the damn wheel blew right off." Menard was unhurt, and several of his crew members narrowly escaped injury from the flying wheel, but the car was done for the night. NASCAR Wire Service