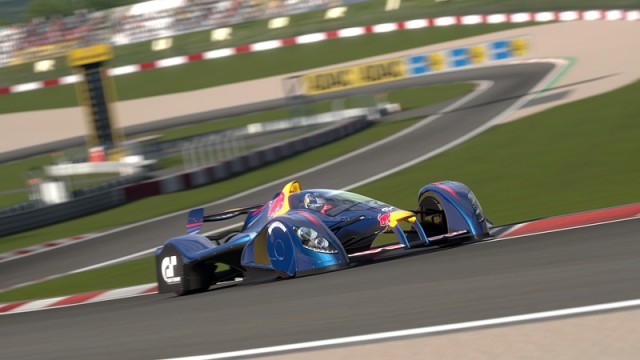 [Editor's Note: Watch the last segment of the video. Everything an IndyCar should be but isn't.] Initially the X1 Prototype was a single-seater canopied prototype wing car with covered front wheels. Powered by a 1500ps direct-injection V6 Twin Turbo, on paper the performance would have been spectacular, producing a top speed of 400km/h (248.6mp/h) and a maximum lateral acceleration of 6G. But once Red Bull Racing was brought on board to be a partner, the X1 really took off.

Adrian Newey, master aerodynamic engineer and Red Bull Racing's chief technical officer, suggested "Fan Car" technology, a long-held dream of his, be added to the design of the X1 Prototype. A "fan car" is a vehicle having a fan mechanism which forces the air out from underneath the car to reduce air pressure under the car's floor. The resulting suction draws the car to the ground surface and creates a massive amount of downforce.

And because it can create downforce regardless of the vehicle's current speed, it dramatically raises it's cornering speed capability even in low speed corners. Thanks to the insight of Mr. Newey, the X1 Prototype design was transformed. A large fan was added to the rear end of the body to implement the Fan Car technology.

Plus, Newey provided additional input into the design of the front and rear wings and rear diffuser, dramatically refining the vehicle's aerodynamics. As a result, the virtual X1 Prototype was able to achieve an astonishing level of performance. Its new top speed was 450km/h (279.6mp/h), with a maximum lateral acceleration reaching up to 8.75G, pushing the vehicle to the very limits of what a normal human body can withstand.