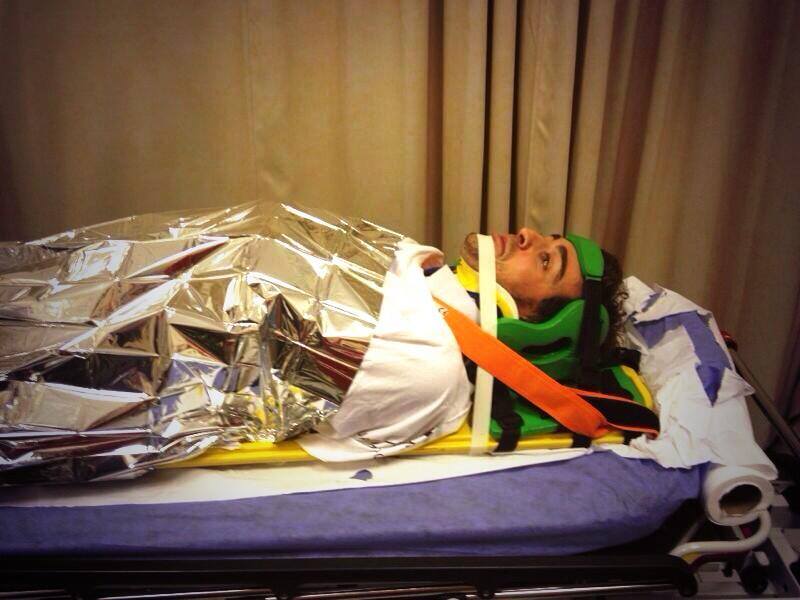 UPDATE Alonso has sent a message via Facebook: Hello! Thanks for all the support messages! The night was so so, I will do more tests this afternoon and try to be 100% as soon as possible!

Kobayashi apologizes for smoking
(GMM) Kamui Kobayashi has apologized after photographs emerged of him smoking a cigarette.

The former Toyota and Sauber driver, who is hoping to return to the grid, now races GT sports cars for Ferrari.

But his bid to return to the F1 grid was dealt a blow when the popular Japanese gossip magazine 'Friday' published photos of him walking on a street at night with an unidentified beauty and a cigarette.

Kobayashi, 27, admitted that his behavior was "inappropriate for a sportsman".

"I sincerely apologize to those who gave me your support and all of my fans who were concerned," he is quoted as saying.

Kobayashi admitted that smoking was "a very thoughtless act" for someone "working towards returning to F1".

"I guarantee that this situation will not happen again," he promised.

Newey reveals he turned down Ferrari offer
(GMM) Adrian Newey has admitted he once came close to agreeing to work for Ferrari.

The future of the renowned Red Bull designer is currently the subject of hot speculation, amid news he met with Ben Ainslie in Abu Dhabi at the weekend.

British sailor Ainslie is putting together a British team for an America's Cup bid, and Newey has admitted he is interested in competitive yacht design.

"He (Newey) would be amazing," Ainslie told BBC radio 2, confirming that Newey's "design experience would be crucial".

For now, the 54-year-old is committed to helping Red Bull win a fifth consecutive world championship next year for the all-new turbo V6 rules.

And he told Italian television Sky: "Years ago I had the opportunity to go to Ferrari, but I had small children at school (in Britain) and so it was not an easy decision.

"But I think that being part of Ferrari, as an engineer, is the same sort of dream as it is for a driver. Unfortunately it never really came to fruition.

"I believe that Red Bull will be my last team, but to leave and start from scratch would not be so tragic," La Gazzetta dello Sport quotes Newey as saying.

It was believed the Silverstone based team was not an option for the German, as he had annoyed supremo Vijay Mallya by deciding to leave for Sauber after just a single season together in 2012.

But as the 26-year-old looks desperately for a seat for 2014, it must be noted that Hulkenberg, his manager Werner Heinz, and Force India's sporting director Otmar Szafnauer were spotted deep in conversation at a table in the Abu Dhabi paddock.

According to Auto Motor und Sport, Hulkenberg dismissed the significance of the meeting on the basis that he has known Szafnauer "for a long time".

Force India, however, has a seat vacant for 2014, as Paul di Resta is increasingly nervous about his future.

"It's a bit of a nightmare," the Scot admitted in Abu Dhabi.

"Vijay and the other guys are giving off good signals about next season but I would like to know for sure," di Resta told BBC television.

While Sebastian Vettel has dominated at the wheel of Adrian Newey's cars in the current aerodynamically-fuelled era, the world of F1 will be shaken up next year as the all-new turbo V6 era begins.

Bild newspaper said F1 engine makers Mercedes, Ferrari and Renault have each had to invest at least EUR 100 million on the new engines.

But it emerges that while Mercedes has a staff of 400 working exclusively on the new V6, there are only 250 staff at work on the new Renault.

Red Bull's Dr Helmut Marko admitted that "It is possible that the others will have better ideas than we do" for the start of the new era.

And world champion Vettel admitted that, even in the current V8 era, Renault has played a big role in Red Bull's success.

"They're doing a very, very good job," he said in Abu Dhabi on Sunday, after matching Michael Schumacher's feat of seven grand prix wins on the trot.

"I hope that next year we will have an engine that's as powerful and as reliable as this year's," added Vettel.

Franz Tost, the boss of Red Bull's sister team Toro Rosso, admitted to Marca newspaper that he is concerned one engine marque could dominate in 2014.

Asked who he has in mind, the Austrian admitted: "Let's say Mercedes.

"If they start strong, the gap could last for a long time," said Tost.

A week ago in India, when the German wrapped up his fourth consecutive world title, FIA stewards issued a reprimand and EUR 25,000 fine after Vettel thrilled the fans with a smoky celebration.

"You are a naughty boy," former driver Martin Brundle told Vettel on the Abu Dhabi podium, after doing more donuts in Abu Dhabi.

"That's going to cost somebody some money."

Indeed, even Red Bull was worried about the consequences when engineer Guillaume 'Rocky' Rocquelin repeatedly warned Vettel not to do donuts on the slowing down lap.

Team boss Christian Horner replied immediately: "You can pay the fine for that one."

Actually, Vettel's donuts were not even investigated by the FIA, because he did them in a run-off area, and on the slowing-down lap.

"This time I brought the car back, so it's fine," Vettel smiled. "As you can see it's in parc ferme."

Indeed, even teammate Mark Webber did a couple of donuts.

"It's not great for the gearbox or the engine," Horner admitted, "but it's good for the drivers to let off steam and there are only two races left."

Alonso 'hopefully' fit for Austin after impact
(GMM) Fernando Alonso should be fit to race in Austin later this month, despite dramatic images of him in hospital emerging after Sunday's Abu Dhabi grand prix.

The photos depicted the Spaniard underneath a space blanket and wearing a neck brace, reportedly as the result of injuries sustained when he crashed over the curbs to avoid Jean-Eric Vergne's Toro Rosso on Sunday.

The stewards even investigated the incident because the Ferrari passed the Frenchman outside the limits of the track, but Alonso ultimately kept his fifth place.

"Hopefully I am ok for Austin," Alonso told reporters.

"I still have all my teeth," he smiled, "but my back is obviously in pain a little bit because it was a big hit."

"I expected to see the soft tires on the car (after a pitstop) and I saw the others," he said.

"Without this problem I would have finished easily in the top five."

Peter Sauber to return to paddock in 2014
(GMM) Peter Sauber should return to the F1 paddock next year, following some minor health problems in 2013.

That is the news of the Swiss team's team boss Monisha Kaltenborn, who was asked by the Russian website f1news.ru to explain the recent absence of the Sauber founder.

"There have been a few small problems, he has some difficulty with walking, but generally he is fine.

"He is not planning any more visits to the races this year," added Kaltenborn, referring to Peter Sauber, who is 70.

"But next year, I think he will definitely come back to the paddock."

Sir Frank Williams plans 'to contact' Brawn
(GMM) A few days ago, deputy boss Claire Williams said the Oxfordshire based team has had "no conversations" with Ross Brawn.

But her father – the team's famous founder, principal and majority owner Sir Frank Williams – has now revealed that talks with Brawn may in fact take place.

Brawn's future is currently the subject of hot speculation, as he could step down as Mercedes' team boss at the end of the year.

Team chairman Niki Lauda has said he wants to keep the 58-year-old at Brackley, but Williams has now revealed he may launch a bid to lure Brawn to Grove.

Brawn began his F1 career in the 70s when Sir Frank Williams gave him a job as a machinist.

"When he was with us he was really extraordinarily clever in terms of engineering — he is very gifted," Frank Williams told the British broadcaster Sky.

"I am sure he has accumulated infinitely more knowledge … so if he was to come he would be a great addition.

"I wasn't aware he was available. I may now have to contact him. I can say no more," he added.

"The reason I am being hesitant is that I do employ people already and it is very unlikely that we could afford Ross, or that he would want to come to us, so all I would be doing if we didn't get him would be offending everyone at the team already," said Williams.