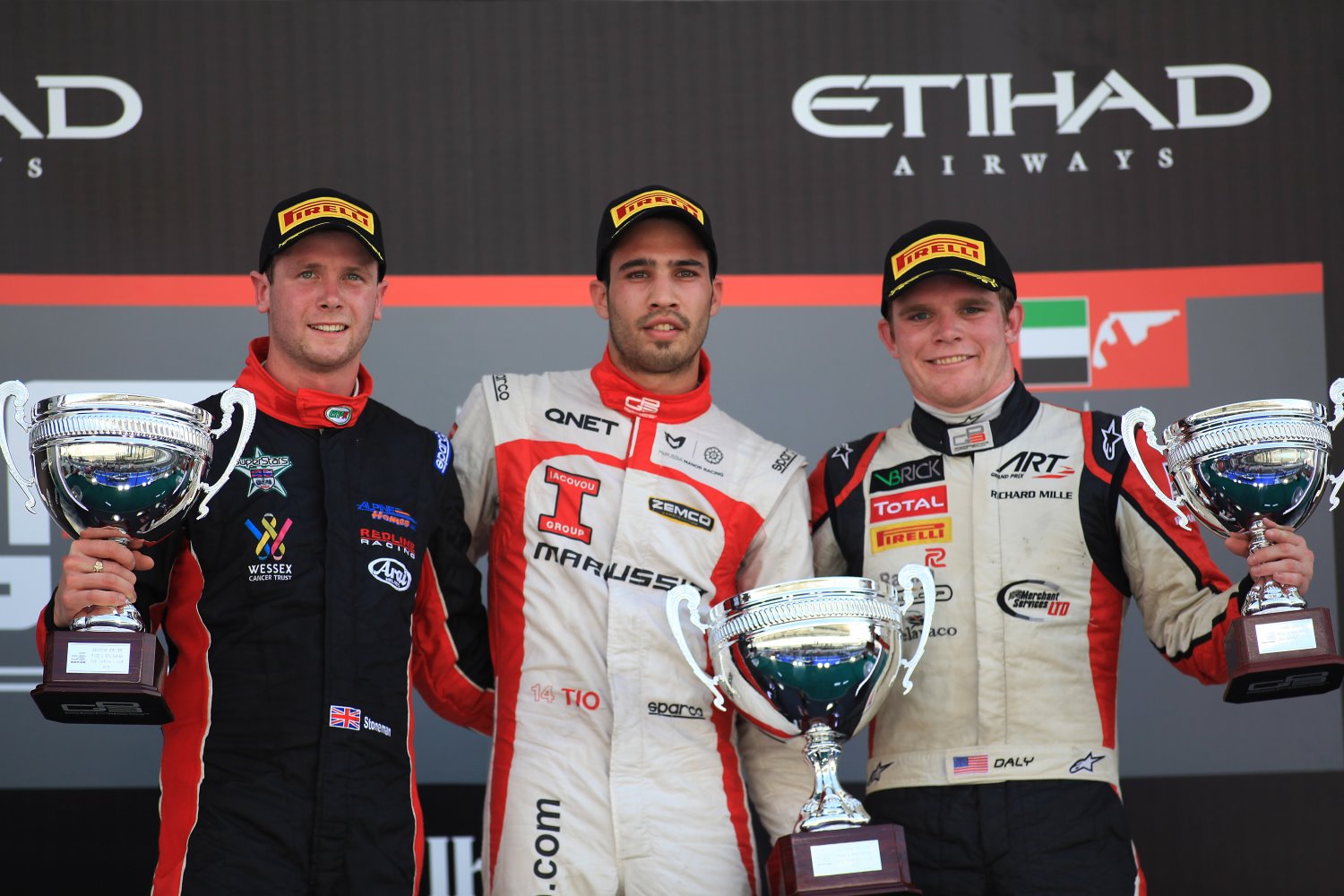 He started the season with a win and he ends the year on the top step of the podium – that’s the story of Tio Ellinas’ 2013 with Marussia Manor Racing. After making a great start from P2, the Cypriot stormed into the lead and took the checkered flag ahead of Koiranen GP rookie Dean Stoneman who in his maiden GP3 weekend, achieved a remarkable podium. ART Grand Prix’s Conor Daly was third.

Patrick Kujala started from reverse pole but it was the experienced Ellinas who made the better getaway and stole P1. Stoneman moved into second with Daly in third, whilst Kujala dropped to fourth. Newly crowned GP3 Champion Daniil Kvyat made up one place to P7 as he attempted to carve his way through the field.

Jack Harvey wasted no time in passing Kujala whilst all eyes were on the battle between Carlin’s Nick Yelloly who had his hands full keeping the Russian champion behind him. On lap three, the MW Arden driver found his way through past the Brit and set his sights on his next prey. After three laps Ellinas managed a three second advantage back to Stoneman and Daly.

On lap 5, Kvyat overtook Kujala and his next target was the ART Grand Prix duo. Yelloly and Alexander Sims began to hunt down Finnish rookie Kujala as a train of six 6 cars joined in the fun. The Carlin pair got the better off the Koiranen GP driver and soon began setting purple sectors.

Meanwhile the top five began to really close up and with two laps to go it was all to play for with Ellinas’ lead reduced to under a second. Harvey could see a chance for the rostrum and tried everything to pass his teammate Daly on the final lap but it wasn’t enough. Ellinas crossed the line and punched the air with joy to take his third GP3 career win, just two tenths ahead of Stoneman with Daly securing the final spot on the rostrum. Harvey held off a chasing Kyat for P4, with Yelloly, Sims and Zamparelli completing the points scorers.

2013 GP3 Series Champion Kvyat finished the season with a tally of 168 points, with Argentine Facu Regalia second in the standings on 138 after a no score today. Third place trophy will go to American Daly on 126 with Ellinas and Harvey on 116 and 114 rounding out the top five.

ART Grand Prix who celebrated their triumph yesterday of four consecutive team champions’ trophies, finished the season with 378 points, with MW Arden and Koiranen GP on 278 and 207 apiece.

The season is now over and what a memorable year it has been! The reigning GP3 Champion will graduate to F1 with Scuderia Toro Rosso, again showing the competiveness of the Series, we look forward to another thrilling GP3 Series in 2014.