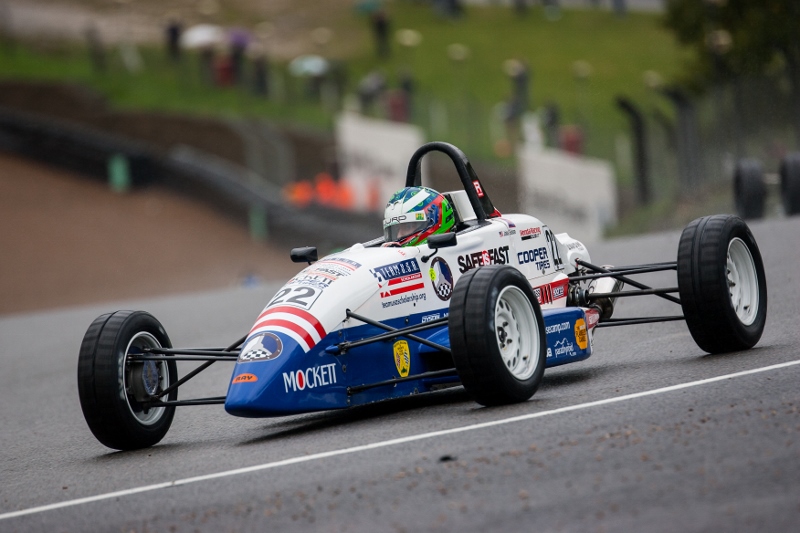 West Kingsdown, England – Wow, what a day! Brands Hatch lived up to its reputation for changeable weather on Day One of the 42nd annual Formula Ford Festival, but Team USA Scholarship drivers Joey Bickers and Jake Eidson took them in their stride as they finished second and first in their respective heat races.

“I couldn’t be more proud of how Joey and Jake handled the day," said Team USA Scholarship founder Jeremy Shaw. “The conditions were fluctuating throughout the day and both youngsters were faced with various curve-balls, but they handled them magnificently."

Qualifying took place this morning with Bickers, 21, from Moorpark, Calif., drawn in Heat One and Eidson, 18, from Littleton, Colo., in Heat Two. Light rain began to fall midway through the first 15-minute session during which Bickers posted the fifth fastest time behind English veteran Joey Foster, Irish youngster Niall Murray and the two Team Canada entries for Zacharie Robichon and Scott Hargrove who, in common with Team USA, were also fielded by the Cliff Dempsey Racing team. A couple of hours later, Eidson was third fastest in qualifying for Heat Two, which was held on a virtually dry track, behind Northern Irish veterans Wayne Boyd and Jonny McMullan, but was later assessed a five-place grid penalty for failing to respect the track limits.

The track was fully wet again by the time the first 12-lap Heat race began at a little after 2:20 pm, whereupon Foster sped away immediately into the lead and was never seriously challenged. Behind, after making his very first standing start and competing for the first time ever in the rain, Bickers made a fine getaway from the grid to leapfrog ahead of Robichon at the first corner. Hargrove, who recently clinched this year’s Cooper Tires USF2000 Championship Powered by Mazda, found a way past Murray on Lap 5 but made an error at the notorious Paddock Hill Bend on the following lap which enabled Bickers to slip through into third. Then, on Lap 10, Bickers executed a bold pass on the entrance to Clearways. Murray attempted to hold his ground on the outside line but it was he who came off worst when the two protagonists briefly made contact, and Bickers was through into second place.

“My goal for the race was just to make up as many positions as I could," said Bickers (right). “I got a good start and got past Zach and I was just trying to hold pace with the leaders because I knew that if I just hung with them I would maybe get a chance to get by them one by one. I’ve never raced in the rain before so I didn’t know what passing would be like but I thought, just run as smooth as I could and try not to go off the track. I ended up in second so I couldn’t really be happier."

Heat Two provided more typically fraught action. Boyd made a fine start from the pole but threw away his advantage by sliding wide onto the grass at Graham Hill Bend on Lap 1 and falling far back into the pack. Eidson, by contrast, picked up two positions on the opening lap, one more on Lap 2, then two more on Lap 3. He passed Oliver White for second place stylishly at Clearways on Lap 4, then quickly closed in on race leader Stephen Daly, who also made a brilliant charge at the beginning to vault all the way from seventh on the grid. Daly, though, was unable to hold off an inspired Eidson, who executed a stunning outside pass at Clearways before romping clear to the victory.

“I was a bit upset after qualifying but I knew I was just as fast as the leaders so I knew I was in good shape for the race," related Eidson. “Starting P8 didn’t bum me out too much and I just wanted to focus on the race.

“I knew that if someone was going slower in front of me I’d do my best to pass them. The start went OK. I think I made up one position; I just wanted to make it through Turn One without any problems. I got a few cars in the first couple of laps, and as I was working my way forward, it started to get a bit more difficult. They were defending a lot but I had to muscle my way through them, and my pass for the lead was pretty exciting. There was a bit of over-under maneuvering but I was fortunate to be able to make the pass and win the race, so it’s been a good first day."

Today’s results mean that the Team USA drivers will line up alongside each other on the front row of the grid for tomorrow morning’s second Semi Final race which will comprise 15 laps and is slated to start at 11:30 am, with Eidson on the pole and Bickers alongside. The top 14 finishers from each of the two Semi Final races will comprise the grid for the 20-lap Grand Final which is due to start at 4:35 pm