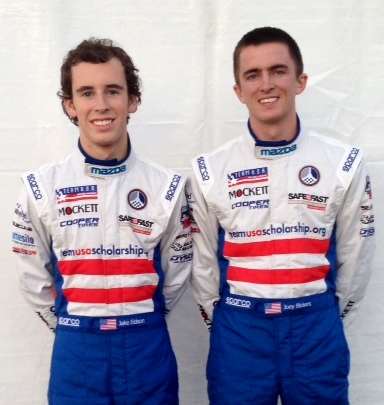 Team USA Scholarship drivers Jake Eidson and Joey Bickers have completed their testing program and are primed and prepared for this weekend’s Formula Ford Festival event at the legendary Brands Hatch circuit in England.

The talented young Americans have continued their preparations this week with three days of testing on the short but challenging 1.2-mile road course aboard their pair of Ray Formula Ford cars fielded by Cliff Dempsey Racing. Eidson, 18, from Littleton, Colo., has been among the pacesetters all week in both wet and dry conditions, while Bickers, 21, from Moorpark, Calif., surprised even himself this morning by unofficially posting the fastest time in the wet.

“I’ve been a bit quicker than I thought in the wet, because I’ve never run in the wet before," declared Bickers, who is in his very first season of racing and learned this week that he has been selected as one of the finalists in the Mazda Club Racing Shootout which will be held next month in California. “I’ve been struggling a little bit in the dry but I’ve been working a lot with Cliff to get on the pace with the leaders. Jake’s done a really good job and I’ve been looking at his data and learning a lot from him. The conditions, obviously, can change pretty quickly but I’m pretty confident in the wet and I think I know what I need to do to improve in the dry so either way I’m looking forward to tomorrow. The level of competition is pretty high. I know there’s at least 10 people here who can win. I’m just privileged to be out here and I want to make the most of the opportunity."

“Testing has gone great so far," added Eidson (pronounced “Edd-son"). “We’ve had a lot of experience both in the wet and the dry, so I think we have the car and the track nailed pretty good. I’ve been learning a few things from Joey in the wet because even though he wasn’t expecting too much he was pretty fast in the wet. It’s pretty cool how we’ve been able to learn from each other in the dry and the wet, so that’s been really beneficial. I think we’ve been right there in (lap) times so I hope we’ll be right there battling for the win."

The Americans have been drawn in separate heat races which will be used to whittle down the field of 50 drivers to a pair of Semi Final races on Sunday morning and, ultimately, a field of 28 which will contest the Grand Final on Sunday afternoon. Bickers will contest Heat One, qualifying at 9:30 am on Saturday with his 12-lap race due to start at 2:05 pm. Eidson has been drawn in Heat Two for which qualifying will take place at 11:30 am, followed by the race at 3:00 pm.

Live timing and scoring for all on-track activities will be available via TSL-timing.com.