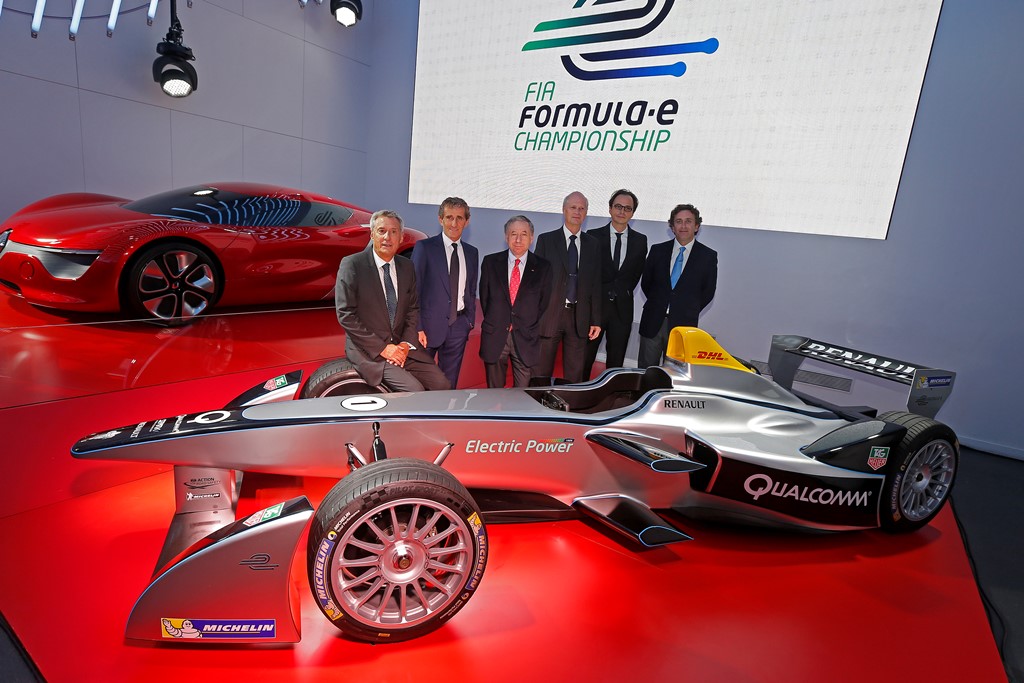 The new team launch, held at the L'Atelier Renault on the Champs-Elysées in Paris, was attended by racing legend Alain Prost and Jean-Paul Driot, together with FIA President Jean Todt and Alejandro Agag, CEO of series promoters Formula E Holdings.

Dams now becomes the fifth team to sign an agreement with Formula E Holdings to compete in the new fully-electric race series which begins in September 2014 and features 10 races through the heart of some of the world’s leading cities. e.dams joins leading IndyCar outfits Andretti Autosport and Dragon Racing, UK-based Drayson Racing and Chinese team China Racing as one of the 10 teams to be put forward to the FIA for final approval by its World Motor Sport Council.

With four F1 titles (1985 & 86, 1989 & 1993), 51 GP victories and 108 podiums to his name, Alain Prost remains one of the sport’s most successful racing drivers with the Frenchman very much looking forward to being a part of the new zero emission series: “I am very happy to be a part of the Formula E adventure. Being able to actively participate in the development of this new technology, which is 100% electric is extremely motivating. As we’ve seen in other championships, 2014 will see a move towards more sustainable racing, proving more than ever that motorsport is the benchmark for the future."

“Getting involved with the FIA Formula E Championship was an obvious choice", added Jean-Paul. “Being the race enthusiast that I am, I was immediately convinced by this new concept of using fully electric single-seater cars and believe it will shape the future of motorsport. The implementation of new technologies, in the heart of the most beautiful cities in the world and in front of a young audience, lays the path for a new form of motorsport, which is innovative and respectful to the environment. I am extremely proud to be a part of this new challenge."

Alejandro Agag added: “It is a great honor for me to be welcoming Jean-Paul to the FIA Formula E Championship together with Alain Prost, one of the biggest worldwide names in motorsport. The experience, pedigree and track record of both Jean-Paul Driot and Alain Prost is unparalleled and I know e.dams is going to have a big impact on the series. It’s also fantastic to have such highly-established figures show their commitment to clean energy and sustainable mobility, and to join us in creating an electric future."

10/23/13 Four-time Formula One world champion Alain Prost is on the verge of making a return to racing as a team owner in the Formula E electric championship which begins next year.

Invitations have been sent out to guests for an event which will take place Oct. 24 and will be hosted by Prost, Formula E's chief executive Alejandro Agag and Jean Todt, president of motorsport's governing body the FIA. The invitation is titled “Official launch of new Formula E team" and it says the hosts “have the pleasure of inviting you to the official launch of the latest Formula E team."

Twelve years have passed since Prost last owned a team in a major motorsports series. In 1997, four years after retiring as an F1 driver, he bought the Ligier F1 team and became its team principal. The outfit was re-branded as Prost Grand Prix and its best result was a sixth-place championship finish in its debut year.

Prost GP closed its doors in 2001 after the breakdown of talks about selling it to Khaled bin Alwaleed, son of Prince Alwaleed, a Saudi Arabian billionaire who is one of the biggest single investors in blue chip businesses such as Apple, Citigroup and Disney.

Prost already has an association with Formula E as he is a brand ambassador of its technical partner, Renault. The launch event on Thursday will take place at Renault's flagship showroom in Paris and it will also be attended by Jean-Paul Driot, founder of French company Dams. Dams runs teams in the World Series by Renault, as well as F1's feeder series GP2 and its support series the Porsche Supercup.

A total of 10 teams are expected to join Formula E but only four have been announced officially so far. Lord Paul Drayson, the electric land-speed record-holder, will enter a team from a base in England. Another will be run by Chinese motorsport boss Yu Liu, and two will join from IndyCar: Andretti Autosport and Dragon Racing.

The teams have been attracted by a $3.3-million annual cap on team budgets. In contrast, F1 has no cap with annual budgets reaching an average of around $200 million.