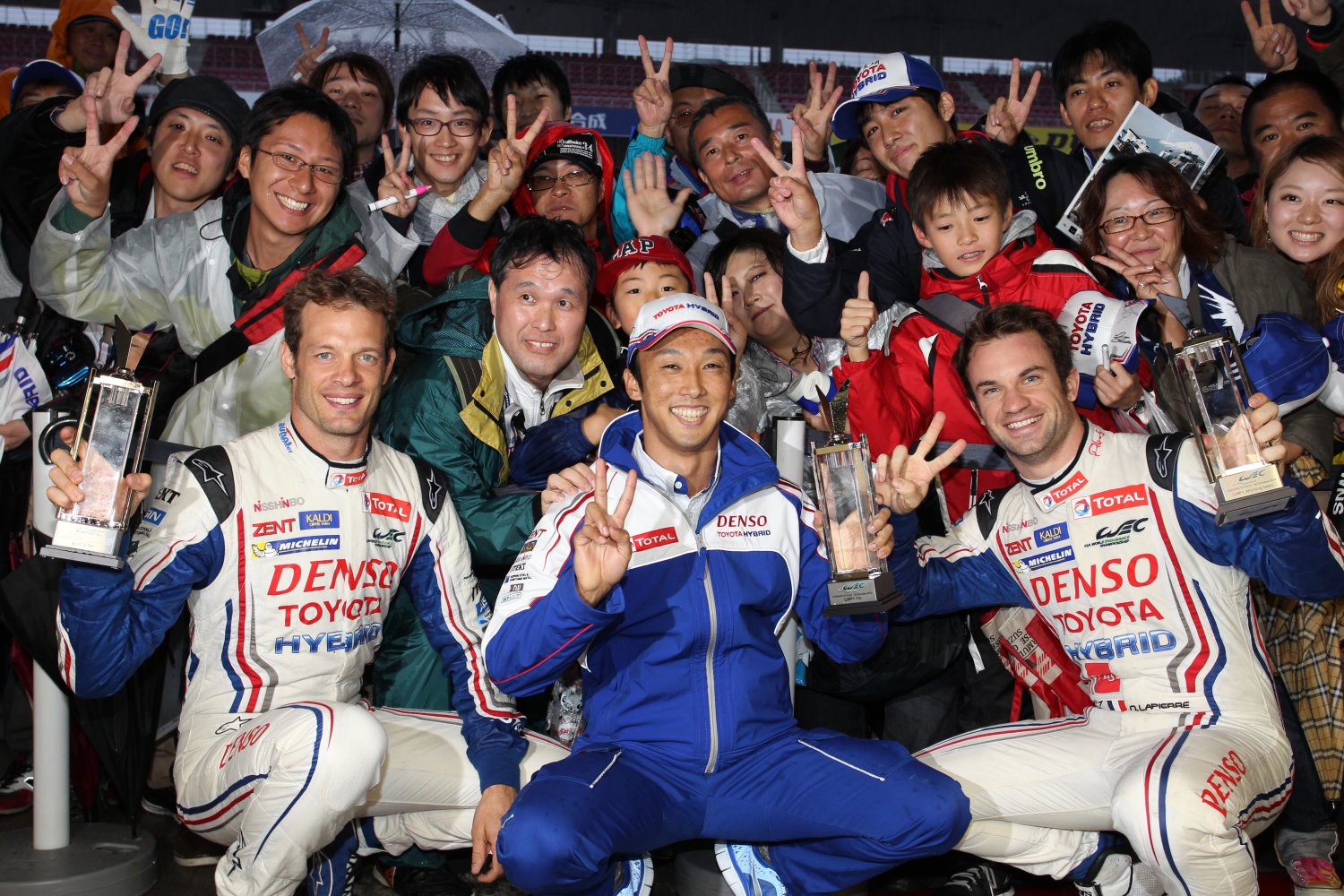 TOYOTA Racing was declared the winner of the Six Hours of Fuji after heavy rain prevented any real racing in the sixth round of the FIA World Endurance Championship.

Three short safety car periods in heavy rain were the only action for a large crowd, who saw the #7 TS030 HYBRID of Alex Wurz, Nicolas Lapierre and Kazuki Nakajima classified in first place on a frustrating day for all.

The weather denied the #8 of Anthony Davidson, Sebastien Buemi and Stephane Sarrazin any chance to improve its position after a pre-race delay and it finished 27th.

Having qualified second, the #8 refueled in the pit lane on its way to the grid after several sighting laps, but missed the pit lane exit window by five seconds.

Anthony was therefore forced to start from the pit lane, losing a lap as per the regulations while the race started behind the safety car due to continuous heavy rain.

After eight laps behind the safety car the race was red flagged and the cars waited on the starting grid.

Another 22 minutes behind the safety car preceded heavier rain and the red flag flew again, with Kazuki leading and Anthony 27th.

A final single lap behind the safety car ended the race with less than half distance completed, meaning Alex, Nicolas and Kazuki took home the winner’s trophy for the second consecutive year

The next round of the FIA World Endurance Championship, the penultimate race of the season, is the Six Hours of Shanghai on 9 November.

Alex Wurz: “Everyone is happy when Christmas arrives and today it came early for us. We all came here today wanting to see a good race and unfortunately that didn’t happen due to the weather. It is really disappointing for the fans but it was the right decision. The fans waited a long time but nobody wants to see anyone getting hurt. We race hard but we all have to respect nature and today there was nothing we could do."

Nicolas Lapierre: “I feel sad for the fans because they are the most disappointed people around here. A win is a win so we will take it, even though it was not achieved in the way we wanted. We had showed good pace earlier in the weekend and we didn’t make any mistakes. Obviously in Shanghai the team will try to get a better win but today we get the trophy and I’m happy for that."

Kazuki Nakajima: “More than anything I feel really sorry for the fans who came here to see us race. I’m not sure we can really call this a win but of course P1 means a lot to the team. The decisions were correct and the race director did the right thing. It was raining so heavily and the conditions were just terrible, especially just before the second red flag. Even driving behind the safety car was difficult. Maybe it looks easy because we are driving relatively slowly but with the spray and the aquaplaning it was really hard. Considering that we have different cars with different speeds in WEC, in these conditions it was the right choice to stop the race."

Anthony Davidson: “It was a very bizarre day here at Fuji. Obviously it’s very disappointing for the fans not to see a proper race. But it was good to see the team standing on the top step of the podium, for what it’s worth after a race like that. From our side of the garage it was incredibly frustrating not to make it out of the pit lane on time to get on the grid. I had to sit there and watch the red light come on as I trundled down the pit lane. We lost a lap straight away so it was not the best situation to be in. But that’s racing and these things happen."

Sebastien Buemi: “I have mixed feelings. Obviously I am happy for the team because we won the race, even if it was not in the nicest way. It is in Fuji as well so that is very good. I am very disappointed with what happened to us because obviously we would have won otherwise. But this is motorsport so we just need to look forward. Based on our performances in the dry I am sure the future will be bright. Let’s see what happens."

Stephane Sarrazin: “Toyota won today and that was the target. The way the race happened is really a pity. We had an amazing car which could have won the race properly; either TS030 HYBRID could win today in dry conditions. We showed in practice and qualifying that we were really fast and right with the Audis. It would have been a very strong race from the team. We didn’t have the chance to show that performance unfortunately but Toyota wins so we have to be happy."

Yoshiaki Kinoshita, Team President: “I am very sorry for the fans here at Fuji Speedway. They attended in their thousands and gave all teams such fantastic support, so it is really a pity that the weather meant they did not see a race. They were very patient, waiting for hours during the rain. We really wanted to show them a dry race between Toyota and Audi because we expected to have an exciting fight. But now we will focus on getting a real win in Shanghai. Today’s result confirmed Audi has won the Manufacturers’ World Championship and I would like to congratulate them on a great achievement. They have set a very high standard and can deservedly enjoy their celebrations."