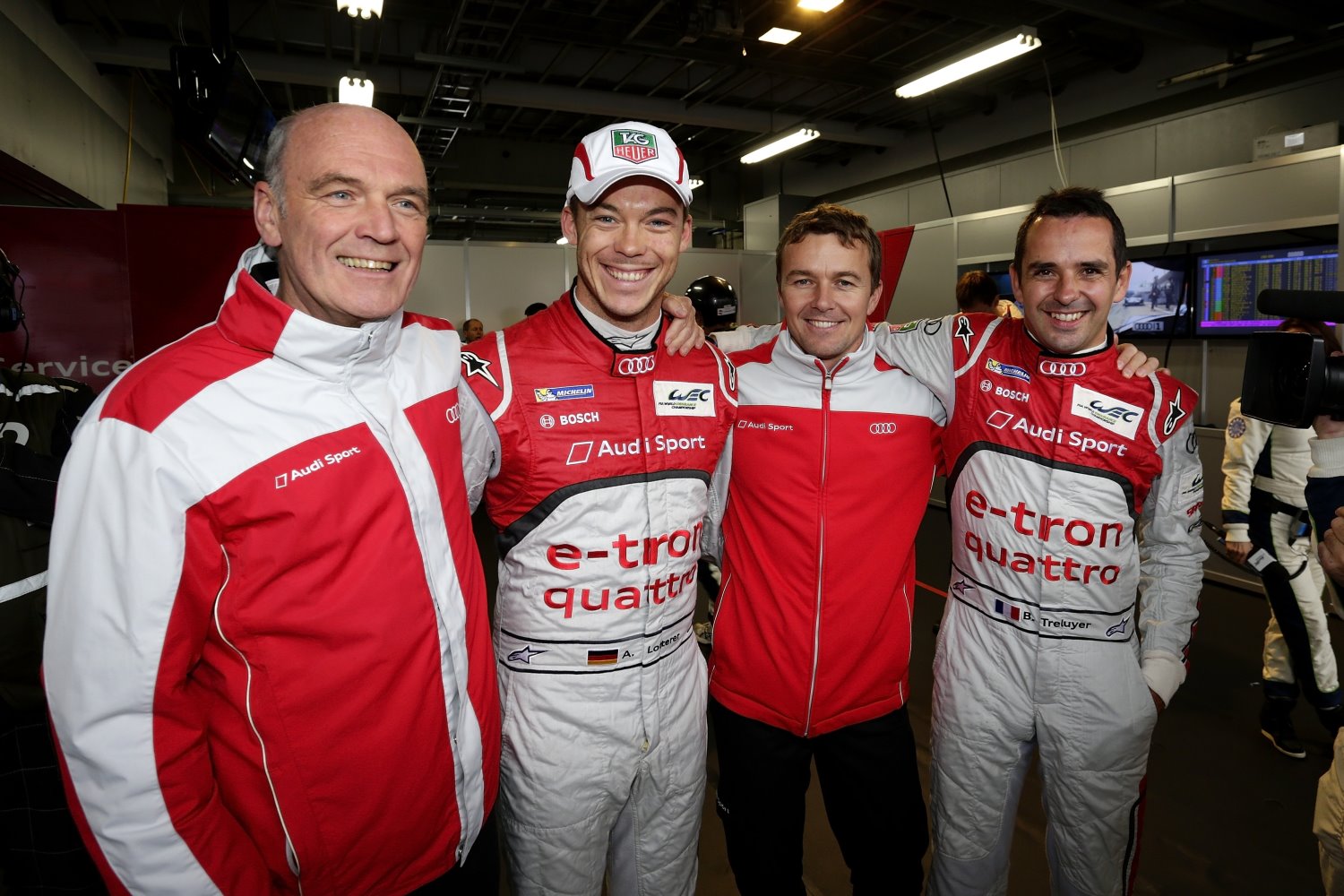 At round six of the FIA World Endurance Championship (WEC) in Japan, Audi achieved the fifth consecutive best time of the season with the Audi R18 e-tron quattro. As at Spa and SÃ£o Paulo, Marcel Fassler/Andre Lotterer/BenoÃ®t Treluyer managed to leap onto the top spot of the grid.

Car number ‘1’ made its mark immediately in the qualifying session at the foot of the snow-covered Mount Fuji. Andre Lotterer (D) started qualifying in the Audi R18 e-tron quattro with a lap time of 1m 26.481s and on his next outing posted a 1m 26.235 as the fastest time of the entire qualifying session. Consequently the German who lives in Tokyo clearly beat the existing qualifying lap record, 1.264 seconds slower set by Toyota driver Kazuki Nakajima 12 months ago. Lotterer subsequently turned his car over to BenoÃ®t Treluyer (F). The average of the four best laps from which the WEC qualifying result is calculated reflected a time of 1m 26.577s for the fastest Audi.

The sister car designated as number ‘2’ qualified for grid position four. Allan McNish (GB) and Loic Duval (F) shared driving duties and, on average, achieved a time of 1m 27.425s. Both drivers were less fortunate as they did not always find a clear lap. In addition, on the day before, the team had lost about an hour and a half of driving practice due to unscheduled repairs after a GT entrant had hit the race car of the Le Mans winners. Still, Duval/Kristensen/McNish can tackle the event on Sunday without pressure – as the leaders of the standings, they are starting the race with a 32-point advantage.

On Sunday, the teams can expect unpredictable weather at Fuji. The sixth of eight World Championship rounds will begin at 11:00 local time (4:00 CEST). The race can be watched by live streaming on the internet at www.audi-motorsport.com and on www.fiawec.com. In addition, an 85-minute TV broadcast on Eurosport will start in Germany at 8:35 on Sunday.

Dr. Wolfgang Ullrich (Head of Audi Motorsport): “Obviously, it’s great that we clinched pole here at Fuji even though it was very close. The guys in car number ‘1’ drove perfect laps. This cumulative team qualifying is something very special. Car number ‘2’ was a little less fortunate and its position was worse in traffic. That’s why the result wasn’t quite enough. But we all know that the qualifying result isn’t so important for the outcome of a six-hour race."

Chris Reinke (Head of LMP): “A pole position is always a perfect start into a race weekend. Our two Japan protagonists managed a brilliant performance. That’s a good starting base for the race. In the case of car number ’2’ we shouldn’t forget that a complete session was lost. ‘Well done’ to the team that reassembled the heavily damaged race car. The car was certainly within the range in qualifying but we’re still going to do some detailed analyzing and work on becoming faster."

Ralf Juttner (Technical Director Audi Sport Team Joest): “The qualifying result is nice and it was good to have clinched another Championship point for Audi. The two drivers who drove the qualifying session were very pleased. Their lap times were good – even faster than expected. But that was necessary, too, because the two Toyotas were trailing them closely. Car number ‘2’ is a little further behind. The drivers weren’t completely happy with the balance. We’ve still got to work on that for Sunday. But rows one and two on the grid are good starting bases."

Marcel Fassler (Audi R18 e-tron quattro #1): “Andre Lotterer and BenoÃ®t Treluyer have their home around here. That was a trump card because they know the track well and had an incredible run. They burned the times into the tarmac right on the first two laps. A qualifying session can’t go any better than this. Even though it was very close some of the time, we deserve the pole position. My two team-mates were really perfect today."

Andre Lotterer (Audi R18 e-tron quattro #1): “A superb result, everything was going perfectly. I managed it in just two laps and afterwards BenoÃ®t (Treluyer) was able to continue driving on relatively fresh tires. He was running perfectly. He had one lap for aiming and then was a real bombshell. The competition was strong and we’re happy to be in front of the two Toyota cars. For me, it’s a home round and a true highlight. Hopefully, things will continue this way in the race tomorrow."

Benoit Treluyer (Audi R18 e-tron quattro #1): “The whole team was great. Andre (Lotterer) did a fantastic job of driving. What he managed to do on the first two laps was brilliant. I was able to jump into the car and still had fresh tires. On my first lap, I was a bit cautious because the rear was a little unstable. The tires had probably cooled down a bit after the pit stop. The second lap was superb, the third one even better. The car felt great. We’re very pleased."

Loic Duval (Audi R18 e-tron quattro #2): “It wasn’t the kind of qualifying we’d been hoping for our car. We’ve got to find out why the performance was lacking because things had been going better yesterday and this morning. Maybe we made a mistake with the set-up. But this was just qualifying and the race will still be very long. We’re not starting far behind the others. We’ve still got some more work to do. Sincere congratulations to the drivers of our sister car."

Tom Kristensen (Audi R18 e-tron quattro #2): “Many thanks again to our squad. It did another superb job, considering that we lost a free practice session on Friday due to unfortunate circumstances. We had a decent qualifying session and are now looking forward to the race. ‘Well done’ to our sister car, the guys had a perfect run."

Allan McNish (Audi R18 e-tron quattro #2): “Our car was hit by an opponent yesterday. That cost us a practice session. Since then, we’ve been trying to catch up. Before qualifying, we made a few changes that didn’t work out perfectly. It wasn’t easy to put the performance on the ground and there was traffic on track. But the two Audi cars and the Toyotas are very close together. We’re no doubt in for a very tight race and are going to continue to work on the set-up to improve the car’s balance some more for Sunday."