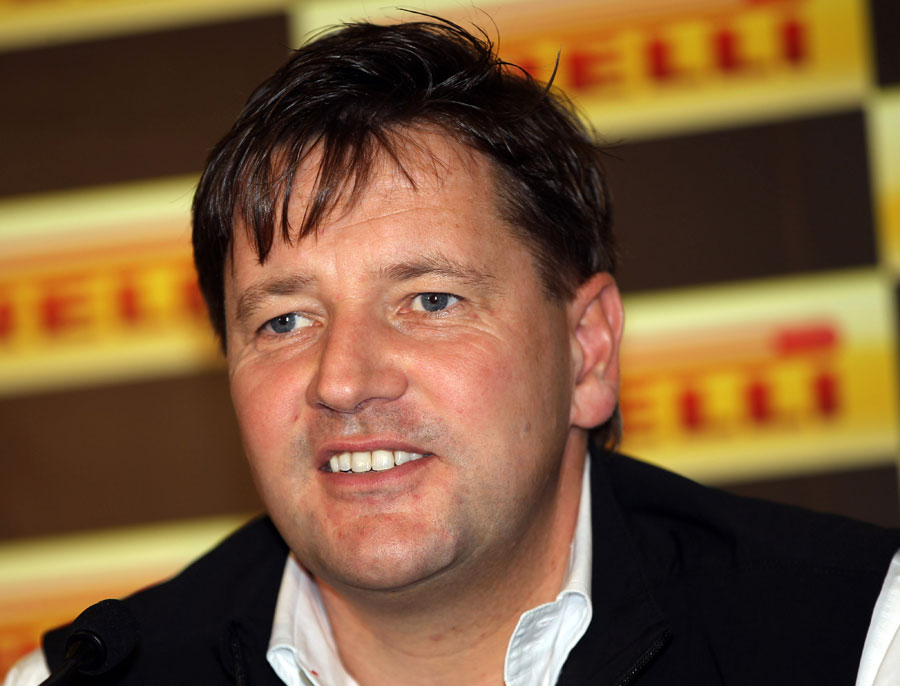 Spaniard Alonso had questioned the "quality" of Pirelli's 2013 tires.

Pirelli boss Hembery hit back: "I can only suggest he goes to ask the soon-to-be four time champion how to get the best from the same tires."

In the wake of the pointed retort, "We invited Paul for a chat," Ferrari's Alonso is quoted by the Brazilian newspaper O Estado de S.Paulo newspaper.

"He accepted, he came, he apologized and we understand (each another) now.

"It seems strange with the season they are having that they speak up, but, as I said, he apologized," he added.

And "Force India is now struggling for points," he explained.

"I also remember Sauber struggling not to be out of qualifying in Q1, and now they're fighting out the front of the race," he added.

Ferrari boss Stefano Domenicali admitted he sees both sides of the story.

"It is important to take the complaints of drivers seriously to help them (Pirelli) do a better job," he is quoted by Speed Week.

"But I also see Pirelli's position, because if they are not given the chance to test, that's not right."

'Perfect' Hulkenberg will be on 2014 grid – manager
(GMM) Fernando Alonso, widely acknowledged as perhaps the best driver in F1 today, has given a boost to Nico Hulkenberg's quest for a 2014 seat.

Because he is unsponsored and also arguably too tall for next year's heavier cars, it is rumored the German's push to simply stay on the grid in 2014 may fail.

That is despite his outstanding performance in Korea last weekend, where he held off a string of champions, including Alonso and Lewis Hamilton, in the increasingly impressive Sauber.

"He deserved to be in front of us," EFE news agency quotes Alonso as saying, "because he did a fantastic race.

"Sauber have been very good this weekend, they've done a great job," he added.

Alonso's comments may be interpreted as a slight against his own Ferrari team, because Sauber – who admit to have struggled financially this year and initially uncompetitive in 2013 – is powered by an identical Ferrari engine.

"I think he (Alonso) would love to leave Ferrari," said the hugely respected La Gazzetta dello Sport correspondent Pino Allievi, "but he cannot."

Alonso has also used Sauber as the prime example of how Pirelli's mid-season tire construction switch gave some teams a big boost, whilst hurting others.

But Hulkenberg is quoted by Brazil's O Estado de S.Paulo newspaper: "The new Pirelli tires help to explain what is happening with us, but it's not everything.

"We have also improved the car. I would say it's 50 per cent for both," he added.

Indeed, Hulkenberg has been sounding much happier at Sauber, where earlier it was considered very unlikely the 26-year-old will stay put for 2014.

"To say that I regret (moving from Force India) is a bit much," he is quoted by France's L'Equipe, "but I was not very happy because I wanted to make a step forward and actually it was quite a step back.

"But when you make choices in life, they can be good or bad but the best thing to do is to try to turn it around in your favor," Hulkenberg added.

"After seven or eight races, there were no real signs of improvement, but then suddenly there was a click." He is undoubtedly hoping that 'click' opens the door to better things in 2014.

But some in the paddock marvel at how arguably F1's hottest rising talent is still scrambling to secure a decent drive.

"You would just have to say that there weren't many top cockpits becoming available (for 2014)," Hulkenberg's manager Werner Heinz told the German newspaper Bild.

"We are still talking, but Nico will definitely go on in formula one," he insisted.

'No interest' in stopping boos on Twitter – Vettel
(GMM) Sebastian Vettel says he will not try to boost his popularity by jumping on the social media bandwagon.

It is has been suggested the almost four-time world champion's unpopularity among the fans is worsened because he refuses to connect with them via Twitter or Facebook.

Indeed, among his F1 racing rivals, only the odd and aloof Kimi Raikkonen similarly stays away from the hugely popular social media sites.

But Vettel is quoted by Brazil's Totalrace: "I have no interest in sharing everything I do in my life. Maybe I am too boring," the German joked.

Amid his current streak of domination, Vettel was booed when he won at Spa, Monza and Singapore.

But there was no booing in Korea at the weekend.

Some cynics might say that's because there were no spectators at remote and soulless Yeongam, but German-language commentator Marc Surer said: "In fact there was a surprising number of locals (on Sunday), and they were fair.

"Sebastian Vettel has a lot of fans," he insisted.

Lewis Hamilton insists that booing Vettel is wrong, but the Mercedes driver does admit the German's recent domination reminds him of the Schumacher era, when the sight of a red car strolling into the distance would send him to sleep in front of the television.

The 2008 world champion told Bild newspaper: "He's won this title already, unless he doesn't go to the rest of the races.

"But he'd probably still win it even then," added Hamilton.

It may be interpreted that some of Hamilton's recent comments indicate a lack of respect for Vettel.

But the Briton wrote on Twitter on Tuesday: "He (Vettel) is a great human being who is funny and humble. Deserves all the success he is having!"

McLaren hope to find Magnussen a seat in F1
Young Danish driver Kevin Magnussen and Belgian Stoffel Vandoorne both deserve to be in Formula One and will get there eventually, according to McLaren team principal Martin Whitmarsh.

Both are in the McLaren young driver program and are competing in the Formula Renault 3.5 series, which Magnussen leads ahead of the Belgian with one round remaining.

"I think both are really good guys and they both will get into Formula One and we've got a duty of care to get them there," Whitmarsh said of the 21-year-olds.

"I think they are both pretty special."

McLaren have had talks with Lotus, Force India and Marussia about giving an opportunity to Magnussen next season.

Lotus have a vacant seat to fill, with 2007 world champion Kimi Raikkonen leaving for Ferrari, although Germany's Nico Hulkenberg is seen as a strong contender for that.

The other two teams both had technical partnerships with McLaren but Marussia have now aligned with Ferrari while Force India have strengthened ties with Mercedes.

"(Co-owner and principal) Vijay (Mallya) has always taken the best drivers that he could afford. And I don't think he'll change that philosophy," said Force India's deputy team principal Bob Fernley when asked about Magnussen's chances.

"So when it comes to actually determining the drivers… we can put our recommendations in. And if Kevin is in that mix then so be it.

"I think we've got a situation coming up where there are going to be a number of very good drivers available," added Fernley. "I think McLaren have to look at it themselves really. If Magnussen is a wonderful driver, why not take the chance?"

Magnussen, whose father Jan raced without success in F1 for McLaren and Stewart after standing out in the junior series, impressed in young driver tests with McLaren. Yahoo Eurosport

Vettel chasing the biggest margin
Sebastian Vettel is on the verge of becoming the F1 champion again. But is he on the verge of making the sport’s biggest point’s margin? The current record stands at 122 points set by Vettel in the 2011 season, when he beat Briton’s Jenson Button. In the 2011 season Vettel had an advantage of 124 points with 5 races to go. He currently has a ‘lead’ of 77 points, also 5 races to go. After the Indian Grand Prix in 2011 (2 races before the end of the season) he in fact had an advantage of 134 points.

Still, the ‘real’ all time record is 67 points set by Michael Schumacher in 2002. And yes, because of the (then) different points scoring system. 67 points would equate to 6 wins, 1 second place and 1 sixth place. With the points scoring system in use now, this would be a sum of… (6 times 25 points, plus 18 points…) …176 points! Dusko Dragic

Lotus hints Hulkenberg not too heavy for 2014
(GMM) Nico Hulkenberg's hopes of moving up the grid in 2014 have received a boost, as he moves into pole position to replace Kimi Raikkonen at Lotus.

Red Bull's Christian Horner said recently that the German's tall height would have been an issue had he been in contention for a race seat next year.

That's because the new turbo engines are much heavier, which is marginalizing drivers like Hulkenberg, who is about 10 kilograms above the ideal weight of a F1 driver.

It is believed Hulkenberg's weight has put him on the back burner at McLaren, where Sergio Perez has not been a star performer in 2013, but he is ten kilos lighter.

Lotus boss Eric Boullier, however – who has already named Hulkenberg as well as the diminutive Felipe Massa as leading candidates for the 2014 seat – insisted that weight will not the tip the scales of the decision.

"We're more interested in the talent and potential of a driver rather than the difference of a few kilos," he told F1's official website.

"We have confidence in our development team to be able to produce a car for the 2014 regulations which should be competitive in the hands of any driver we consider for next year," added Boullier.

In a BBC report, however, the Frenchman admitted that issues of driver weight are "of course" taken into consideration.

Bahrain controversy subsides for F1 in 2014
(GMM) Bahrain has receded as a weighty political issue in F1, as the sport schedules back-to-back winter tests in the island kingdom.

Racing in Bahrain has been a highly controversial topic since the civil uprisings of 2011, when the grand prix was cancelled due to violence.

It has remained a contentious issue until now, but F1's 2014 engine makers – Mercedes, Renault and Ferrari – have selected the Sakhir circuit as the ideal testing ground for days of pre-season testing of the new turbo V6 units.

It will force the teams to be based in Bahrain for days and even weeks during the European winter, amid the prospect of another return to the kingdom for a reportedly floodlit race weeks later in April.

According to the Reuters news agency, however, the teams are much more relaxed about Bahrain these days.

"I think people are relaxed about going there based on their experience of this year," said Martin Whitmarsh, boss of the partly Bahrain-owned British team McLaren.

Mercedes team boss Ross Brawn added: "Quite frankly, it's not been a major topic, it's not been discussed, so hopefully we can have a quiet time there.

"There have been assurances about the conditions there," he said.

Brawn said Bahrain had emerged as the ideal venue for crucial pre-season running of the new engines.

"From the purely technical perspective, Bahrain is a more representative circuit," he said, undoubtedly referring to the more traditional winter test venues in Spain.

"We can test there (in Bahrain), we prefer to test there. It's the best, most suitable track at that time of the year," added Brawn.