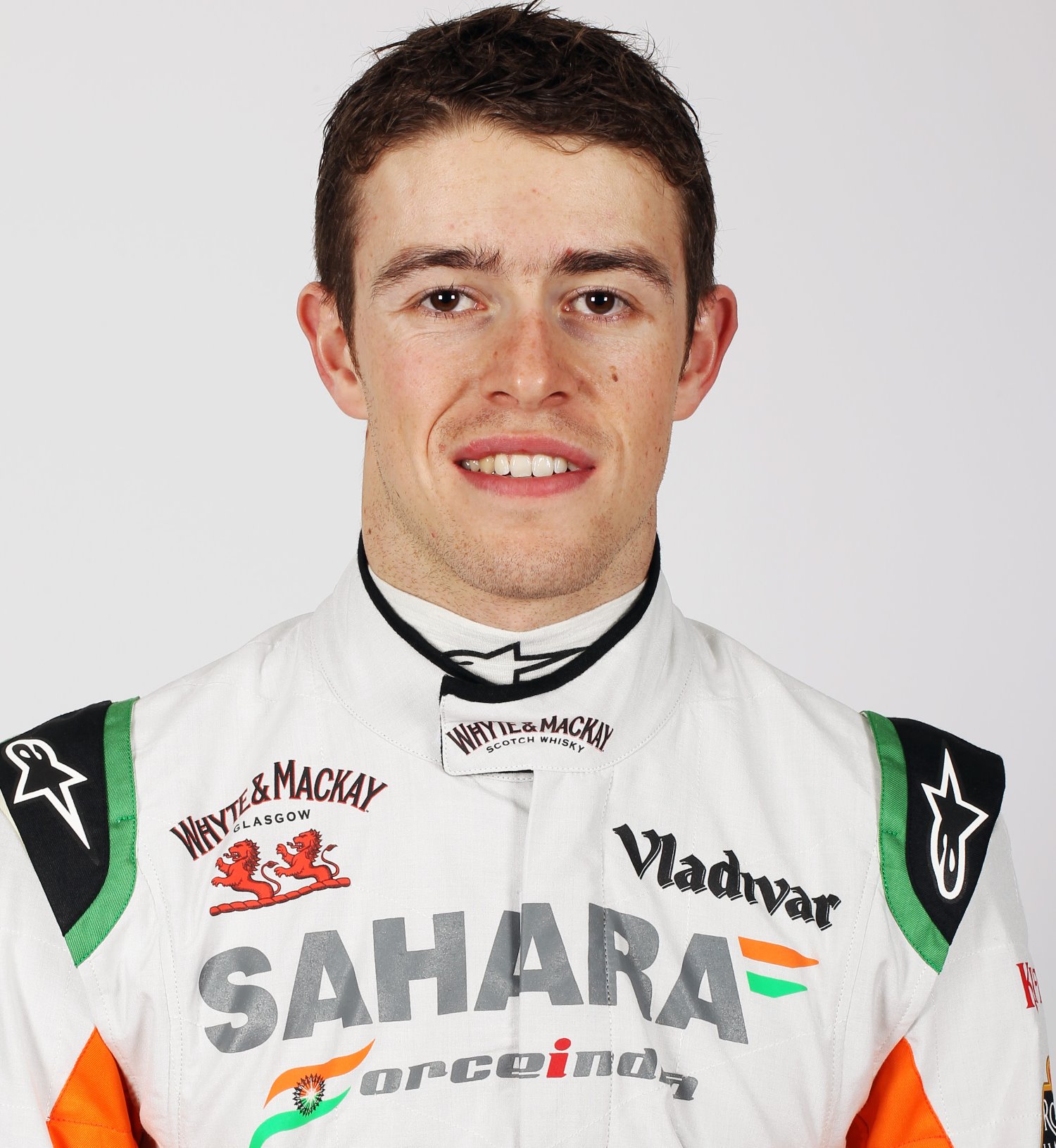 Di Resta admits Force India future uncertain
(GMM) Paul di Resta has admitted he is staring into an uncertain future in formula one.

Since debuting for Force India in 2011, the 27-year-old Scot has been pushing for a move to a bigger team.

But he may now be facing a challenge simply to stay on the grid, after crashing out of Sunday's Korean grand prix.

It was the latest in a sequence of driver errors for di Resta, who has struggled particularly after Pirelli's mid-season tire construction change.

"I'll hold my hands up, it's me who has made the mistake. I apologize to the team," he told reporters in Korea.

Not only that, but with the move to heavier engines in 2014, tall drivers like di Resta are suddenly even less attractive to teams trying to field cars under the minimum weight.

"It is a concern for a driver like me," said di Resta.

Asked about his chance of simply staying at Force India next year, he admitted: "It's a bit of a waiting game."

Deputy team boss Bob Fernley told Speed Week: "The driver question is not in my hands.

"It's up to Vijay Mallya and the shareholders. We will sit down in peace after the Indian grand prix and talk about the drivers for 2014," he added.

Fernando Alonso and Mark Webber in Korea slammed Pirelli for providing poor quality, heavily degrading products, but it was McLaren's Perez who actually suffered a scary accident in the race when his tire exploded.

"Pirelli will put the puncture of Perez down to a lock-up but the reason the drivers are locking up is because there's no tread left," Webber had said.

As predicted, Pirelli chief Paul Hembery did blame the Perez incident on a bad lock-up, but he said Webber was wrong to point the finger.

"There are two issues here that Mark is conflating," he said.

"It (Perez's failure) was nothing to do with the delaminations earlier in the season," Hembery told the Telegraph.

"The other issue about degradation is the same old story. We are only doing what we were asked to do, which is to create two to three stops per race."

Perez, however, was making the link between Pirelli and compromised safety.

"At the end of the day nothing happened," the Mexican is quoted by the AAP news agency, referring to injuries. "But one day something will happen.

"Nothing happened so after today nobody will comment on the situation, but one day something will happen so we will regret it," said Perez.

Keeping Hulkenberg in 2014 'possible' – Sauber
(GMM) As Nico Hulkenberg sweats on his future, Sauber is not ruling out simply keeping the highly rated German on board in 2014.

Earlier, with the 26-year-old linked with moves to Ferrari, McLaren, Lotus and even a return to Force India, it had emerged Hulkenberg's Sauber contract had been terminated amid Sauber's financial struggles.

But with tall and heavy drivers like Hulkenberg increasingly marginalized by the new 2014 rules, some had begun to wonder if the German would be lost to F1 altogether.

He would be a big loss. He finished Sunday's Korean grand prix a stunning fourth, and was crowned "the man of the race" by Mercedes chairman Niki Lauda.

"If someone is interested in me," he is quoted by Switzerland's 20min.ch, "they surely have been watching me for quite some time, not just one race."

Hulkenberg knows all too well that a single result, no matter how impressive, means little when it comes to signatures on a F1 contract — in 2010, he was ousted by Williams immediately after securing pole in Brazil.

Increasingly, teams are weighing up a driver's talent together with his purse of sponsors, and Hulkenberg's Dekra deal is not lucrative.

Since his 2013 Sauber deal was formally ended, however, the Swiss team has tied up with a group of Russian investors, and money has reportedly begun to flow.

That could help explain Sauber's impressive performance in Korea, where Lewis Hamilton rued the "incredible traction" as he failed to pass Hulkenberg's car.

Surely, Sauber must be making moves to retain Hulkenberg.

"It's a possibility for us to keep him," team boss Monisha Kaltenborn admitted.

So, after Korea, the race could be on to secure the talented German for 2014. Some sources said Sunday's result had tipped the scales in his favor at Lotus, who have also been considering Felipe Massa fir 2014.

"We have known for a long time, and he showed it again today, that he can drive at the front in a good car," added the Lotus boss.

Hulkenberg is quoted by DPA news agency: "My mobile is on."

Grosjean 'can be even better in 2014' – Boullier
(GMM) Romain Grosjean will almost certainly keep his place at Lotus beyond this season.

The Frenchman, however, had to be reminded to show his always-present smile on the podium in Korea, after a team orders dispute with his bosses.

Grosjean, who has struggled at times in the last two seasons, had outclassed his highly-rated teammate Kimi Raikkonen in Korea, and was set to finish second behind Sebastian Vettel.

But he made a mistake at the safety car restart, handing second place to the Ferrari-bound Finn.

Team boss Eric Boullier revealed Grosjean "begged for some team orders" to be handed the place back, but was not given the answer he was hoping for.

However, although it was Raikkonen who ultimately delivered the higher finishing place, Boullier told France's RMC: "I want to especially acknowledge Romain, who did an outstanding weekend."

Despite Sunday's events, he insisted Raikkonen is not receiving preferential treatment, even though the Finn is mathematically still in the hunt for the drivers' title.

"There is no number 1 and number 2," Boullier said. "Romain is free to race."

Told that Grosjean appears to have calmed down in recent months and is on a run of good form, Boullier agreed: "He is very serene.

"It has been six races in a row now that he is on the same level as his teammate, so he really is there," said the Frenchman, who also doubles as Grosjean's manager.

Asked if Grosjean still needs to prove himself in order to secure his seat for 2014, Boullier answered: "Obviously, if he continues like this, there is nothing (for him to prove).

No penalty for Korea after 'fire truck' incident
(GMM) Organizers of the Korean grand prix will escape sanction, even though a fire vehicle was deployed onto the racing line during Sunday's race.

The future of the Yeongam race was already under a dark cloud before the bizarre incident, in which leader Sebastian Vettel was stunned to find himself bearing down on a 4×4.

"I think it was a Hyundai or Kia SUV," said the German. "You want the number plate? It was not Bernd Maylander's, so it was not the safety car."

Korean officials had made a mistake, but it is not quite as serious an error as it first appeared.

Indeed, race director Charlie Whiting admitted that, although surprised to see the 4×4 on the track, he had in fact just ordered the deployment of a fire vehicle to help extinguish Mark Webber's worsening fire.

"We assumed they would send out the car that was in turn 3, because that's where the burning Red Bull was," Whiting told Germany's Auto Motor und Sport.

"It wouldn't even have had to go on the track," added the Briton. "But for some reason they sent the car that was in turn 2.

"I would say it was a classic misunderstanding," Whiting said.

Because it was more a 'misunderstanding' than a grave error, and because the marshals acted correctly in warning drivers with white flags, the Korean race promoters will not be penalized by the FIA.

"As this is their only race per year, they are probably just missing some experience," he said.

"I was actually relieved that a fire extinguisher was finally on the way to our car," he said. "It seemed to be burning for an age."

Hamilton: Vettel so good he's making fans fall asleep in front of TV
Lewis Hamilton fears Sebastian Vettel's Formula One dominance is becoming as much of a television turn-off for some fans as Michael Schumacher's relentless success was a decade ago.

Red Bull's Vettel is on the brink of a fourth successive title after winning Sunday's Korean Grand Prix from pole position.

His fourth victory in a row gave the 26-year old German a lead of 77 points over Ferrari's Fernando Alonso with five races remaining. If Vettel wins in Japan on Sunday, and the Spaniard is ninth or lower, it is game over.

"He has won already," Hamilton, who was fifth for Mercedes at Yeongam on Sunday, told British reporters. "Unless he doesn't finish the rest of the races, and even if he doesn't he has probably still won it.

"Personally I feel for the fans because I remember the period of time when Michael Schumacher was winning," added the Briton.

"I remember waking up in the morning to watch the start of the race and then going to sleep, and then waking up when it ended because I already knew what would happen. I am pretty sure a lot of people were doing that today."

Hembrey hits back at Alonso and Webber
Paul Hembery has hit back at Fernando Alonso and Mark Webber after both drivers criticized the Pirelli tires in Korea.

Qualifying down in sixth place, Ferrari driver Alonso was not happy with the rubber as he felt it had no staying power.

"The tires cannot do five kilometers. If you push them, you finish the tires. It's something that is not normal," he said on Saturday. "We have to be honest and the quality of the tires is very on the limit.

"But I'm not blaming the tires. That they are not good we all see with our eyes. It's the same tires for everybody…so it's a compromise we need to find."

Hembery, though, wasn't at all pleased with the Spaniard's comments and hit back, saying he should take a lesson from Sebastian Vettel on how to get the most out of the tires.

"Of course Alonso is one of the great F1 drivers, so to hear such comments is disappointing and below the standards you would expect from such a Champion," he was quoted by Reuters.

"I can only suggest he goes to ask the soon-to-be four-times Champion how to get the best from the same tires."

However, the criticism of Pirelli didn't stop there.

In the wake of Sergio Perez's tire delamination during Sunday's grand prix, Webber stated: "The tires are wearing a lot and they also explode a bit as well but that's for Pirelli to sort out."

He added: "The drivers aren't super important – it is what other people want."

And again Hembery has hit back saying their complaints are no different to Michael Schumacher's barrage last season.

"They are no different to maybe Michael's last year," the Pirelli motorsport director told Autosport.

"It is maybe a different input if you are having to manage the tires and you don't want to do it.

"If we had been asked to do no degradation and no pitstops then that is what we will have done."