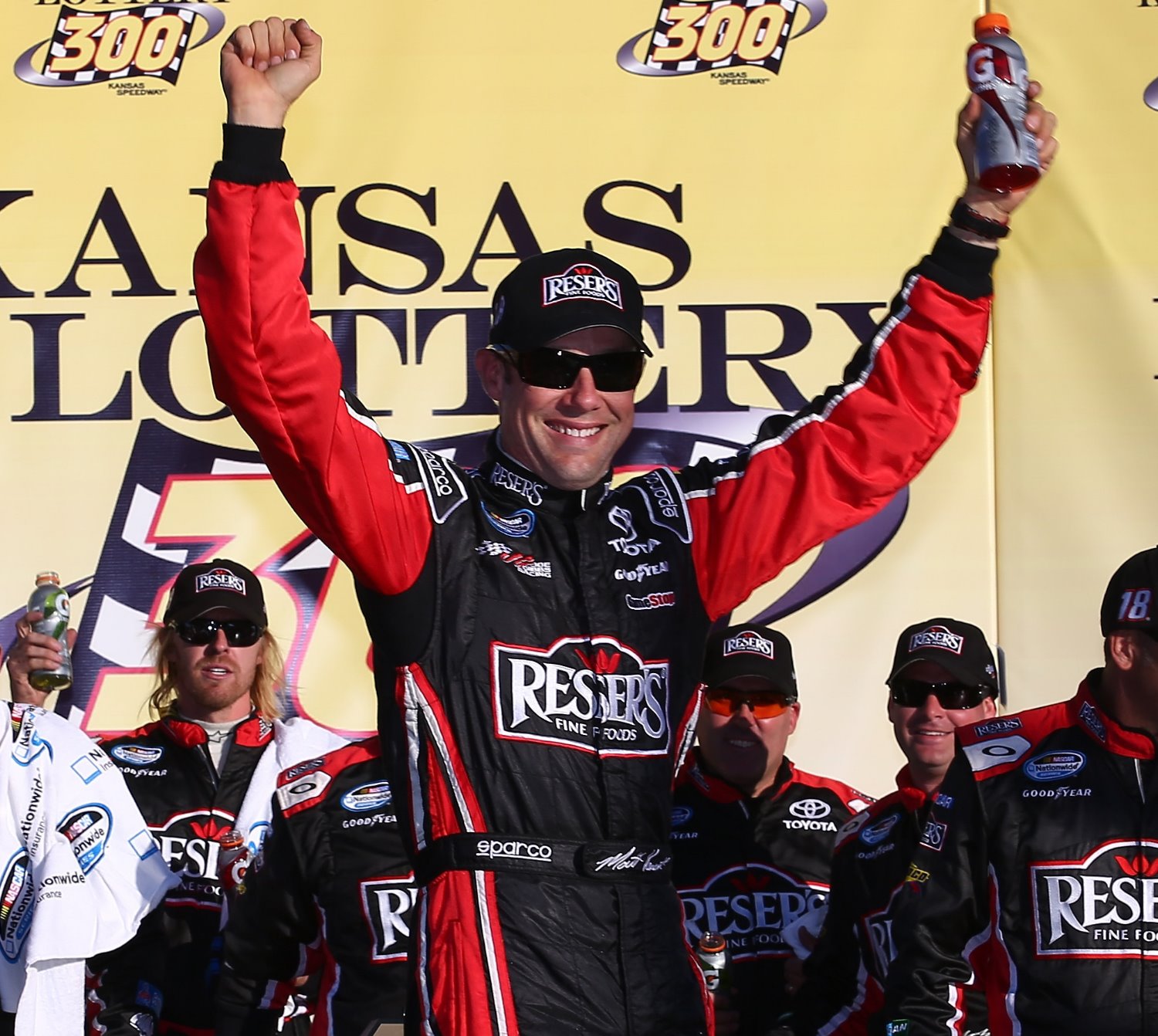 Matt Kenseth may have won Saturday’s Kansas Lottery 300 NASCAR Nationwide Series race at Kansas Speedway, but Kyle Busch and Brad Keselowski provided the most explosive fireworks in a wild race that featured 11 cautions in 200 laps.

Kenseth pulled away after a restart with five laps left and won going away, as Paul Menard edged Regan Smith for second on the final lap. Busch ran fourth after causing the final caution by sending Keselowski into the fence on Lap 188.

The victory was Kenseth’s second of the season in the NASCAR Nationwide Series, his first at the 1.5-mile speedway and the 28th of his career.

To Kenseth, the key to the win was his ability to clear the rest of the field after the final restart.

“I knew it was important to get going," Kenseth said. “Regan gave me a little bit of a push there. The 31 (Allgaier) was pushing the 54 (Busch) as well. I had just enough speed to get around ‘em off (Turn) 2. I had 'em cleared off of 2, which was a big key, because I could use the whole track from there."

Keselowski surged into the lead after a restart on Lap 151 but surrendered the top spot to Kenseth on Lap 166. Busch caught Keselowski a few laps later, and as the cars that were 1-2 in the owners’ championship standings battled for the second position, Kenseth’s lead expanded from 1.4 seconds to more than 2.5.

With Kenseth streaking away, Busch closed up on Keselowski’s rear bumper. Contact from Busch’s No. 54 Camry sent Keselowski’s No. 22 Ford spinning toward the infield grass and then back up the track rear-end-first into the outside wall.

“Really?!" Keselowski said incredulously on his radio as his car began to spin.

Keselowski climbed from his car, which was unable to restart, ran toward Busch’s pit and saluted his rivals’ crew, then headed full-speed toward the infield care center, as Busch and Kenseth rolled toward a five-lap shootout for the win.

But Kenseth pulled away after the restart as Busch was shuffled back to fifth, leaving Menard and Smith to settle second place between them on the final lap.

After the race, Keselowski expressed his displeasure and suggested he may exact retribution during the final seven Cup races. Busch is third in the Cup standings, contending for what would be his first championship. Keselowski, the reigning champion, missed the Chase this year.

“I got wrecked by a dirty driver," Keselowski said. “There’s no other way of putting it. He’s cool with that. I have raced him really cool over the last year to be respectful to him and try to repair our relationship…

“He put me in the fence in Chicago in the Truck race, and the Nationwide races he has been pulling this crap. It is not going to last, I can tell you that. I feel bad for the guys next to me (indicating the No. 54 team) that are going to have to fix his stuff. That’s going to be part of racing and they are going to have to deal with it…

Busch took responsibility for the incident but dismissed it as a racing accident.

“It was hard racing," Busch said. "There were a lot of moments where maybe I felt a little crowded, but the contact there that ultimately ended it… I just got real tight off (Turn) 4. I’ve been battling tight underneath him and behind him and everything else, and finally I thought I had a run, and I tried to stay in the gas so I could get a run on him and get to his quarter and side-drafted him down the front straightaway.

“I got too tight, got inside his wake and just got too close to him and spun him out."

As to Keselowski’s comments, Busch shot back: “Brad Keselowski knows what dirty drivers are because he’s done it plenty of times. But I have yet to wreck a person on purpose…I got wrecked for the Chase spot by Brad Keselowski (in 2012) and then had an opportunity to wreck him a few times throughout the Chase and didn’t.

“(I) let him and Jimmie Johnson battle it out on their own, and ultimately he won the deal. If I wanted to, I could have cost Brad Keselowski a championship, but I’m a bigger person than that."