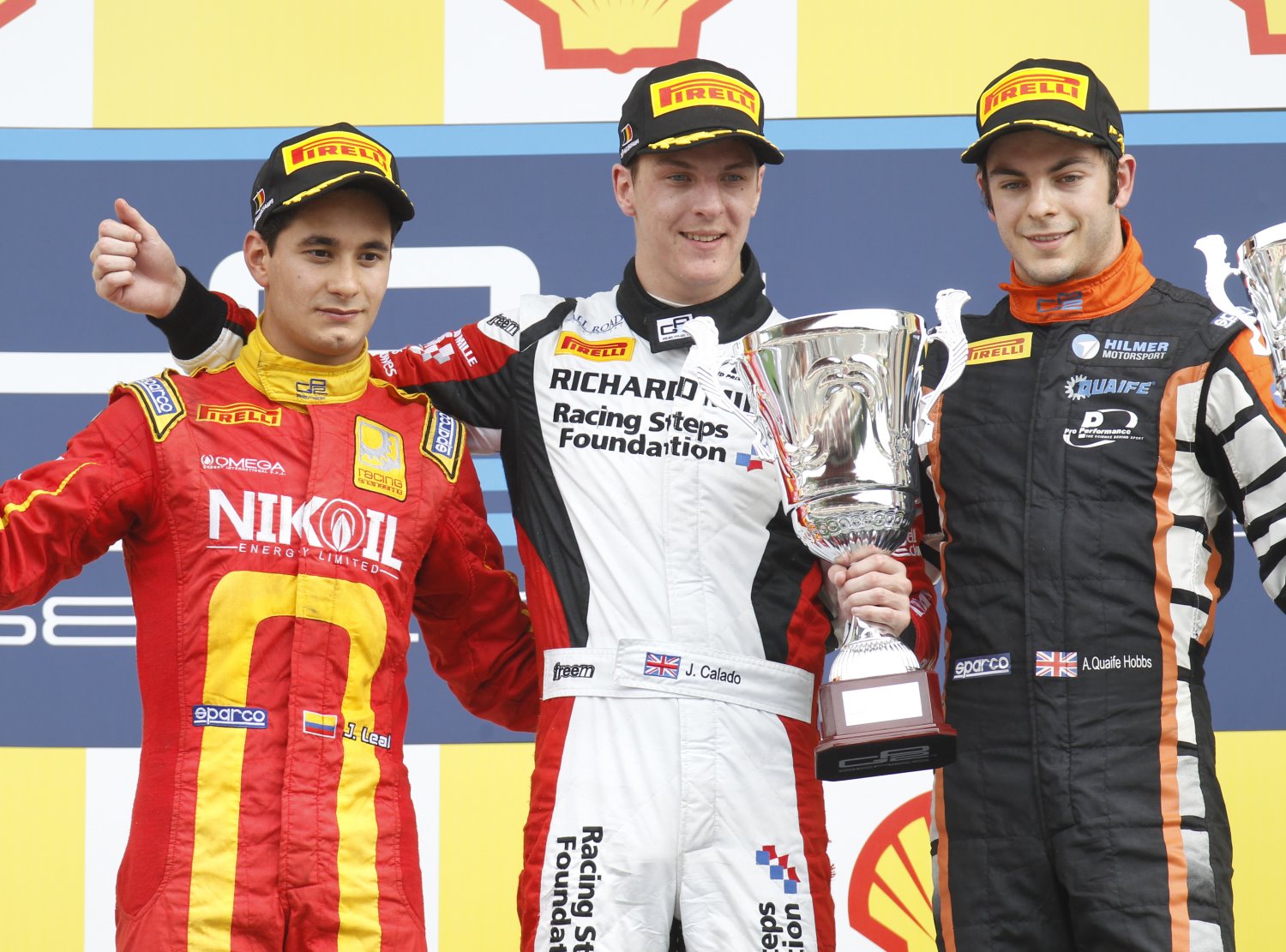 James Calado claimed his first win of the season from pole position in this morning’s sprint race at Spa-Francorchamps, but he didn’t have it all his own way: the Englishman built up an early lead before Julian Leal came back at his rival, pushing him all the way to the flag with Adrian Quaife-Hobbs right behind the pair.

Calado made a decent start when the lights went out, taking advantage as his fellow front row starter Stéphane Richelmi bogging down on a damp patch of track to lead the field into La Source, with Leal also squeezing by the Monegasque driver. Quaife-Hobbs made a great start from P8 to blast by Fabio Leimer on the Kemmel straight, while Series leader Stefano Coletti made an even better start from P13 on the option tires to steal fifth place from Leimer at the Bus Stop.

Calado was soon setting a string of fastest laps as he built a big lead over the Colombian, while everyone was looking to see what their tires could do. If Coletti was gambling on rain to make his strategy come off, it was a losing hand: Leimer pushed inside and through at La Source on lap 9, with the rest of the train soon blowing by as the Monegasque driver was left rueing another weekend of bad luck.

He wasn’t alone as Leal, who had clearly been protecting his tires, soon started taking chunks out of Calado’s lead each time through, with Quaife-Hobbs also closing in. The leader was doing everything he could to take his first victory at the famous circuit, but the Colombian was all over his rear wing and looking for more.

Calado was forced to watch his mirrors for the final few tours, but was inch perfect in his lines: Leal just couldn’t find a way by and had to make do with second for his first ever GP2 podium, just 0.4 off Calado as the flag dropped, while Quaife-Hobbs followed them through in third. Richelmi spent most of the race on his own for fourth, with Leimer losing too much time behind Coletti to close up. Jolyon Palmer endured another torrid race after being hit by Dani Clos but held on for P6 ahead of Johnny Cecotto, while Tom Dillmann had huge pressure from Felipe Nasr on the last lap and was forced into an error at the Bus Stop before cutting across for the final point.

Despite another bitter weekend, Coletti holds onto his lead in the drivers’ championship from Nasr by 135 points to 129, with Leimer closing in to 128 ahead of Bird on 121, Calado on 111 and Ericsson on 82 points, while Carlin leads the teams’ championship on 197 points from RUSSIAN TIME on 185, Racing Engineering on 170, with Rapax and DAMS both on 153 points ahead of the next round at Monza in two week’s time.