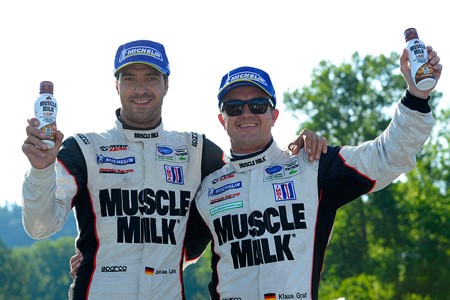 Lucas Luhr said there is one thing about his No. 97 RW Motorsports/Sarah Fisher Hartman Racing Indy car that is particularly noticeable.

"It's nice to see your front wheels again," said Luhr, a five-time American Le Mans Series champion, who will make his IZOD IndyCar Series debut this weekend in the 85-lap GoPro Grand Prix of Sonoma.

Luhr logged a few reconnaissance laps Aug. 13 on the 2.385-mile, 12-turn road course during a manufacturer/team test, and got extended track time during an Aug. 21 Open Test to prepare for the race weekend.

He totaled 44 laps with a best lap time that was less than 2 seconds off front-running Dario Franchitti (1 minute, 18.2945 seconds). It's not where he's used to running, but he's not concerned.

"The whole car has a different feel. Pretty much everything is new," said Luhr, who last competed at Sonoma in a GT sports car in 2000. "With a new track and new car, everything is challenging. But we're getting there. Coming in as the new guy is not going to be easy, but that's why I'm doing it. If it was easy everyone would do it."

The challenge intrigues and drives Luhr, 34, which in a roundabout way led him to this event as Sarah Fisher Hartman Racing expands to a two-car team through a partnership with RW Motorsports. While with Penske Racing in 2006, driving the RS Spyder in ALMS, he accepted Roger Penske's invitation to watch the Indianapolis 500 in person.

"That really made me interested in the series," he said. "There's been a few times where ALMS and INDYCAR race during the same weekend, so I followed it and would stay an extra day to watch the race," he said. "I was always interested in it and followed it, but on the other hand I never really pushed to get in it or have a chance at trying it. Now that this opportunity is here, it's even better."

The series will be linked next week at Baltimore, where Luhr and co-driver Klaus Graf will seek their sixth consecutive victory in the Muscle Milk car in the two-hour race Aug. 31 on the 2-mile street circuit. The IZOD IndyCar Series' Grand Prix of Baltimore presented by SRT is Sept. 1.

This weekend, Luhr has lesser expectations. The prospect of additional races in 2014, which would carry higher expectations, is being explored.

"Because the competition in INDYCAR is so tight, it doesn't necessarily mean if you don't have a good result in terms of numbers that you didn't do a good job," he said. "I just want to do the best job that I possibly can for the team and we will see how it goes."