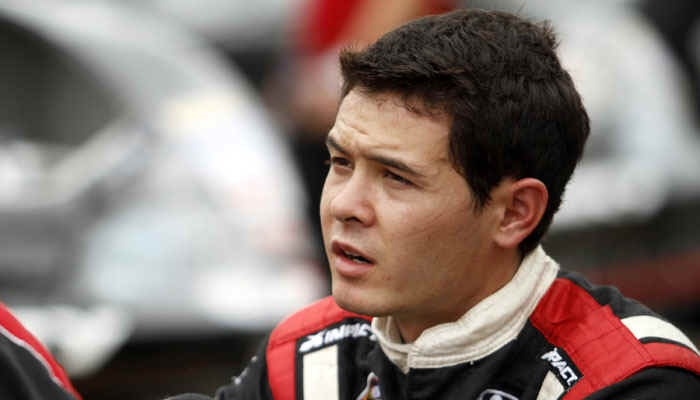 Throughout the weekend at Michigan International Speedway, several Sprint Cup drivers who had made the move to the top NASCAR level at a young age were asked about the adjustment. Those questions pertained to the possibility that Earnhardt Ganassi Racing could move 21-year-old Kyle Larson into the No. 42 car starting next season. Juan Pablo Montoya won't return to the seat, and Larson is considered one of the top young talents in the sport, but many fear moving him to Cup could curb his development and ruin a bright future.

Only in his second full season of stock-car racing, Larson sits ninth in the Nationwide standings while driving for Turner Scott Motorsports on loan from Earnhardt Ganassi Racing. Larson has been lauded by Tony Stewart, Jeff Gordon and others for his racing ability, which has produced several major sprint-car victories as well as a truck win at Rockingham. The typically mild-mannered Larson just went about his business of racing the Nationwide car last week at the Mid-Ohio Sports Car Course a little bit oblivious of all the talk about him in Michigan, but obviously knowing his name is circulating heavily in the rumor mill.

"I didn't know that people had been asking the Cup guys if they thought I was ready or not yet," Larson said in a phone interview Monday. "I thought it was really cool that a lot of people thought that I was speculated about going in the 42. I think that says I'm doing OK. I don't know if it will happen or not, but I'm not really worried about whether people think I'm ready or not."

With several sprint-car races on his schedule this summer and the full slate of Nationwide races, Larson said he hasn't had much time to think about his future. He believes he could handle Cup as far as racing but would have to get used to a schedule filled with longer events and several more sponsor and media commitments.

Larson believes he could handle the mental stress that could come with being a rookie at the major level. Sporting News

08/18/13
With Juan Pablo Montoya exiting the #42 Earnhardt Ganassi Racing Chevy at the end of the season, speculation has quickly turned to potential replacements. Kyle Larson, 21, is under contract to the organization for eight years, but from an experience standpoint, he has less than one full season of NASCAR Nationwide Series racing under his belt. The way #48-Jimmie Johnson sees it, that may not be a big issue — and Johnson ought to know.

After learning the sport with limited success in NASCAR Nationwide cars, Johnson made the jump to NASCAR Sprint Cup and has dominated that division in terms of race wins and titles since he joined the series full-time in 2002.

"When you look at Kyle's background (Sprint Cars), he's driving cars with far more power than grip," Johnson said before Friday's practice. "I think the Cup car will suit his style far better than a Nationwide car. But you do need that foundation of knowing these tracks, because when we show up, our fastest lap we'll run all weekend will probably be our first lap right now. And if Kyle Larson wants to go to Cup next year, that's tough to do. He's going to need the whole session to get where he needs to, and then you're five or six adjustments behind the fast guys." NASCAR Wire Service