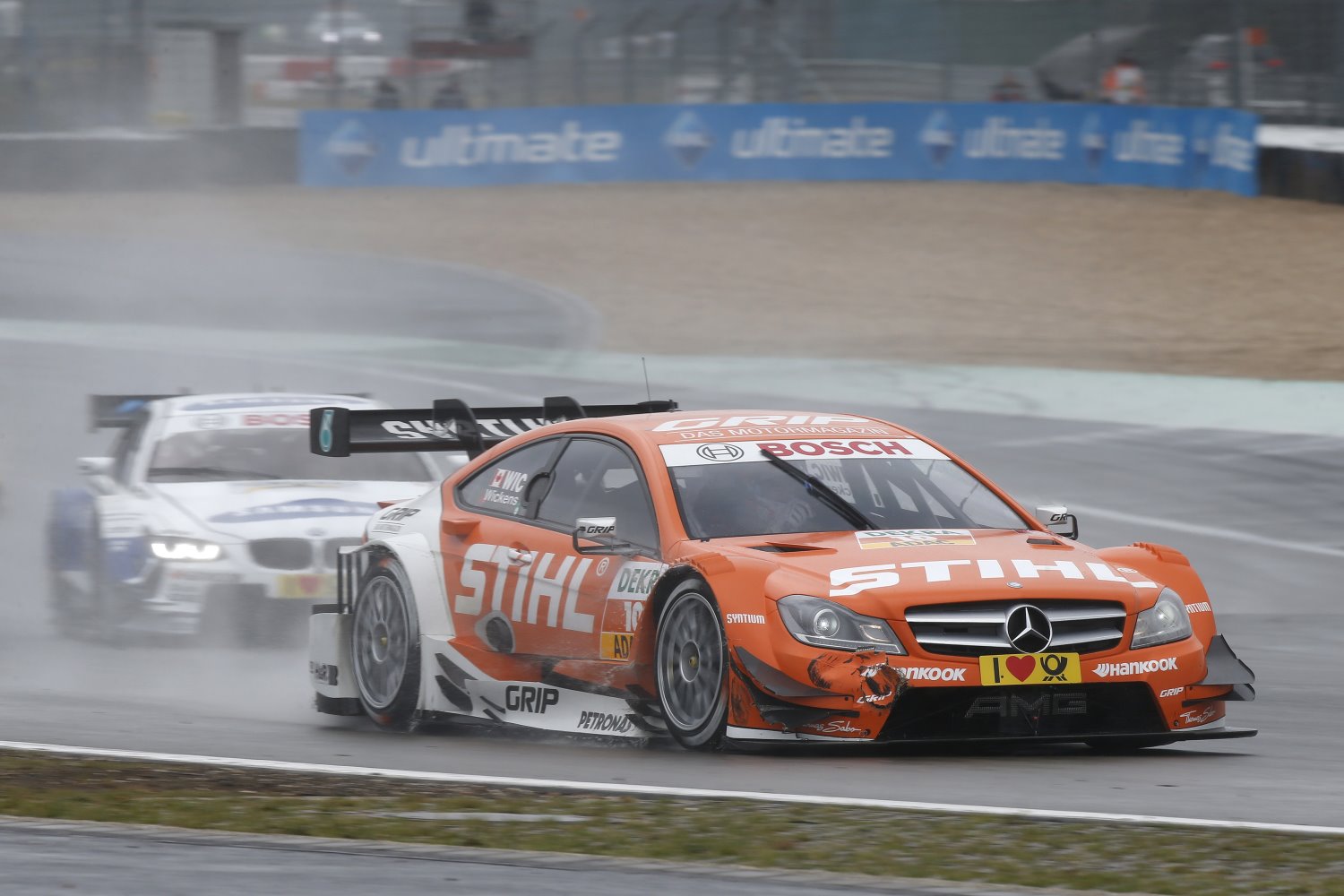 At the Nurburgring, Robert Wickens has scored the maiden victory of his DTM career. In typical Eifel weather with heavy rain showers at the start of the race, the Mercedes-Benz driver moved up from seventh place on the grid to the front with skilful overtaking maneuvers and was the first to take the checkered flag after the maximum duration of the race of 75 minutes, having completed 47 of the scheduled 49 laps. “It was an incredible and crazy race. Our pit stops and the tire choice were perfect, my team has done a great job. I am overjoyed with my maiden victory in the DTM," Wickens said after his triumph.

Augusto Farfus (BMW), who started from pole position, continuously improved after weaker start and was among the fastest drivers in the field during the closing stages, secured second place. “The race was like a lottery. We didn’t know how the track was, which tires we had to take. In the first few laps, I lost a lot of time in the heavy rain and I wasn’t able to make up for that towards the end, but second place is a great result," the Brazilian said. With his DTM Mercedes AMG C-Coupé, Christian Vietoris finished third and moved up to second place in the drivers’ standings ahead of race winner Wickens.

However, Mike Rockenfeller was the real winner at the Nurburgring. With twelve points for fourth place, the Audi driver extended his lead in the championship standings to 35 points and thus came a big step closer towards his maiden title in the most popular international touring car series.

Having innocently become involved in an excursion off the track right after the start, the 29-year old had dropped back to 20th place, but used the subsequent safety-car phase to become the first driver to change to rain tires. Rockenfeller moved up into the lead on lap six, which he only lost after his second mandatory pit stop just before the end. “In the first corner, I was hit and initially, I was only busy with keeping my car in control. My team has done a tremendous job, the strategy was perfect. But I am not thinking about the championship yet. Today, we have seen how quickly things can change," the dominant DTM points’ leader said.

After all, for Bruno Spengler, his main rival to date, the string of bad luck continued. Having innocently become involved in a collision, the BMW driver had to race with a damaged car at the 3.629 kilometers long track for a long time and only finished 14th. Thus, the defending champion from Canada dropped back to fourth in the drivers’ standings. For Gary Paffett (Mercedes-Benz), whose team got it wrong with the tire choice, things were even worse. In the rain, Paffett drove too long with the option tire that is actually meant for dry conditions and eventually was classified in 17th place. Thus, the Brit’s title chances have been significantly reduced as he is now 49 points down on the leader. Martin Tomczyk (BMW) and Miguel Molina (Audi) scored their first points of the season in fifth and eighth place respectively.

Toto Wolff, head of motorsport Mercedes-Benz: “It was a great race, especially for the spectators. There were some tough battles, particularly halfway through the race, but that is what DTM racing is like. For Robert and Christian, our strategy worked out perfectly. For Gary, we tried to do something differently and that didn’t work. But that can happen."

Jens Marquardt, BMW Motorsport Director: “Congratulations to Mercedes-Benz, they have made the fewest mistakes. For Augusto and Marco, we opted for different strategies in order to see which one is working best. Bruno’s car was damaged in a collision, so he wasn’t able to push in the same way as the other drivers when the track dried out. However, he is a sportsman and in Oschersleben, he will fully attack again."

Dieter Gass, head of DTM Audi: “Surely, that was the most thrilling and spectacular DTM race of the year. I think that the spectators got great value for money. Thanks to a clever strategic move by his team, Mike Rockenfeller has made another big step towards the championship and now has an advantage of 35 points. The strategy with three pit stops and changing to rain tires during the safety car phase worked out well and eventually was rewarded."